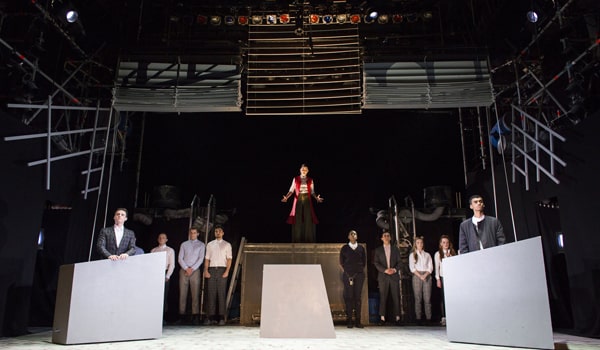 Since 2012 the National Youth Theatre has presented a ten-week repertory season at the Ambassadors Theatre, the culmination of an estimable training programme which seeks to provide a training programme for young actors without the huge burden of costs involved in drama school enrolment. Each season has three plays in which the sixteen players all perform in different roles. This season’s Shakespeare is the abridgement by Tom Stoppard of The Merchant of Venice, first performed in Beijing back in 2008, just ahead of the Olympic Games. The play is produced on the set of Stomp, the current resident production in the faded bling of the Ambassadors.

As a performing version, Stoppard’s adaptation works admirably on the technical level. The running time is reduced to some ninety minutes, which means the whole play could be done straight through without an interval – and I wish that had been the case here. The clean lines of the plot are maintained while quite a bit of the supporting material is stripped out, without too much sense of dramaturgical loss. The focus is on the formation of the bond and its consequences, the casket scenes at Belmont, and the culmination of the trial and all that flows from it. Only the final, and frankly tiresome, business over Portia and Nerissa’s rings is allowed to hold up the propulsive narrative direction.

On the level of character and emotion I still have some doubts. As a result of the changes made it is a play where the merchant rather than the moneylender is in the spotlight. The play is made more Antonio’s than Shylock’s. So what, you might ask? Surely that is the title of the play. However, if Antonio had been the main focus of his attention then Shakespeare would have filled out his character more elaborately than he does. He is meant only to be foil to Shylock, the catalyst for forcing us to confront the uncomfortable knot of issues at the heart of this play. If he becomes the centre of attention then we never actually have to deal with the unresolvable paradoxes of the play with their full disconcerting vigour. 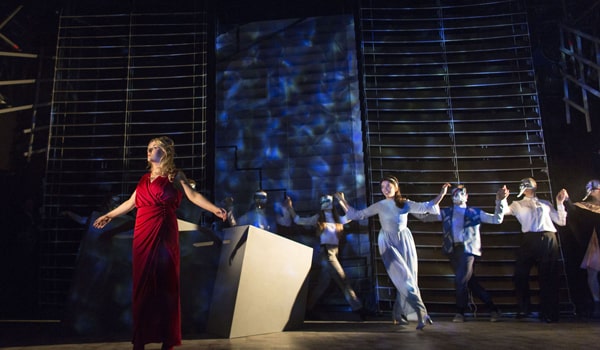 Director Anna Niland has decided to make this a highly contemporary production. The setting is brought forward to modern Venice and the themes we are encouraged to think about include the current migration crisis in Italy and demonstrations against austerity. Protestors in masks, whether Venetian or porcine, intervene at points to threaten disorder. This is fairly lightweight, gestural stuff, and falls away when the playing gets serious. By the trial scene we are back in a straight production, and everyone seems much more comfortable.

More thought-provoking is the attempt to develop the theme of Shylock as an insecure ‘alien’, as Portia labels him in the trial scene. There is a lot more potential mileage here in trying to explain his unwillingness to accept any form of compromise as a protest at the way contemporary society uses him shamelessly as a convenient source of capital without ever accepting him as either moneylender or Jew. However, this line of interpretation never reaches full development partly because of an under-characterised central performance from Luke Pierre, and because of the way Stoppard has stripped the character back, most especially in removing much of the material covering his relationship with his daughter, Jessica (Francene Turner), now an underwritten role. 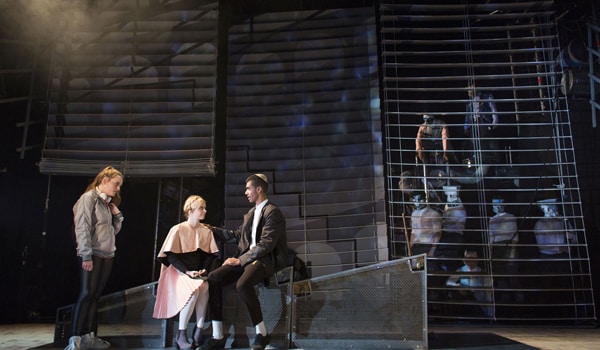 The dramatic highlights of the production are the ‘two trials’, whether of the three lovers at Belmont or of Shylock’s bond back in Venice. The first can often and in the wrong hands seem a tiresomely prolonged pantomime gag, but here there are delightful and sustained comic moments. Paris Campbell plays the Prince of Morocco as a blinged-up, moon-walking rapper, who inevitably goes for gold. As the Prince of Arragon, Lauren Lyle steals the show in a ‘Tango por Dos’ routine which had everyone in the audience laughing out loud. And between them Jason Imlach’s Bassanio and Melissa Taylor’s Nerissa turn the final casket choice into a chuckling, game-show parody.

The trial scene is the test of any Portia’s mettle, whatever the contrasting challenges of the Belmont episodes. Alice Feetham built up her performance carefully and forensically and was helped by the excellent acting of Andrew Hanratty as Antonio, who was the perfect foil in providing the emotional anguish for her to channel rhetorically. While he delivered the text capably, I was still surprised that Luke Pierre’s remained very low-key and low-wattage at this point. You have to see Shylock reach out to touch and savour his moment of triumph only to see it shrivel in front of him. While this is naturally a role that would fit a much older actor and is therefore a very hard ask, a wider dynamic range should be in reach than was on show here.

There are many fine touches of characterisation here among the smaller roles. There were suggestions of a gay or at least homoerotic sub-text between Antonio and Bassanio that struck me as a promising line to develop further; there was plenty of felicitous and inventive business from Taylor’s Nerissa and Cole Edwards’ Gratiano that gave a lot of pleasure, and Imlach’s Bassanio had many moments of grave dignity that suggest he will be a strong player in tragedy. 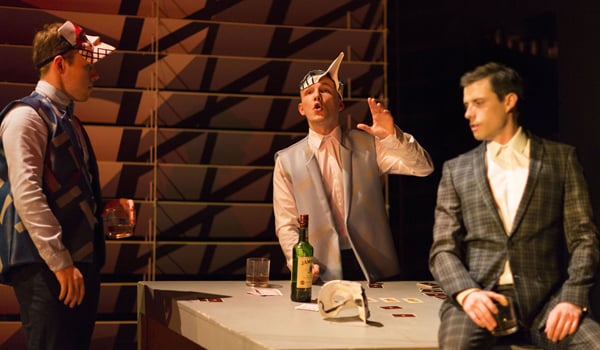 The creative team used the constraints of a pre-existing set to good advantage. There was not much space on the forestage to develop, so slatted blinds were used to open up backstage at intervals for lighting and chorus effects. Three wooden boxes doubled as court furniture, the three caskets, a night club bar and Shylock’s counting house. There was always sufficient suggestion of specific locations with enough space left for effective movement and choreography.

The music and sound scheme were uniformly excellent and imaginative, the work of Tristan Parkes: we began with a lazy scene-setting night club number, and then moved to Belmont which seemed to be one all-night disco after another…and why not? Portia is a rich heiress with time on her hands. This is a play where music is magically invoked at different points and there were all types of music floating past evocatively that enhanced our experience of the text rather than detracted from it. Perhaps my favourite touch was the regular creaking of ropes to remind us of the uncertain fate of Antonio’s argosies. This creative team have the makings of a wonderful production of The Tempest between them – we enjoyed a city, if not an island, ‘full of noises’, and perhaps this might be a choice of play for next year?

This production is clever, adroit and technically accomplished with a wealth of new ideas, some superficial, and others with real potential. While the emotional wattage did not burn as brightly as it might, and while we were never really made to feel fully uncomfortable with either issues or text as we should, it provides a showcase for many players of real talent. It is no surprise to read in the programme that all the actors that have graduated from this programme have found agents and gone on to work somewhere in creative industries.