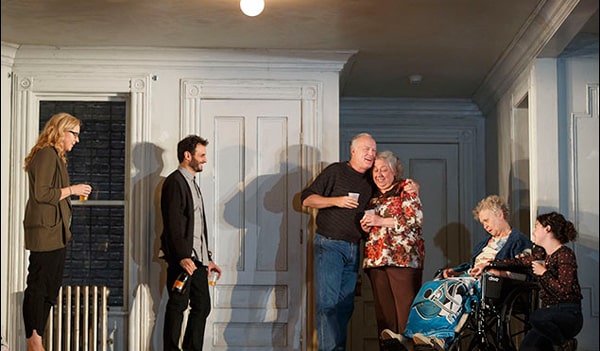 So, let’s see. What might you expect from a new drama about family?

Secrets that parents keep from their children? Secrets that children keep from their parents? Rituals that have been built up after years of family occasions? The awkwardness of a child’s partner interacting with the child’s parents. Enforced high spirits. Health issues either broadcast widely or subsumed in diffident chat. Religious disputes. Money disputes. Unexpected revelations blurted out, quiet suffering, open suffering, shock surprises, pauses that provide perspective, shared understandings and misunderstandings. Statements that work on two or more levels, shadows and shocks that interrupt routine. Clutter, accomplishments and care, with or without strings.

What you might not expect is a set which seeks to literally represent many of these issues. There are two levels of the apartment where the action takes place, just as there are two levels to much of the conversations that take place there. You can hear something whilst upstairs, which changes things, and the speaker, downstairs, never knows. There are dark, unlit spaces upstairs too, so shadows can have corporeal function and, again, conversations can be overheard or interrupted unexpectedly.

Light bulbs fail, bringing more shadow. Only the bathroom remains a working, lit space, a reminder that soiled items can always be cleansed. You hear the extraneous and often very loud noises of outsiders, wonder if they are judging you. A female neighbour, an after-dark laundry user, seems always to be commenting on the family, when, really, she is just going about her own rituals.

This is The Humans, a new play by Stephen Karam, now having its premiere season at Roundabout’s Laura Pels Theatre, in a production directed by Joe Mantello. Fitting, perhaps, for a play about a family Thanksgiving, this is a turkey, albeit one with some excellent trimmings and a surfeit of stuffing.

Karam’s script attempts nothing new, particularly insightful or intriguing, either in form or content. Essentially stock characters do and say essentially stock things. There are a handful of twists, some acerbic humour, some situational humour, and some genuinely touching moments. There are class and generational issues, betrayals, confusions and devotions. It could be an extended holiday episode of any number of television series.

There are, however, two ways in which Karam’s work steps up to the mark: the dialogue is believable and genuine, splendidly touching in places; the narrative is uncompromising, as families so often are. There are no pat solutions or happy endings here – just a slice of suburban transitional life.

All of this has the result that if the play is to achieve any momentum or purpose, it is the cast which must embellish the material with remarkable, penetrating and utterly believable performances. Happily, the cast with which Mantello animates Karam’s work is, without exception, first rate. 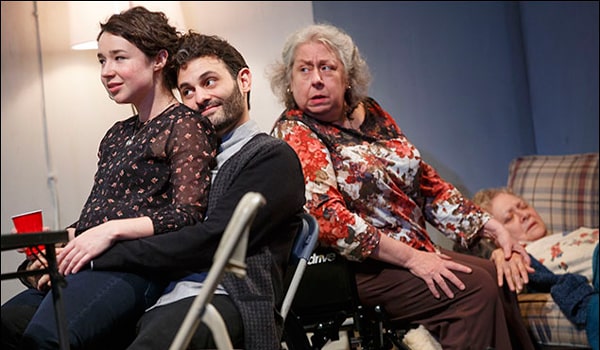 Jayne Houdyshell, one of the very best actors working on Broadway, is superb as the matriarch of the Blake clan, Deirdre. She is utterly real in every respect. The scenes where she is assisting her lost-to-dementia mother-in-law (a first-class performance from Lauren Klein) are full of frustration and resignation; her dealings with her husband and offspring, brutally honest but laced with weary, completely unrestrained love.

A scene at the Thanksgiving table, where Houdyshell suddenly became teary about her daughters, was beautifully judged, as were her occasional silences and huffy bouts of indignation. With dextrous clarity, Houdyshell provides a masterful portrait of a woman, wife, mother, mother-in-law-to-be and daughter-in-law, with all the blessings and burdens that comes with that. She hides her pain but revels in her burdens as equally as her blessings.

As the patriarch with waning power, Reed Birney is excellent. This mercurial actor transforms his physicality, becoming the lanky, balding, out of control Erik. He shows the character’s commitment to the women in his family, but also his limitations. He is judgmental and fractious with his daughter’s live-in boyfriend, unwilling to seek help from anyone and unable to accept help when he needs it. Birney reveals an alpha male in terminal decline; a manned unmanned by his manliness.

As the younger daughter, Brigid, the one playing Thanksgiving hostess, Sarah Steele is a model of exasperated kindness. She strives to keep all parties happy, aligned, coping; she is the perfect peace-keeper, even if her teeth are often clenched with understandable irritation. Steele makes a real effort to establish a true sense of being related to Houdyshell and Birney (who reciprocate with conviction).

Arian Moayed makes a great job of the outsider-who-is-almost accepted, Richard, Brigid’s partner. His silent slog in the kitchen is nicely judged, and when it comes to his inevitable, itchy collisions with his girl’s relatives, Moayed treads the careful line of the hopeful: holding his ground, not apologising for who he is, but not unnecessarily confrontational either. Likeable but strong-willed.

As Aimee, the older sister and, somewhat inevitably the one with a broken relationship, Cassie Beck has the hardest gig. Her part is under-written and she has little to do but be wistful about the female lover with whom she has parted ways, make a difficult phone call and be exasperated about the foibles of her parents. But Beck charts these waters exceptionally, finding nuance and layers to her character which reap rewards. 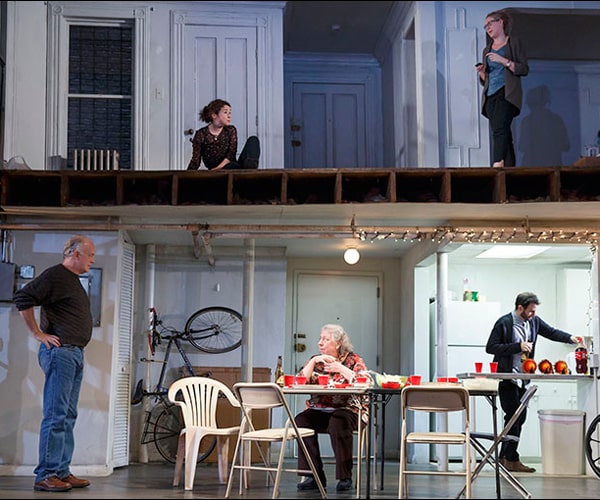 Given the inherent limitations of the writing, Mantello does as good a job as any director might be expected to do. At one point, I wondered if the piece might work better with no set save a table, if the starkness of an impressionistic setting might be beneficial. But, no: Mantello is right to use a full set, even one as obvious as the one David Zinn provides here. There is, it turns out, some surprise in an unsurprising set.

Karam should be grateful indeed to this cast, especially Houdyshell and Birney; they provide grounded realism, accessible acting which prevents the “big reveal” from being nothing more than laughable.

Even so, there must be greater plays than this for Roundabout to champion.

The Humans runs until 27 December 2015 at the Laura Pels Theatre. Book Now.