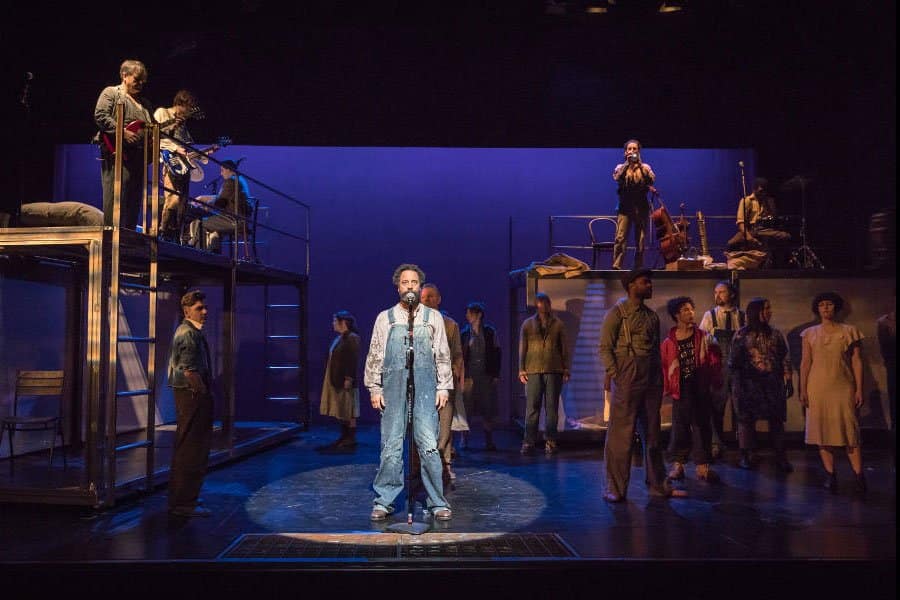 In 2017 any production of an adaptation of ‘The Grapes of Wrath’, must score 5 stars for its topicality; John Steinbeck’s 1939 novel of the dispossessed Joad family migrating through hostile lands, suffering physical hardship, prejudice, exploitation, and disillusionment on the way is absolutely the sort of tale that theatres in Leeds, Southampton and Nottingham should be telling. Laura Hopkin’s twin cuboid steel set evoked eerie reminders of the jungle camp in Calais and that was only one of many parallels between Steinbeck’s angry tale and events of recent times. 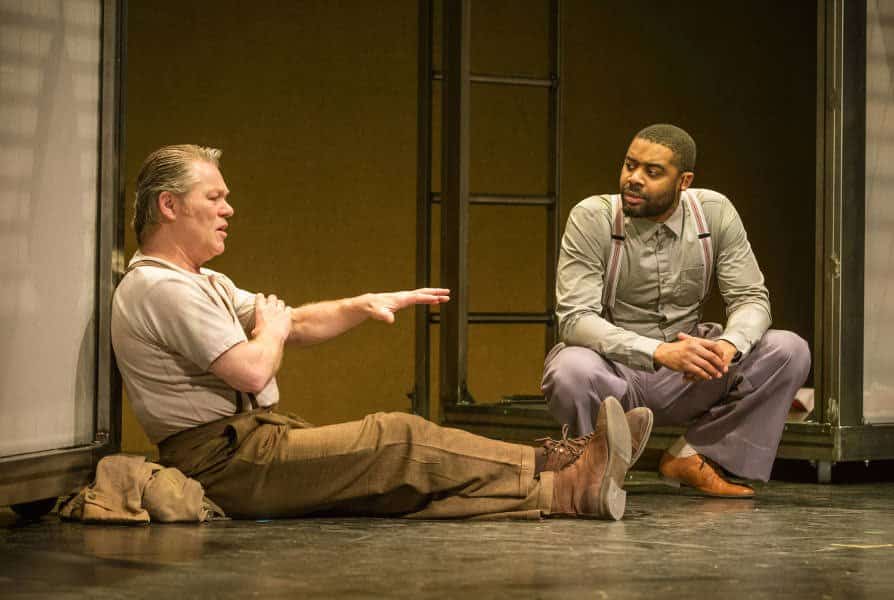 However, unfortunately, the execution of the production didn’t match the intent. Part of this was down to the script; Steinbeck’s sweeping epic prose, telling the story at a measured pace has been translated into scenes that felt languorous rather than urgent. Lengthy initial exchanges where drama was diluted by dialogue may have matched the heat and hopelessness of life in the Oklahoma dust bowl but unfortunately made it difficult for the audience to emotionally bond with the characters; owing to a combination of accents and acoustics meant some even had difficulty in working out who some members of the Joad family actually were. Certain technicalities caused further problems- for example by only allowing us one onstage meeting with the Granma (an energetic Pamela Merrick) it was impossible to care too much at her demise several scenes later.

The production itself had its work cut out to compensate for these problems and was only in part successful in doing so with occasional magical moments, such as a lone spotlit character playing an eerie melody on a saw. The journey across the desert to California was hampered by the leisured pace of the beginning; there was also a lack of clarity in the staging- I thought the family were in a truck, the person I was with was sure they were traveling on the roof of a train. Staccato and sometimes lengthy musical interludes by Matt Regan may have matched the discord of the character’s lives but they failed to gel with the action impeding rather than enhancing the drama. The combination of these factors meant the families eventual arrival at the sunlit vista of orange groves and hope that was California just wasn’t the dramatic moment it was intended to be. 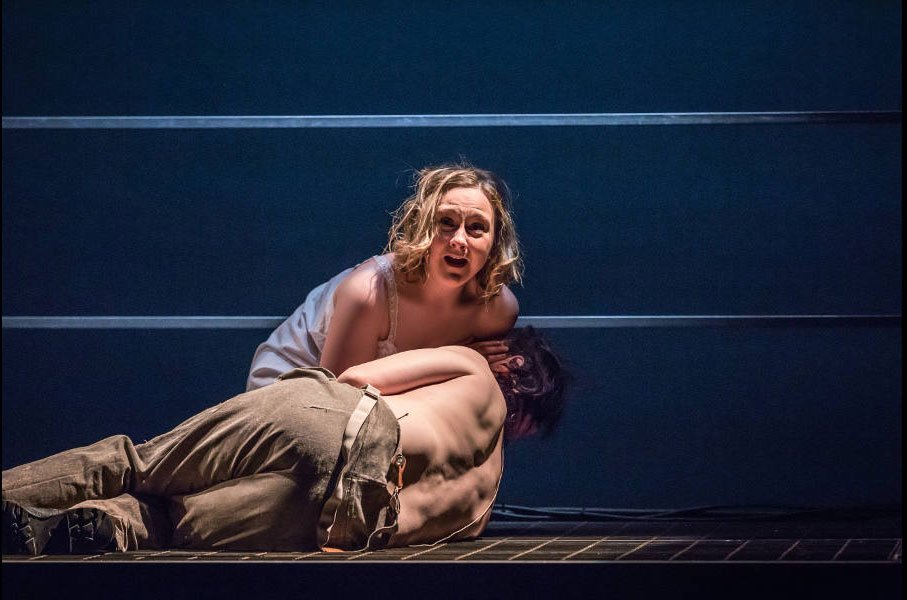 All of this was a pity; there were some strong performances inhabiting Steinbeck’s characters, notably Julia Swift as the mother who has seen, celebrated, prayed for and mourned most experiences that the times could throw at her and still come out strong and Andre Squire as Tom, the son struggling with a mix of anger at the injustice of the world and a pragmatism that leaves him with little choice but to accept that injustice.

The second half saw a welcome quickening of pace; the drama provided by the migrant’s clashes with exploitative farmers gave much-needed energy as confrontations, killings, and firestorms flashed across the stage- but again there was confusion as characters disappeared from the action in a way that had me looking at the programme in an effort to work out who they were and where they might have gone to. 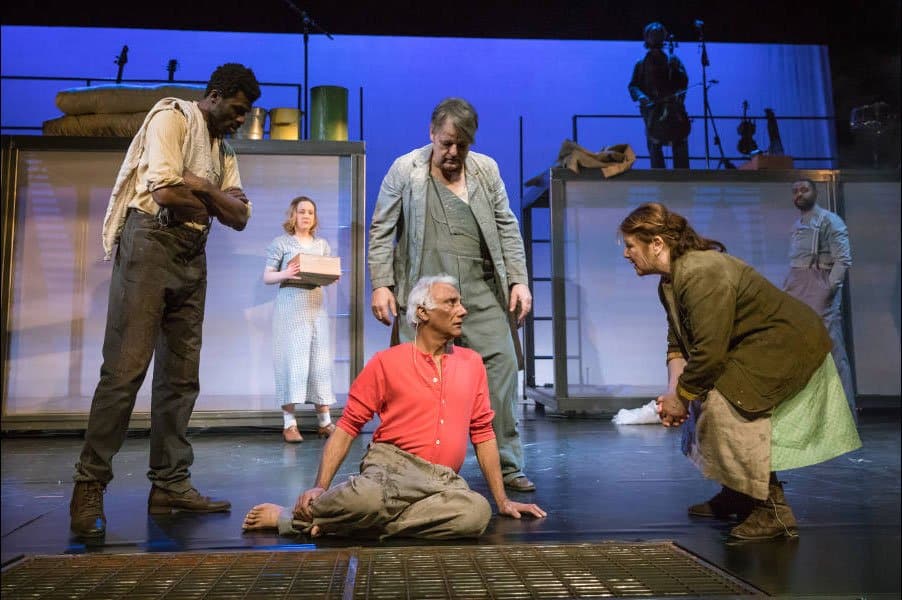 A final word concerns the committed and dedicated community cast. Having seen to what brilliant effect such a cast can be used in the recent production of ‘Romeo and Juliet’ it was a shame to see a similar cast, so under utilised here.

True they provided a milling, shambling and brooding presence on the Joad’s s journey, but too often they were left in stillness; their potential power could have added a much welcome shot of power to a story we all need to see.

BOOK TICKETS TO THE GRAPES OF WRATH AT WEST YORKSHIRE PLAYHOUSE

Jonathan Hall is a playwright and teacher; his plays have been staged at the Edinburgh Fringe, The Chelsea Theatre and the Bush Theatre. He works with new writing and fringe theatre in the West Yorkshire area and is co-chair of Script Yorkshire, an organisation that supports and develops local writers.