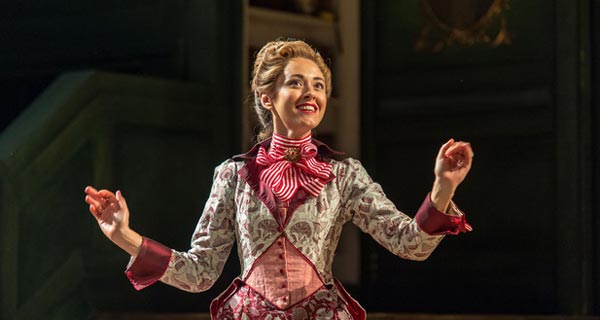 The great international director, Ian Judge, has always held to the view that Green is not a good colour for Comedy. It’s just not a funny colour he says.

He also tells the twinkling tale of the night that he and Donald Sinden were attending a very unfunny production of Much Ado About Nothing. At the start of the interval, Judge turned to Sinden and remarked how difficult it must be for Sinden to sit through this production “especially when you had had such a big success with Judi (Dench) in the play”. “Ah yes”, replied Sinden, “but then it was much easier for us, because we did it as a Comedy!”

Watching Simon Godwin’s revival of George Farquhar’s 1707 comedy, The Beaux’ Stratagem, now playing in the Olivier at the National Theatre, one could not but dwell on Judge’s musings. Lizzie Clachan’s set is very very green; an almost bilious green. No doubt there is a sensible intellectual point about the green – perhaps it represents jealousy or avarice, states which can be found in many of the characters; perhaps it is meant to sum up the marriage of Mr and Mrs Sullen, as bile-infused a union as might be imagined.

But, whatever the reason, Judge is correct. The ever present green does not sit easily as a basis for laughter and joy. Clachan uses a single set and by the imaginative use of false panels, in shades of red, rose and pink, transforms the all-green vista of Boniface’s Inn to the more feminine arena of the home of Lady Bountiful. While this lightens the mood, the green is still everywhere, and while the colours do work together, they reflect, largely, the way in which the Sullen marriage works – only just, and without any special pleasure.

What is most curious about all of this is that the production is in the Olivier. The playing area is vast and there are all manner of hydraulic systems available to a designer. Given the inherent duality in the script (town/country, rich/poor, happy/unhappy, plotter/victim) it is a little surprising that Clachan did not opt for a revolve, or some other tricky mechanism, so that the Inn and the Bountiful manor could be two distinct places, with their own energy, style and colour. Occasionally, the transition of the set has not completed by the time a new scene starts, and this dampens the crispness of the requisite contrast.

But then it is difficult to understand why anyone thought the Olivier stage was the right one for a revival of this play or, if they did, why it would be played the way it is. Farquhar has many scenes between two people where they confer, gossip, fight, plot, argue, hope, confront and flirt (sometimes all at once) and, unaccountably Godwin has many of those scenes played across vast distance. Hardly any of these scenes are played as they should be – closely, with giggling, intensity, whispering, intrigue and sheer unrelenting hope or viciousness (depending on who is involved). No. Performers are placed like chess pieces on a vast board and conduct their intimate discussions across rooms or balconies, rather than close enough to share breaths.

Finally, tonally, Godwin seems to be striving for something other than pure comedy, fantastical fun. If one looks at A Funny Thing Happened On The Way To The Forum, one sees a clear use of a simple device – an opening number which sets the tone for what is to follow and which promises silly, hilarious nonsense. Godwin opens this production of The Beaux’ Stratagem with a solo (nicely composed by Michael Bruce), sung a little plaintively, solemnly, by a servant lighting candles. It might be the opening of a play by Synge or O’Casey, but it does not herald a rambunctious comedy about dissolute, desperate coves seeking wives with dowries to pay their debts and secure their social status, wily servants, silly French officers, a brigand or two and an unhappy and, well, sullen marriage. It’s not clear at all why music is needed to open this show.

But then not much about Godwin’s intent here makes much sense. This is especially surprising given that his last two outings for the National, Strange Interlude and Man And Superman, demonstrated a real gift for taking classics and giving them a modern feel while holding on fast to the author’s intentions, sensibilities and expectations.

For a man who managed to wring every laugh out of Shaw’s very long and complex Man And Superman, Godwin fails to rustle many laughs from Farquhar’s joyful, farcical, frothy nonsense. Perhaps he was sidelined by that part of the play which echoes John Milton’s Divorce Tracts, where Mrs Sullen and her brother discuss the necessity for divorce when marriage is cruel and unjust. (Divorce was, at best, a novelty and, at worst, an impossibility in the society which first saw The Beaux’ Stratagem). Whatever the reason, Godwin’s decisions here do not result in a frothy, light comedy.

Partly, this is down to the set, the staging, and the moody incidental music. Partly, it is down to the very naturalistic style adopted by the cast – we are no longer in 1707 but the attitudes, mores and thinking of that time is infused in the writing; the style of playing needs to at least nod to that, at best, revel in it and bask in the consequent possibilities for mirth.

Of all the cast, it is the gifted Susannah Fielding who comes closest to the right style of acting. She really is a tremendous performer, winning in her winsome style, with a voice as agile as her facial features and just as expressive. She keeps her Mrs Sullen to the naturalistic style Godwin has chosen, but you can feel, just below her gorgeous exterior, that within lies the right style, the right character, the right attitude, desperately wanting to break out of the confines of naturalism and take shape in proper Restoration Comedy mode.

Both Samuel Barnett and Geoffrey Streatfield are reliable, excellent actors but neither hit the mark here. Their characters, Aimwell and Archer, are two lovable, preening, cads, great, great friends who have seen many drinks, debts and scrapes together and who come to the country in a last ditch attempt to find wealthy women to marry to secure their futures (not their hearts) and social position. If they fail, death on the fields of battle as military men is their likely future. These are desperate, driven, mates – yet, Barnett and Streatfield seem more like jolly holiday jokesters. It is not their fault; they fit Godwin’s conception.

In the second part of the play Farquhar moves from pure Restoration Comedy style – Aimwell confesses his real plan to Dorinda whom he has properly fallen for and the Sullens agree to separate. There is a real focus on the folly of class etiquette. These matters were fantastical when Farquhar penned the play; the trick any production faces today is to find the way to recover/expose that fantastical quality. However that might be done, Godwin does not score a goal here.

This production highlights one of the great troubles facing theatre today. Many audience members do not know, have never seen the classical repertoire, and so have no expectations or benchmarks against which to judge modern productions. A competent but not inspiring production of a classic play, even a bad production with a good cast, can therefore strike a chord with modern audiences – because of the inherent strength of the classical material.

Especially at the National, all productions from the classic repertoire deserve appropriate, intelligent and exciting productions which illuminate the original framework and setting (and this can be done in non-traditional, experimental ways) and let the classic work shine – just as Godwin’s Man And Superman did so well so recently.

Alas, this production of The Beaux’ Stratagem does not rise to greatness. For those who know the play and appreciate what it could be, this is a tepid, misconceived, lost opportunity. More pantomime than late Restoration Comedy. But for those to whom the play is unknown, this version will, no doubt, be enjoyable enough.

This is the third production in a main house of the National under Rufus Norris’ directorship. While it is better than the other two, it is fair to say that the future of the National as an artistic flagship powerhouse is far from secure.

The Beaux Stratagem runs at the National Theatre until September 20, 2015