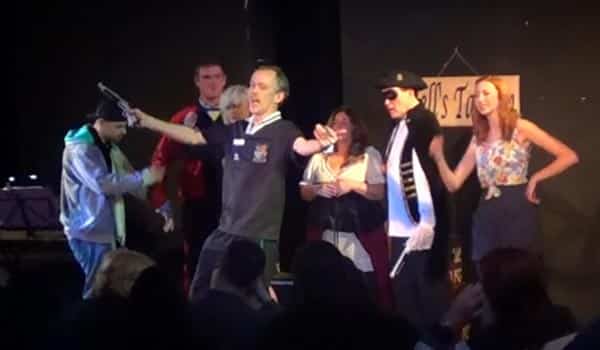 Stand and Deliver is a curious piece of theatre, now playing at the King’s Head in Angel. There are some very funny moments reminiscent of Carry On, some football humour that many fanboys across the country will enjoy, and a dash of 1980s nostalgia in the form of some fantastic chart toppers, but ultimately, as a piece of theatre, it does not hold together in present form.

Structurally, the piece seems to want to be several plays at once—it both wants to be about football and fanzines, yet also with a bizarre twist of time travel to the 18trhcentury for its second half. Other than all of the characters intermingling between the two seemingly near-separate stories, the third component equally surrealistic component is 1980s songs sung by the cast throughout the production.

Some of the singing is very good, particularly Adam Scott Pringle and Laura Coutts, however other than the homage to the 1980s and the connection to the football club, the story based justifications for this jukebox musical then become muddled in the second half when our lead, Frank Goldenboy, as performed by Alex Murphy, has a go at being an early 18th century highwayman.

Even this bizarre twist doesn’t quite work, because, yes, there is an odd heroic view of these robbers who preyed on travellers, but because writer Wayne Gumble is trying to do so much, we don’t get to know Frank well enough to see why he fantasizes about robbing coaches in the English countryside.

Similarly, there are two narrator characters played by Sara Lynam and Joey Bartram that are very funny, and extremely well executed, but they seem to be almost in their own play.

There is a kernel of a great show here. There are specific gags that work exceptionally well. The second half is significantly stronger than the first, moving at a quicker pace, while also containing a plot with a real drive forward—making it far more grounded, and thus more accessible and rather enjoyable.

With a more tightly conceived book, these disparate worlds of football, English history and 1980s music could very well work together.

Audiences love to know what they’re sitting down to watch—and considering we only meet the time travel device when we’re about to get our interval drinks, this show spends half of its stage time on a highway without map, GPS, or even sign posts. Unlike Frank, this show isn’t actively trying to steal such a precious commodity as your time—it’s just as equally lost.