Simple black walls. Six plain, old fashioned, wooden chairs. A lanky man is sitting in one looking down, possibly mumbling, possibly praying, possibly just being. He is lit interestingly, something about the lighting suggesting something portentous. He wears all black: black collared shirt, black trousers, black socks and shoes. His lips are a garish blood red, one drop of colour in an ocean of blackness. He is still.

Then the auditorium lights go out and he comes quickly to attentive, insistent life. His face and features contort, slowly but grotesquely. Fagin, the wrongdoing Jew, perhaps Dickens’ most famous character, is suddenly there, larger than life (a point to which we will return) and charging Morris Bolter (aka the odious Noah Claypole) to go in sear 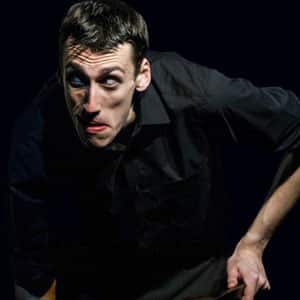 ch of and to spy upon Nancy of whom he has become sharply distrustful. You can almost hear Big Ben chiming down the countdown to her murder, so full of gripping, ominous promise is every word that Fabin lugubriously utters.

This is Sikes & Nancy, an adaptation of chapters from Charles Dickens’ Oliver Twist by James Swanton, who also performs the material, in a production now playing at Trafalgar Studios 2, part of a double bill with Miss Havisham’s Expectations under the banner Dickens With A Difference.

Never were truer words spoken. This is Dickens with a difference. No question. And both productions are entirely different from each other.

Dramatic adaptations of the vile murder of Nancy by Bill Sikes, her lover and tormentor, are not a new idea. Dickens himself originated the notion on November 14, 1868. The author was well known for his impressive dramatic recitations of parts of his loved and lauded material, but he was unsure about whether Sikes & Nancy would work for or, perhaps more correctly, be appealing to audiences of his time. Charles Kent, who was there for that original performance recorded this in his diaries: “Four of the imaginary beings of the novel were introduced, or, it should rather be said, were severally produced before us as actual embodiments. Occasionally, during one of the earlier scenes, it is true that the gentle voice of Rose Maylie was audible, while a few impressive words were spoken there a1so at intervals by Mr. Brownlow. But, otherwise, the interlocutors were four, and four only: to wit-Nancy, Bill Sikes, Morris Bolter, otherwise Noah Claypole, and the Jew Fagin. Than those same characters no four perhaps in the whole range of fiction could be more widely contrasted. Yet, widely contrasted, utterly dissimilar, though they are, in themselves, the extraordinary histrionic powers of their creator, enabled him to present them to view, with a rapidity of sequence or alternation, so astonishing in its mingled facility and precision, that the characters themselves seemed not only to be before us in the flesh, but sometimes one might almost have said were there simultaneously. Each in turn as portrayed by him meaning portrayed by him not simply in the book but by himself in person-was in its way a finished masterpiece.”

That is not, however, the approach Swanton takes. Yes, he seeks to carve out the characters separately, and he does that in a quite extraordinary way, but there is a consistency about the characters too which comes from the way he uses his voice and the style of performance Swanton embraces.

Without doubt, Swanton has one of the most impressive and mellifluous voices of anyone under the age of 40 who has set foot on a London stage in recent years. It’s deep, obsidian, full of velvet colours and sharp acidic tones: the vowels are rounded, over-rounded often, the consonants never swallowed, each given due weight and attention; the timbre of his voice is remarkable, echoing the kind of impression Scofield or Gielgud could leave hanging in the air behind their phrases and sentences.

But he does not choose to employ traditional notions of pitch, pace and pause to help differentiate the characters he plays in quick succession. No. His voice remains in a central place, mostly, and he augments it with physicality – extended fingers, clasped hands, crooked hands, elongated chin, hunched form, shrunken form, the tallness that comes from certitude of conviction and massive, violent authority which makes his entire body seem taller, thicker, broader than he is; changes to the way he uses his mouth; and his eyes, over which he exercises complete control. He doesn’t blink when he doesn’t want to and is unafraid to show the whites of the underside of his eyeballs.

All of this plays into the Grand Guignol relish of the piece. When the blood comes, it is both surprising and plentiful. The hanging scene is monstrously effective, as is the moment when, in Sikes mode, he describes the burning of the weapon which murdered Nancy and the single strand of her hair disappearing into flames.

Given the many films and the much loved stage musical, people tend to forget quite how brutal Sikes’ murder of Nancy is and where it actually happens – the room they share, where she is waiting, asleep, for his return. It’s horrific. And, to his immense credit, Swanton conveys every iota of the horror of that event.

He is aided by simply astonishing lighting from Matt Leventhall. Every change of mood, change of scene, change of character is profoundly aided by Leventhall’s skill. It is genius to watch. And helps enormously to cover the flaws in the production. So does the ghostly smoke/fog which comes unexpectedly but welcomely.

For while Swanton is utterly remarkable, he needs a director. It is not remotely clear what the point of the performance is by its end. There is so much wallowing in language and physicality, and not enough contrast between the heightened extremities and the ordinary everyday, that, although it looks and sounds wonderful, and the story is chillingly told, it just doesn’t quite work.

Swanton is doing something more than telling a richly detailed story by playing all the characters. Dickens did that. Swanton is doing something else which involves his entire body and his phenomenal voice. He is acting from the tip of his head to the top of his toes; every part of him is in play at all times. It is fascinating to watch, but so unbroken as a style it begins to cloy.

Perhaps Swanton is developing an entirely new form of performance style and one just needs to adjust to that. Even if that is the case, a director would no doubt be of benefit.

Many of the scenes are two-handers and Swanton simply needs to find a way to distinguish more astutely between each of the two in the scene – one is always the over-the-top one and one, by comparison to the first, is always more “normal”. This distinction needs to be part of the fabric of Swanton’s physicality and vocal dexterity in order that the highs and lows of the piece can be achieved. At the moment, there is a consistency which robs the work of an overall effectiveness it ought to have. If you are always flying with the sun in your eyes, eventually you cannot see where you are going.

Even so, he leaves you with an indelible Fagin, a monstrously brutal Sikes, a scared and discarded Nancy, a cautious but aristocratic Brownlow, and a ghastly, slippery and disgusting Bolter/Claypole. You emerge from the theatre not really quite sure how you are meant to react to what you have seen – but you are quite clear you have seen a master craftsman at work.

Sikes and Nancy Runs until Jan 3, 2015 at Trafalgar Studios 2