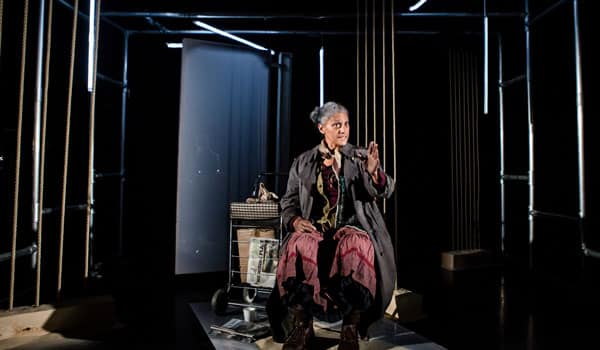 There is a great deal to admire about She Called Me Mother, a play which gives a voice to the homeless and victims of abuse. In the programme notes Michelle Inniss, the playwright, explains the inspiration for her protagonist, a 70 year old Trinidadian immigrant named Evangeline Gardner:

“Evangeline’s character was inspired by a homeless woman I spoke to over a period of a year from 2006-2007. She sold the homeless magazine, The Big Issue, in London Bridge station. Instead of calling her aunty, which is a mark of respect for an elder in the Afro-Caribbean community, I unwittingly called her “mother”. Her eyes lit up and she smiled.”

Inniss goes on to explain how her regular interactions with this woman caused her to question how she had lost her home – what had come before, and where were her loved ones now?

Evangeline (Cathy Tyson) lives a simple existence – every day she waits for a woman called Teresa, who reminds her of her estranged daughter, Shirley (Chereen Buckley). Teresa’s daily kindnesses fill Evangeline with warmth, yet she is filled with frustration and regret. Pacing around the stage, she ruminates how Shirley’s stubbornness should have warned her that she would leave, before softening as she remembers her own happy childhood in Trinidad. Memories unfurl and soon she is talking about her husband Rodney, who “liked a drink”, and we begin to guess why Shirley left. When Shirley enters the stage, occupying a space separate from Evangeline’s, her monologues elucidate how she was affected by her father’s behaviour, and how her parents’ sins are visited on her troubling relationship with her partner, Daniel.

Inniss does a tremendous job of utilising unseen characters, with rich and visceral dialogue that gifts the protagonists’ memories remarkable clarity. Characters’ hands and eyes are given particular focus. Shirley remarks on the disquieting safeness she felt at holding her father’s hand, when she’d “seen what it could do”, while Evangeline is brought to a moment of grandmotherly ecstasy when she holds Teresa’s children’s hands. Evangeline recalls that Shirley’s eyes were “black and defiant”, contrasting how Shirley speaks of her parents’ eyes succumbing to faraway looks that belied their marital troubles. 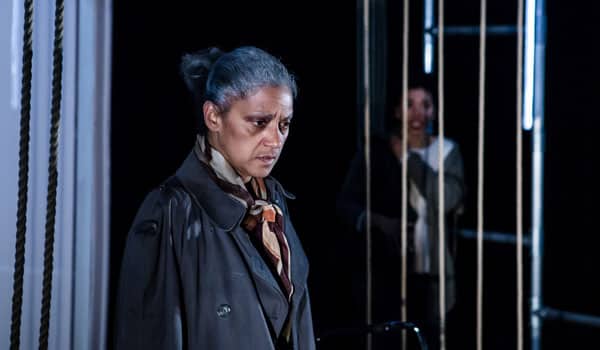 The parallels between Daniel and Rodney are slightly overstated, and the inevitable final act encounter between Shirley and Evangeline was a little drawn out, but the play is otherwise impressively constructed. At 90 minutes, Inniss widely avoids lingering on particular memories for too long. Instead, like Alan Bennett’s Talking Heads, the fluctuating emotional tenor of recalled encounters sends the narrative in extraordinary directions. In this respect, Kerri Mclean’s sound design is invaluable, with dispassionate announcements at London Bridge station contrasting the excited remembered movements of a Trinidadian forest. Peter Small’s lighting is, in turn, simple and effective, often serving to highlight the ever changing distance between Inniss’s characters. The final scene, in which the set is bathed with a heavenly glow, made a meaningful contribution to a pleasingly ambiguous ending.

Cathy Tyson delivers an affecting performance in the central role, bitter as the cud, but with a twinkle in her eye. There is great humour to her interpretation of Evangeline, and she often had the audience rocking with laughter – not least with the impeccably delivered sentiment that “My mother wouldn’t fart on cotton for [Rodney’s] mother to smell”. Tyson is also unafraid to let Evangeline’s flaws shine through, shedding light on Shirley’s feelings of betrayal through exhibitions of naivety and occasional self-absorption. Although Tyson’s delivery was sometimes a little uncertain, she is a commanding stage presence, and treats Evangeline with dignity even in her least sympathetic moments.

Chereen Buckley is a tremendously likeable Shirley, and it is heartbreaking to hear upbeat descriptions of life after leaving home deteriorate with a depressing inevitability. Many of the revelations about Rodney’s abuse come from her, and much of her dialogue is dedicated to exploring the fractured relationships she has with all the important people in her life, through no fault of her own. Consequently she is given far less room for emotional manoeuvre than Evangeline; the effect that domestic abuse has had on her is unrelentingly stark. Nevertheless, Buckley stands out for the subtle ways in which she explores Shirley’s emerging empathy towards her mother’s plight. The fact that Shirley’s treatment at Daniel’s hands brings her closer to Evangeline is treated as more than simply perverse; her world-weary demeanour is qualified by a growing sense that she must find some sort of peace with her past. As Evangeline notes, “It’s funny, no matter how far you walk, the memories never leave you”.

She Called Me Mother is a thoughtful play, beautifully written by Michelle Inniss and compellingly performed by Cathy Tyson and Chereen Buckley. The play’s exploration of memory, especially when examining the development and deterioration of relationships, makes for a highly visceral experience, with an ending that is open to a number of intriguing interpretations.

She Called Me Mother is touring around England until 21st November.