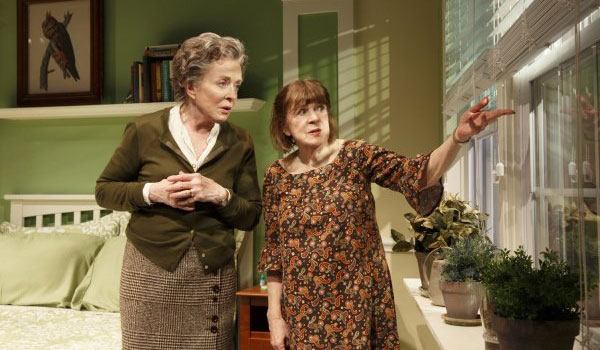 That, alas, is the modern way, in the disposable, replaceable 21st Century of instant gratification and unyielding demand for the next best thing – what or whoever it/he/she is.

Compromise, accord, giving way : these are signs of weakness for the modern warrior, male or female.

Such appears the underlying premise for David Lindsay-Abaire’s new play, Ripcord, now premiering at New York City Centre Stage 1 in a production directed with cool panache by David Hyde Pierce. It may be a bleak view of the present state of humanity, but it seems accurate and uncontroversial – because, certainly at the preview I attended, the audience happily accepted the play’s premise and laughed and smiled as the machinations played out.

The setting is a retirement home. One fairly large room is furnished with two double beds, a sitting chair, and a small table with its own chairs. A bathroom adjoins. There is a large window adjacent to one of the beds and, through the window, the grounds of the home can be gazed upon. In Alexander Dodge’s warm design, the room seems inviting and pleasing, no sense of institutional decay or neglect is present.

The room has two occupants, Abby Binder and Marilyn Dunne. Abby has been in the room for some time and, until very recently, has been the sole occupant. The administration of the home has changed and Abby’s privileged status has changed with it: she does not pay for a private room, so now she must share with Marilyn.

At first, Abby tries to resume control of her environment by freezing Marilyn out, ignoring her and seeking to prevail upon the staff to move her. A “fat woman” has just died and Abby wants Marilyn sent to the newly vacated bed on a different floor. But her wily manoeuvres fall on deaf ears; Marilyn remains ensconced. 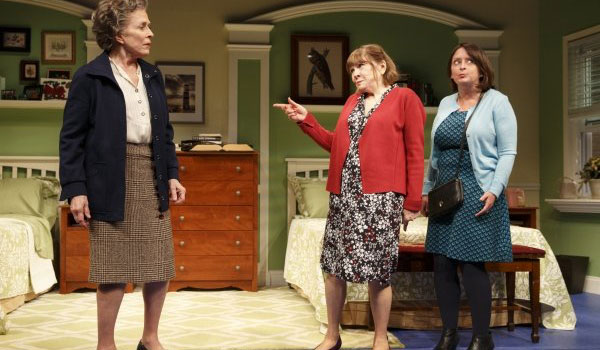 Abby and Marilyn could barely be more dissimilar: a septuagenarian, female Odd Couple of sorts. Abby is precise, pinched, perfectly coiffured, immaculately groomed, fussy and determined. Marilyn is flighty, frumpy, free-thinking, funny, frolicking, carefree but stubborn. Marilyn tries to make the most of life’s opportunities, to have fun and to try new things. Abby is a creature of routine, little humour, happy with her solitude, and unyielding.

Marilyn wants the accommodation arrangements to work. Abby wants Marilyn gone from her domain. They really only agree on one thing: Abby’s bed by the window is the best one in the room. Abby has it; Marilyn wants it.

A bet follows between these wily adversaries. If Marilyn can scare Abby, Marilyn gets the bed. If Abby can anger Marilyn, Marilyn moves rooms. Yes, that is the narrative propulsion here – a hideous, awful race between two old ladies to demean and belittle the other in order to get the best bed. There is no subtle twist, no revelatory examination of the cult of “me”, just a spiralling cascade of hideous unkind behaviour.

Yes, occasionally it is genuinely funny, often one smiles. But, all the while, the ghastly spectre of the awfulness is just there, rippling below the surface. Even when, as inevitably it would, the two admit how they have struggled with the game and deceived each other and make a kind of peace, still the game is not over. It never really will be. For friends can ignore friendship for personal gain.

So, while this is billed as a new comedy, and while it occasionally feels like an odd episode of The Golden Girls (without the charm), this play concerns big, ugly themes. In a way, it is an important play; in another, it is a reckless one. Because Abby and Marilyn are both changed by the experiences they endure, on one view of it for the better. It is as if the author thinks that this tussle, which involves crimes of varying degrees of magnitude, humiliation and despair, it worth it for the end result – a sort of idealistic happy families vignette.

But, it’s not. The game these two women play is appalling, but it is the sort of game modern society does not raise an eyebrow about. They are both dehumanised by what they do, and they engulf others in their deceitful exploits. Both women should go to jail – not be seen as funny old dames having a giggle. 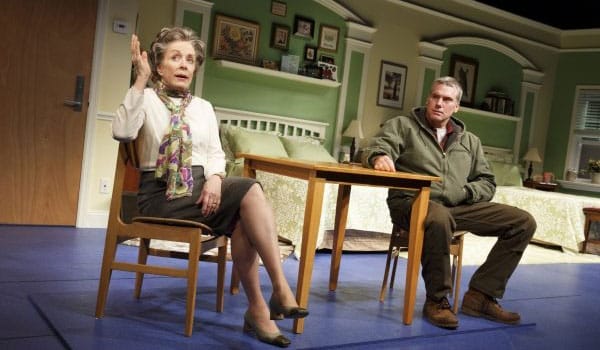 Holland Taylor is in exceptional form as the coiled, steely Abby. She manages to humanise a thoroughly inhuman creature, making her likeable despite Abby’s more loathsome attributes. This is a real testament to Taylor’s finely honed skills – she truly makes something out of nothing. In particular, in one key scene, late in the play, she is marvellously unsentimental when the text (and the audience the night I was there) seems to beg for maudlin excess.

She has that marvellous ability to make an obscenity sound freshly minted and to wring real comedy out of its use, and she does a simply terrific fall from a bed, the sheets and covers cocooning her. She can shoot a barbed look as well as Bette Davis ever could, and her comic timing is impeccable. Single-handedly, Taylor salvages the evening.

This is not to say that Marylouise Burke is not in excellent form as Marilyn – she is. But the part has the in-built charm of the underdog to help smooth over the cracks of unpleasantness. Burke’s Marilyn is instantly recognisable as a kooky grandmother, game for anything, seizing life. And Burke plays that card extremely well, making an excellent foil for the more steely and stern Abby.

But it is through Marilyn’s infectious engagement with the bet that the audience is seduced into thinking it is all just a bit of a laugh. And there’s the rub: it’s not just a laugh, what is happening between these women is awful, and Burke needs to find a way, as Taylor does, to ram that point home.

The rest of the cast do perfectly decent work, with Nate Miller particularly effective as the indignant moral voice, Scotty, albeit his seduction to the dark side is disappointing (the writing, not the playing) and Glenn Fitzgerald a carefully modulated prodigal son, wanting reconciliation, but not at any price.

Hyde Pierce ensures that the silliness factor is high throughout and this deflects from the real issues with the play. Often, it is not clear what is real and what is fantasy. One assumes Hyde Pierce intends to smooth over the vicious self-interest by these diversions and it seems to work on the basis of the reaction of the audience around me.

If you wonder why it’s called Ripcord, here’s a hint: there is a scene involving enforced skydiving. But I doubt that is the real reason. More likely, it is a reminder that we all need to parachute out of the hideous, selfish modern world.

This is a play full of pride and prejudice, and central characters who should know better than to behave as they do.