“Having [Kidman’s] name on the poster helps people come to see a play and hopefully when they get there they will be engaged with a subject that they might not have come to the theatre for. It helps enormously sometimes. Whether it’s something that needs to be the case all the time in the West End, I think it’s already proved it doesn’t. There are productions in the West End that don’t need huge stars. I think it’s a balance really…Our hope is…if [audiences] have such a good time that they might develop a long relationship with theatre. There is an onus of responsibility on us to make sure we deliver…or we won’t even be sitting here in a few years.”

That is Michael Grandage, interviewed by The Stage, justifying his decision to cast Nicole Kidman in the leading role in Anna Ziegler’s new play, Photograph 51, which I saw in previews at the Noël Coward Theatre. The season is almost sold out, despite the eye-watering ticket prices.

Clearly, people want to see Kidman in the flesh. Just as, in another part of town, people want to see Benedict Cumberbatch in the flesh. But that is where the similarities between these two occasions of star casting end. Ziegler’s play is not Hamlet and, absent a star like Kidman in the central role, clearly Grandage does not think audiences would want to see it. Cumberbatch is saddled with an overwrought, but visually arresting, production and a lousy set of supporting actors; Kidman has a first-rate supporting cast (not all of whom are utilised well) and a production which is pedestrian but not arresting. Cumberbatch makes a solid attempt at the key role; Kidman is a complete disaster.

This is the stark reality of Grandage’s theory: there is no point engaging in star casting unless the star can actually deliver the theatrical goods. When they can’t, everything suffers. People who see the production, witness the bad acting but think that it is acceptable, leap to their feet at the end of the performance to applaud it. They tweet about their pleasure. Really all they are celebrating is the presence of their star, not her achievements as a conduit for engaging, interesting or gripping acting. Remembering lines is not acting, but when people think it is, theatre and theatrical endeavour is devalued.

Kidman speaks in a peculiar monotone for much of the performance. There are passages in the text which should be luminous, lyrical moments of intense beauty, where Kidman’s character reveals a little of what drives her relentlessly forward. But they fall flat, rendered dreary and dull by Kidman’s inability to use her voice in ways which are revealing or characterful. 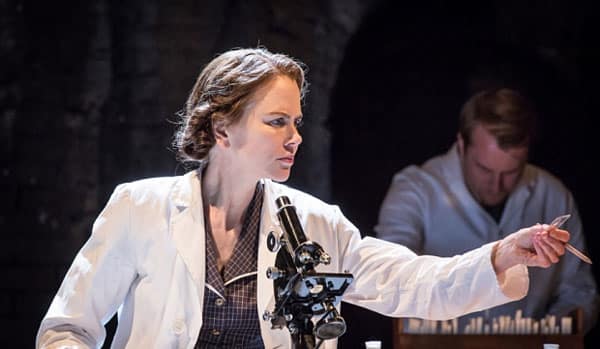 Her face seems incapable of movement: a solid block of expressionless beauty. In stark contrast to her neck, Kidman’s face can display nothing. Her mouth conveys all the expression of which Kidman is capable, running the full gamut from smile to pout, but at least moving; a pertly lipstick-covered wound from which banal squawking issues. Her hands and arms overcompensate for the lack of facial manoeuvring; they seem to be in a performance all of their own, flapping and flailing, curiously planted on a hip or clasped behind her head, awkwardly and oddly.

To give Kidman her due, she has undeniable presence on stage, but she is incapable of harnessing that presence into her performance or using it to make her scientist character mesmerising or scintillating. The standard she achieves overall is akin to that you might find in a successful high school production. There is no through-line to the character and the performance reeks of melodramatic stupidity. The scene where Kidman doubles over in pain is laughable; her “ferocious” attack on a fellow scientist, quite risible. She is like some gormless stick-insect, wholly unbelievable.

It is important to be clear about Kidman’s failures because the character she plays, Rosalind Franklin, at least in the version of history which Ziegler endorses in her script, is a towering figure in the unlocking of the DNA double helix, a woman betrayed, belittled, and beaten by a pack of self-serving, sanctimonious and utterly vile men. For the play to work, Kidman’s character needs to be inspirational, complicated, difficult, extraordinary; coming across as a mediocre functionary is simply not enough.

Kidman is utterly miscast and Grandage must take responsibility for that. Franklin died aged 37; Kidman is 48. The role, then, should be played by a younger, glorious actor. There is no reason an older actor could not play the role – Helen Mirren or Kristin Scott Thomas or Janet McTeer or many others could have easily pulled it off. But Kidman has been cast for her poster power, and that reflects badly on both the play and theatre in general.

Ziegler’s play is not revolutionary in form, but it’s subject matter is fascinating. Earlier this year, Tom Morton Smith’s Oppenheimer covered similar ground (absent the detailed issue of research misogyny) in a much better way which required no poster film star to achieve real success, critical and box office. Grandage’s production is not nearly as inventive as that Angus Jackson production; in many ways, it is bland when it needs to be exhilarating. Christopher Oram’s set perfectly evokes the notion of the subterranean cave where Franklin was forced to work by her male colleagues, and at the same time shows the classical edifice of King’s College which represents the grandness of academia. A chessboard floor lights up in different ways and provides a clear sense of the X-Ray world in which Franklin operates.

Much is left to the audience’s imagination. The DNA double helix, the central image of the play, is never revealed. Nor is the titular photograph 51, the one that triggers the phrase: “The instant I saw the photograph my mouth fell open and my pulse began to race”. It is hard to regard these choices as ideal; seeing the sequence of photographs Franklin takes, leading to and including the critical Photograph 51, and being able to watch the work of Watson and Crick evolve as they race to uncover the structure of DNA would help decipher the scientific jargon, make the drama more comprehensible. Especially given the absence of a compelling central turn, the production needs to work harder in terms of illuminating the scientific core. A disastrous moment with the sound of a human heart beating robs dramatic tension from the play’s climactic turning point.

Stephen Campbell Moore and Edward Bennett, Wilkins and Crick respectively, both excellent actors, seem in the wrong roles. They would have worked more seamlessly in each other’s parts. As it stands, they both overplay, probably aware of the limitations of their leading lady and wrongly seeking to compensate. Patrick Kennedy fares better as Franklin’s protege and would-be suitor, Don Caspar, but Will Attenborough is just too extreme as the wild-haired boy wonder, James Watson. (Watson, Crick and Wilkins are all awarded the Nobel Prize, but Franklin is not honoured posthumously.)

Really, Ziegler’s play should have a real frisson given the recent events with Sir Tim Hunt and the sexism row which saw him ejected from UCL. Her play shows the patriarchal and sexist environment of science and academia in splendid, raw detail – it is hideous to think about the ghastly way men treated this remarkable and inspiring scientific mind – just because she was a beautiful woman. Grandage’s production sidelines the ghastly truth; the misogyny should be under the microscope, not ignored in a fuzzy panoply of eccentricity and “old boy” camaraderie.

Ziegler evokes Peter Brooks’ production of The Winter’s Tale as a key revelatory point in the play. Franklin saw the production; Wilkins did not. Franklin waxes lyrical about John Gielgud’s performance but cannot remember the actor who played Hermione. She says “I suppose she simply didn’t stand out.” There is a metaphor for Franklin’s own perception of her life and work – she thinks she didn’t stand out. Of course, her perception is quite wrong. Franklin did stand out – Watson acknowledged that when the Nobel prize was awarded jointly to him, Crick and Watkins.

In fact, Diana Wynyard was Hermione in that seminal Peter Brook production. And, alas, here, in this Grandage helmed mediocrity, it is Kidman who doesn’t stand out.