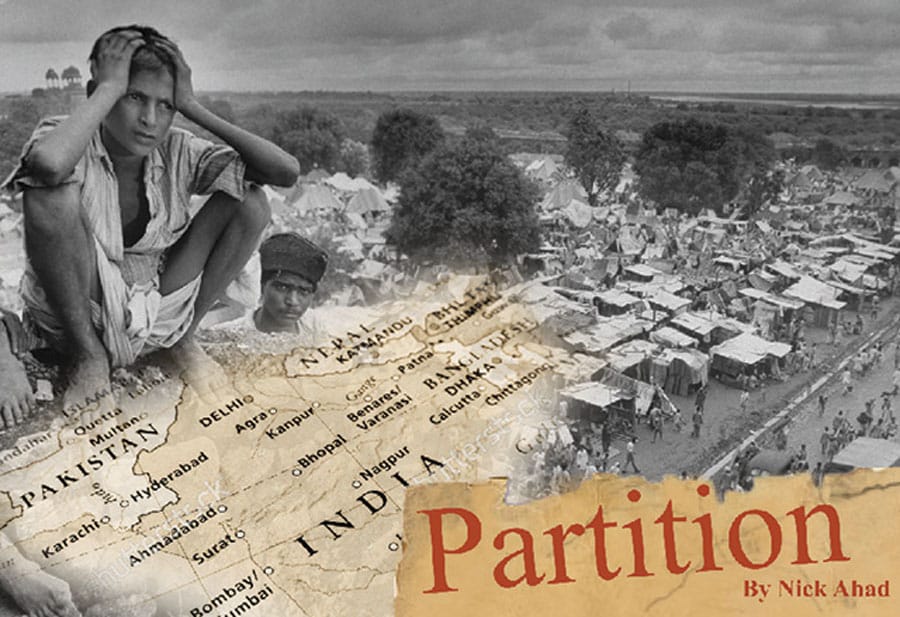 The evening of theatre that was ‘Partition’ at the West Yorkshire Playhouse merits five stars, not just for the script by Nick Ahad but also the concept by which his story was presented to us: an on -stage radio broadcast complete with multi – roled actors and live sound effects.

At the heart of this event was a strong compelling script, presenting us with the story of the upheaval and atrocities following the 1947 partition of British India into India and Pakistan and their legacy of bloodshed and trauma for Muslims, Sikhs and Hindus alike – a legacy which still haunts and stains those communities in this present day.

So stark was the story that I left the theatre wondering why I’d never heard of it before and why it wasn’t in these days of multi cultural Britain a part of the schools syllabus. It may sound a sombre and maybe even off – putting subject for theatre but Ahad brilliantly humanised this history into the story of present day two lovers, one Sikh, one Muslim and their marriage – very against the wishes of their respective families. The skill of the writing showed in the way sizeable chunks of history were presented to the audience, but by people who were both sympathetic and believable – the struggling mother cooking pakoras, the jaded official who’s seen it all, the grandfather reflecting on a past he can’t put behind him – with the result that these messages were assimilated effortlessly into the character driven drama.

But the play was only part of the triumph of the evening. The story was, as I said, staged as a live radio broadcast, with 4 actors slipping expertly between roles, vocal dexterity matched by physical realisation of the characters in such a way that there was never any doubt as to who was onstage at any one time. Balvinder Sopal morphed by a mere twist of the body from angry mother, to aggressive café proprietor to nervous registrar, so keen for her very first wedding to run problem free.

Even more impressive was Darren Kuppan who played not only the groom, but the groom’s brother in law and the groom’s octogenarian Grandfather, effortlessly nailing three distinct characters and ages with movement and voice.

So adept were the four actors that a climax where all their various characters were onstage together was never less than totally believable. Special mention too must be made of Charlotte the sound effects lady who created a whole variety of sounds effects from frying pakoras to walkie talkies with an unfailing cool precision; her use of rubber gloves to conjure up a flapping pigeon had me glancing instinctively up to the rafters of the theatre.

The piece overseen by Stefan Escreet who orchestrated the mix of sounds and acting, effectively adding odd non radio theatrical touches like spot lights and smoke (burning pakoras of course), creating an experience for the audience that was unusual and refreshing. This partnership between BBC Radio Leeds and West Yorkshire Playhouse is something that should definitely stop being unusual and become part and parcel of the increasingly diverse and lively West Yorkshire Playhouse output. The play itself is on the BBC iplayer and all I can say in conclusion is go listen to it.

LISTEN TO PARTITION ON BBC IPLAYER

Jonathan Hall is a playwright and teacher; his plays have been staged at the Edinburgh Fringe, The Chelsea Theatre and the Bush Theatre. He works with new writing and fringe theatre in the West Yorkshire area and is co-chair of Script Yorkshire, an organisation that supports and develops local writers.