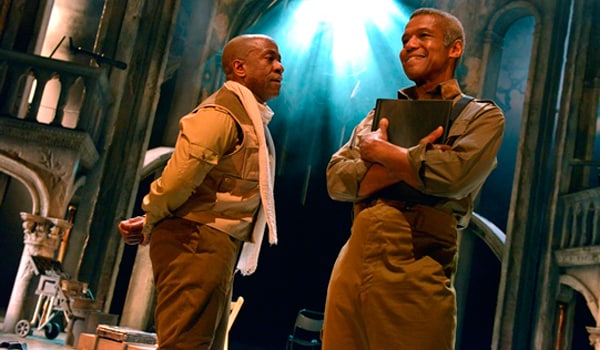 The only question properly to be asked in relation to casting, whatever race, gender, age, hair colour, accent or waistline an actor is or has, is simply: “is this actor the best person available to play this role?” If they are, cast them. If they are not, don’t cast them. There should not be roles which are out of bounds to particular categories of actors – let actors act.

Now playing at the Royal Shakespeare Theatre in Stratford Upon Avon is the RSC’s latest revival of Othello, directed by Iqbal Khan. It stars two black actors in leading roles: Hugh Quarshie as Othello and Lucian Msamati as Iago.

Quarshie’s casting bears some thought. In 1999, he published an essay about Othello which included this line:

“Of all the parts in the canon, perhaps Othello is the one which should most definitely not be played by a black actor.”

His views were more about racist conventions being reinforced by portrayals by black actors than about whether or not black actors only should play Othello. He went on:

“My feeling is that black actors should continue to play the role; the racist conventions have persisted for so long precisely because not enough of us have played the role and challenged the conventions. And I believe that a non-racist interpretation may be possible.”

He believed that Othello should be driven by “compelling psychological, social and political reasons:… (as) he behaves as he does because he is a black man responding to racism, not giving a pretext for it” and wanted to “produce a version of the play which shifts the focus away from race and onto character”.

It doesn’t seem that Khan and Quarshie were in agreement about how to play Othello, because the performance Quarshie gives in Khan’s Othello is not one propelled by psychological, social and political reasons, nor is there an focus on character: it is, however, by some margin, the dullest interpretation of Othello I have ever seen.

Othello is a marvellous character: a warrior, a leader, a political animal, a man, a lover. In order for the play to succeed, the audience needs to see in Othello what Desdemona sees, what the Duke sees, what Iago is jealous of, and what Cassio respects: Othello’s greatness should shine through his attitude, his bearing, his speech, his stature. It is only when you have an Othello with those qualities, a lustre that is profound, that you can have any kind of tragedy, that you can feel the contempt both Brabantio and Iago feel for Othello.

Quarshie is in tremendous physical shape and brings a certain taciturn gravitas to proceedings, but Othello is a man of action and passion, and there is almost no hint of that about Quarshie’s performance. His relationship with Joanna Vanderham’s curiously vapid Desdemona is awkward and strained; there is no sense of a real, great romance between the two of them. This Othello is too plain, too ordinary, to sustain and fuel the jealous rage which takes a life.

Scarcely better is Lucian Msamati’s Iago. Subtlety is not a keyword for this performance; this Iago is a raving lunatic, best summed up by the moment when he gets what he wants and then spends time slamming the lid of a chest, long and loud. He seems mentally unhinged, in an axe-murderer kind of way. The trouble with this is that, for the drama to work, Iago must appear trustworthy and loyal: Msamati wears his hatred and contempt on his sleeve; quite why anyone trusts him is incomprehensible. If Iago is merely an amoral psychopath who hates everyone, the bruising, almost suffocating, intensity of the drama Shakespeare wrote never takes hold.

Msamati swallows many words, so more than a quarter of what he says is lost. For a role which has the most lines and carries the bulk of the plot, this is a serious deficiency. To give him his due, Msamati mines a deal of humour from the text, which is refreshing, and his scenes with James Corrigan’s quisling Roderigo are quite fine.

Indeed, perhaps the fault lies not in the stars, but in the direction. Khan seems to take an impossible middle ground approach to the text, which rewards no one, cast or audience. 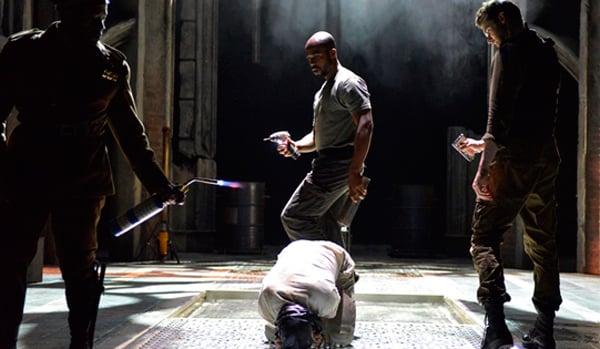 There is a clarity to the overall story-telling which is admirable, but the highpoints of the production, the key moments, get bogged down in a need to be “modern”. There is, for instance, an incomprehensible section which evokes waterboarding and torture associated with Guantanamo Bay – quite why anyone thought this was necessary, or desirable, is beyond me. It serves as nothing more than a jarring distraction from Shakespeare’s plot. That plot is as relevant and timely now as it was when it was first penned; it just needs proper playing. It doesn’t need to be “made relevant”. It is relevant. It certainly is not enhanced – in any way – by the odd spectacle of Desdemona casually sporting a power drill used in torture sessions.

But what this interpolated torture sequence does achieve is a diminution of Othello’s stature. Torture, especially extreme torture, is not a part of a hero’s arsenal. By adding this waterboarding scene, Khan suggests that Othello countenances this behaviour, or worse, practices it himself. How black does Khan see Othello’s soul?

Khan does not come to grips with the emotional resonances of the play. Motivations are not clear; what drives dissent is unknown; loyalties, passions and fears lie largely unexplored. Racism is definitely at play, as well as the true sense that Othello is an outsider. But if there is some special frisson to be gained from having black actors play both Othello and Iago, it is not evident in this production. Most egregiously, it is never clear exactly why Iago does what he does.

The best work comes from Jacob Fortune-Lloyd’s classical “soldier fit to stand by Caesar” Cassio and Ayesha Dharker’s wary Emilia. Fortune-Lloyd gives the text real attention and this pays dividends: his “My reputation” speech was the first moment of true passion in the play, his fusion of character and speech expertly judged. His good looks and soldier physique made him the perfect poster boy type, but his intelligence shone strongly. Dharker’s beauty and silent watchfulness made her wife to Iago a natural creature of the shadows. Quite where her loyalties lay was never certain – a good thing, because Emilia has a mercurial quality which is essential for the machinations of the plot. Each made the most of ever second of stage time and often conveyed a lot while silent: Cassio’s discomfort with public displays of affection; Emilia’s disapproval unarticulated but clear from her glinting eyes. Clever adornments to skilled performances. 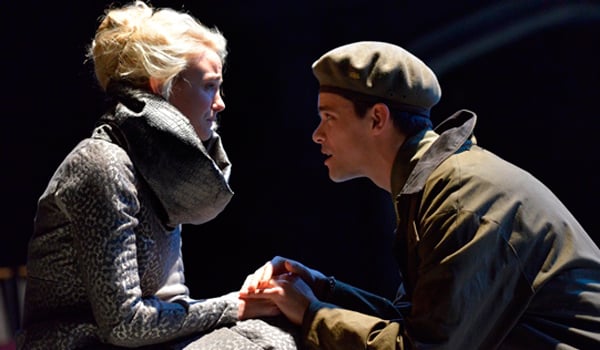 Nadia Albina is very effective as the Duke of Venice and James Corrigan makes something out of very little as Roderigo, the first to be duped and used by Iago. These roles can, and often are, easily thrown away but both Albina and Corrigan left memorable impressions. So did Brian Prothero, but his was of the undesirable kind: his Brabantio was entirely lifeless, vocally dull, and almost comic in his atrocious portrayal. (He got great costumes though)

Costumes (Fotini Dimou) seemed the defining characteristic for Joanna Vanderham who seemed to take her cue for her portrayal of Desdemona from Prothero’s portrayal of her father. Decked out, and with stilted movements, like some sort of bizarre fashion model, a creature one might see lurking in the background in Games of Thrones (my companion wryly observed this), everything about this Desdemona rang false. Scant attention was given to her by Khan’s direction, but even so, it was often difficult to distinguish her from Scarlett Brookes’ whiny Bianca. On any view of it, Desdemona needs a radiance, an intangible attractiveness, which makes the machinations which whirl around her, and engulf her, understandable. Here, alas, the question was who would strangle her first.

There is good work in the ensemble, particularly from Jay Saighal, Owen Findlay, David Ajao and Rina Mahoney.

Ciaran Bagnall’s set is quite delicious. It evokes a sense of faded grandeur easily and there is a careful attention to detail which ensures a comfortable conception of the canals of Venice, the halls of power there, as well as the battleground at Cyprus, and the interior bedchamber of Othello’s quarters. Bagnall uses moving platforms with ease and style: the opening tableau, changing from tiled floor to watery passage, is especially good. The archway which sets the mood for the opening scene is cracked down the centre, a clever reflection of the world of Othello. In every way, the set was beautiful to look at.

Also in charge of the lighting design, Bagnall ensures that shadows and darkness flicker across the settings or shroud particular events – the mood in the lighting often gives a clue about tension and importance unclear from the performances.

This is a curious production of Othello. You get the bones of the story, clearly, but the flesh, the marrow, the heart – all of which depends upon the rich characters of the central trio and the way the actors approach their motivations, fears and tempestuous feelings – is thin on the ground. As Othello says: “Certain men should be what they seem”. In appearance, word and action. In Khan’s hands, and with this casting, none of Othello, Desdemona nor Iago are what they seem according to Shakespeare’s text.

Appearance is not the key to Othello. Great acting is.