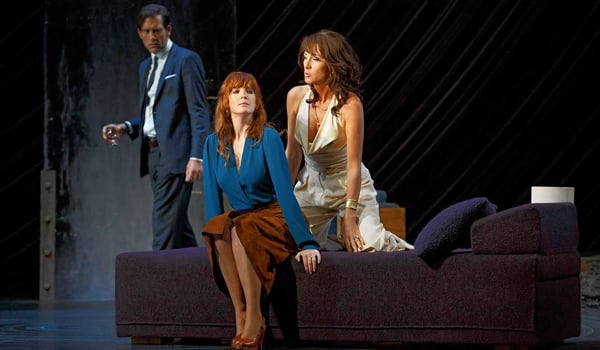 There is an apocryphal tale concerning Harold Pinter, his play “Old Times” and the great actor Anthony Hopkins who was starring in a revival of the play for Roundabout Theatre in 1984. Hopkins, the story goes, asked the great man what the play’s ending meant. “I don’t know. Just do it” was the querulous reply.

When at drama school, I was under the tutelage of an idiosyncratic dramaturg who considered the best way for a modern class to relate to Chekhov’s The Cherry Orchard was for her to read the text aloud while the class lay on the floor of the studio imagining what it was like to be a cherry tree about to be felled. This same tutor had very firm views about Old Times.

She eschewed the “theories”. She did not, for one moment, believe that the play was a fantastical imagining drawn from the mind of Kate, the wife in the play. That interpretation seems to involve Kate being psychotic, and killing both her friend Anna, possibly because she stole underwear but more likely because she was trying to steal her man, Deeley, now her husband. It goes on to suggest that Kate also kills Deeley because he was inconsolable about Anna’s death. Kate is mad, drinking and smoking, and fantasising – and that is the play.

Nor did she believe the interpretations that saw Anna and Kate as two sides of the one personality: either the way Deeley saw his woman, depending upon her moods, or as an actual case of multiple personality, with Kate perhaps pushing Anna to the background for many years only to have her suddenly return, to upset the balance.

No, my tutor was firmly in the camp that this was a play about memory, and how the memory can amend the past, create it afresh, and seal it in stone. That different people can have the same memories of the same events but their memories never align. To her, this was a play where everything and nothing was both true and false: it was just a question of perspective. Characters and events might or might be real; it was all a question of perspective.

No doubt Pinter would have been derisive about her views on The Cherry Orchard, but going by his comments to Hopkins, if true as reported, perhaps he might have agreed on the question of Old Times. 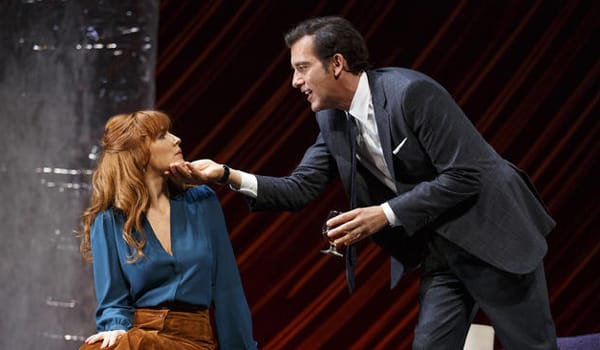 Now playing, again for Roundabout, but this time at the American Airlines Theatre, is Douglas Hodges’ revival of Old Times, kicking off Roundabout’s celebratory 50th season. In the programme, Todd Haimes, Artistic Director of Roundabout, opines:

“Douglas (Hodge) has likened the open-endedness of Old Times to that of a poem or dance piece. The play defies easy analysis or categorisation, but the evocative nature of its language and the sensual force of its relationships – embodied here by a powerful trio of actors: Clive Owen, Eve Best and Kelly Reilly – are magnetic. I suspect every audience member will come away from the play with a different grasp of the story that has unfolded on stage, and I love that a multitude of interpretations will be coming to life in the dark of our theatre.”

The only sure way to kill a production of Old Times is to try to do other than “Just do it!” Hodge, who has an intricate and long-standing affinity with Pinter, does not make that mistake. No auteur re-imagining here; no attempt to force a particular view onto the text.

Indeed, the closest Hodge comes to impressing a vision upon Pinter’s word waltz of pain and impression, lies in the setting. Christine Jones provides a startling set, difficult to describe. A huge thick block of ice serves as a door. The backdrop is full length and tall, dusty pink or salmon or some Seventies/Eighties cusp colour. It’s a flat surface, but there is a ridge or line circling ever inwards, creating a tunnel or vortex effect. Black modular couches are artfully arranged, with a centre central armchair for the man.

It’s minimalist but somehow excessive at once. Fond decadence seems the ambience and when the smoking and drinking starts, the sense of languid indulgence increases. The ice door seems odd or obvious, depending on your inclinations. Perhaps it is a simple symbol of the need for these characters to thaw, to warm up, or a suggestion of why they cannot. Or, more controversially, maybe the ice door is meant to represent an ice cube, floating on the surface of a cocktail, with the backdrop as the martini glass and the actors as the ingredients, separate, mixed, cloying or astringent. After all, martinis could affect memory.

Whatever, the set is terrific. It framed the action but did not impose upon it. Likewise,
Thom Yorke’s odd, compelling and disquieting score adds to the not-quite-right feel of proceedings. It starts its work well before the actors speak a word or make a move, and so establishes a feeling of discordance which never abates. Japhy Wiedeman uses lighting that is eerily reflective, shimmering and intangible, as memories are. It is incredibly effective. Constance Hoffman’s costumes accentuate the ineffable aspects of the characters, while underlying their sexual appetites and whimsical character traits.

Where Hodge does elect for difference is in the manner of playing. No low-key, slow boil, quiet broiling here. No, the parts are played with vigour, brasher than you would expect to see on an English stage or one that thought Pinter was wrapped in mothballs. The result is the sexy edge is more angular, the stakes are higher, the comedy quite a bit funnier. All deliberately so. It reaps rewards often, but perhaps best of all in the sequences where the theft of underwear is discussed, or the body in the bed is remembered, or the show tunes are so badly serviced. This is brave on Hodge’s part looked at one way; looked at another, it is simply just doing it. 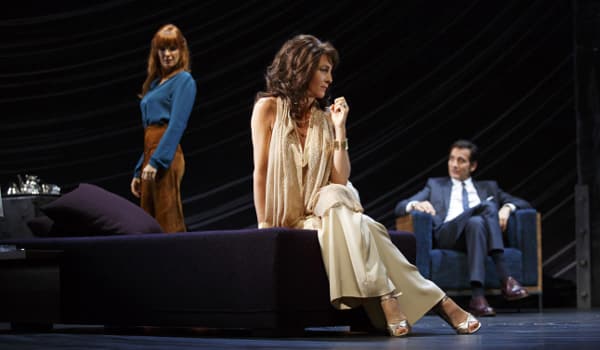 There is nothing to complain about in the casting. Eve Best, sultry, magnetic, prowling, is sheer delight as the enigmatic Anna. She enjoys the language immensely, is unafraid of the power that silence can generate, and exudes heat and coolness in equal quantities. She looks terrific, sounds terrific and is, in fact, terrific. Mesmerising to watch.

Kelly Reilly fills all the feminine spaces Best chooses not to occupy, and is especially good in the knowing, vacant look, the chilling turn of phrase, and the silent, penetrating glare. She takes the coquettish and pouting path more often than not, but lines it with fragrant buds; she seems familiar, but is constantly surprising and colourful. After her bath, her seductive night dress adds a sensual layer to her proclivities. She seems constantly like a would-be-fire about to reach the point when flames will shoot up high. Fizzy but classy.

Completing the curious trio is Clive Owen, suited, booted and bursting with masculinity. Quite nicely, he pitches his character, Deeley, at just south of actually charismatic and compelling; Owen, rightly, keeps Deeley’s flaws within vision. He prowls, snarls and gives a fine line in cocky indifference, his eyes are steely, his frame wired and ready. He balances nicely with both Best and Reilly, his eyes flashing chance and recollection, and you truly believe he has been intimate with both, lost with either and trapped by each. Complex and fruity.