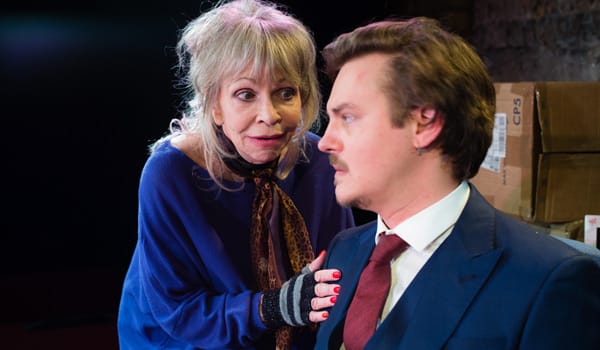 You have to hand it to the King’s Head Theatre. It programmes an astonishing smorgasbord of new work and revivals, it pays its performers, and it is constantly adventurous and edge-pushing. The performing space has had a makeover since last I was last at the venue and, as a result, rather than a makeshift proscenium space, the venue offers a sort of traverse/thrust/in the round auditorium which immediately indicates serious theatre. As you step in, you can instantly feel that the King’s Head has stepped up.

Given the volume of productions that grace the King’s Head Theatre, it is inevitable that some will not be much chop. But, usually at any rate, even where the production may not be terrific, either the play or performers can have a moment in the sun they would be otherwise denied. Audiences are immeasurably richer for experiencing theatre at the fringes, where money is not available to spend on sets, props or celebrities to distract from inherent awfulness. So too are actors, directors, designers, writers and everyone who makes a living as a theatre worker.

Without Fringe Theatre like that on offer at the King’s Head Theatre, big subsidised houses and big commercial theatrical ventures would suffer incalculably. There is more than a good argument that the Arts Council should be generous to the King’s Head Theatre – a grant of £50,000 a year would permit it a little freedom, a little less stress. And what might this Little Theatre That Could do with that?

Not, I suspect, Nobody’s Business, a new comedy by Sylvia Freedman which is now playing its premiere season there. It’s a curious piece of writing, ostensibly a satirical farce, one suspects, of the culture of “Europe”, and of the grants that are there on offer and the shady processes and underhand tricks used to secure and spend such grants. 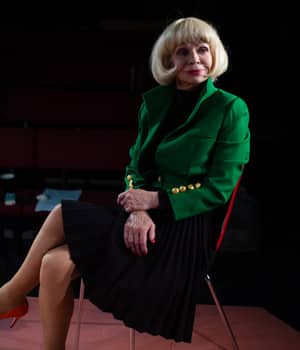 It takes the central conceit of The Producers (make money by funding a deliberate flop) and seeks to apply it to the odd world of new inventions and seed funding, adding a dog who serves as a director of a company, a potty inventor seeking to make a self-folding and motorised shopping trolley bag, a woman with low self-esteem but an artistic eye, who doesn’t mind hopping around in a kangaroo outfit, a wailing unpaid landlord, and a curious collection of swarthy foreigners who waltz in and out of the action. There’s an endlessly flickering light, a cacophony of boxes, a take-away curry with a mind of its own, bizarre dance breaks during scene changes, and some sound effects that would have been at home in The Three Stooges.

If all of this sounds like “It could be fun”, quite right. But alas, it is not. Laughter is not at a premium; generally speaking, the piece is as funny as enforced castration.

There is something which keeps the mind focussed, the interest engaged, and hope constantly engaged. That is the production’s secret weapon: Katy Manning.

Despite the drivel she has to speak, Manning invests every phrase with interest and energy, and she transforms her character Sybil, the hereditary concierge of the building where events play out, into something fizzing with hungry life, flowery passion and cutting observation. Without ever overdoing anything, Manning gives more life to the character and the piece than seems humanly possible. She even manages to make the bizarre “shake your booty” scene change activities seem natural. Quite the achievement.

Part Felicity Kendall, part Carol Channing, with just a soupçon of Jo Grant (The Doctor Who companion she first played about forty five years ago) and legs that most 30 year olds would kill for, Manning is a revelation. Watching her in this fatuous nonsense makes you pine to see her Judith Bliss, Miss Prism or Mistress Quickly: the potential that Manning has available to be mined is vast. There is something both astoundingly individual and comfortingly familiar about her: she soothes, inspires and captivates.

This is all the more remarkable because Freedman’s play is ludicrous twaddle. The dialogue creaks even more than the wafer-thin plot. Characters are one dimensional and dull, and if you cannot see how the play will end after the first ten minutes, you have no functioning intelligence. What surprises there are come from the unexpected and progressively more bizarre cameos from Michael Nowak (his moment of passion with Manning in the second Act is the comic highpoint of the evening) and Manning, whose husky voice can purr life into even the dullest phrase.

Director John Adams seems to have had a competence bypass given the directorial choices on display here. He has no idea how to utilise the newly configured space, and that bewilderment infects every aspect of the direction. He forces Manning to repeat befuddled “find the door” acting which she manages with an aplomb that is wholly undeserved.

Freedman’s play is actually funnier than Adams’ production suggests, mainly because he only really has two actors adopting the correct style: Manning and Tristan Beint, who plays the oily bureaucratic vampire, Hugo. Beint matches Manning’s energy and his sense of the farceur is sound. He does not have Manning’s agility, lightness of touch, or ferocious whimsicality, but in his ghastly three piece suit, he comes a close second. And he knows how to use his richly toned voice to engage. Like Manning, Beint makes something out of next to nothing. 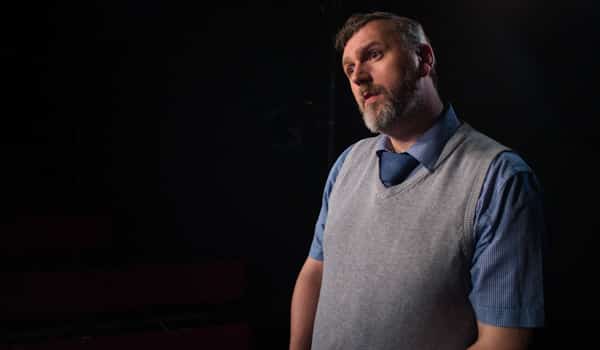 Adams does not seem to understand the comedy that lurks between the lines of Freedman’s play. Beint’s character should, like Myra from Hay Fever, use sex as a kind of shrimping net in order to get his way; Beint obviously could do that, but Adams does not unleash his inner lothario.

Every other cast member seems in a different play, Adams being unable to decide upon a common style or a cohesive attack.

Stephen Oswald and Claire Jeater seem to be in some soap comedy for melancholic bores (Oswald really has to stop shouting and Jeater has to stop channeling Eyore) while Jeremy Drakes has the market in mad and nerdy scientists down pat, but without every troubling to make any of them coherent characters. Comedy, especially farce, depends upon honest playing in absurd situations, not absurd playing in any situation. Each of the supporting characters needs focus, peculiarities and an essence of eccentricity – gross overacting and painful diffidence (incredibly, sometimes simultaneously) does not assist.

There is some excellent costuming from Jamie Simmons and although the set was a trifle unwieldy, it too served its purpose well enough. Boxes tumbling on audience members is always a delight. Sherry Coenon lights the action well, and the sense of dubious exoticism created by the lighting effects is rather ingenious.

This is a poor production of a poor play, but, nevertheless, Manning, chiefly, and also Beint make it worth seeing.

Really, the King’s Head Theatre should always be on the “must see” lists of anyone interested in theatre. Like the Union Theatre and the Landor Theatre, it’s where the theatre crafts-persons of tomorrow are cutting their teeth. Without these venues, the theatre is doomed.