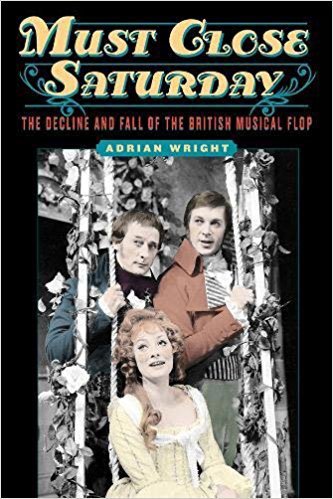 Must Close Saturday
The Decline and Fall of the British Musical Flop
by Adrian Wright
Boydell Press
4 Stars
ISBN: 9781783272358
Order a copy from Amazon.co.uk

If like me you have musical theatre running through your blood, Adrian Wright’s hefty new tome makes for an interesting read. It’s certainly kept me entertained over the festive period.

Like Ken Mandelbaum’s Not Since Carrie... which chronicled Broadway musical flops, Wright chronicles British flops from 1960’s The Lily White Boys to 2016’s The Go Between.

Whether you agree with Wright’s definition of a flop or not, seeing this weighty collection of British musicals collected together makes you realise that there is probably no subject that is off-limits for musicalisation. The Holocaust, French painters, the Rector Of Stifley, Edward and Mrs Simpson, Marilyn Monroe, Lewis Carroll, Jack the Ripper, the Virgin Mary, sexual problems, the electric chair, the wives of Henry VIII and variations on murder are just a few of the subjects selected by British writing teams.

Having a personal connection with The Hunting Of The Snark, I found that section of Wright’s book particularly interesting. It’s also interesting to note that even big stars can’t avert flops – Petula Clarke, Barbara Windsor, Cleo Laine, Michael Crawford and Ron Moody can attest to that.

If you are a musical theatre nerd Must Close Saturday is a must for your collection.

BUY A COPY OF MUST CLOSE SATURDAY FROM AMAZON.CO.UK