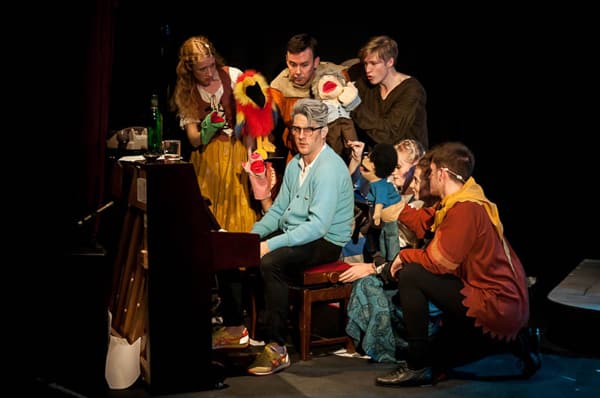 This is the funniest show of its kind since ‘Forbidden Broadway’. More than just a brilliant cabaret, however, this is a show with a through-story: a writer, Rudy Brown (the subtly played Robbie Smith) wants to win the ‘Musical of the Year’ Tony with his version of ‘The Hunchback of Notre Dame’. His strategy? Each decade, he revamps the material ‘inspired by’ the latest successful trends. As the story in the musical progresses, so do we move forward in time – stylistically – and compass the many of the major sensations from the mid-1950’s to the present. And each moment, of course, is an ingeniously constructed pastiche, mostly parodies, but some more touchingly sincere and affectionate. His wife, Lizzie (Rebecca Gillimand), doesn’t suffer this for long, and the history of their estrangement, separation and lives thereafter form the ‘real world’ narrative of the musical. Meanwhile, occupying most of the stage is the world of the Hunchback and assorted other characters, who tell their story as they lurch from one fashion to another, heedless of anything but the ever elusive smell of success.

Elokay Productions is the organisation set up by our real-real-world writer, Stephen Lanigan-O’Keefe, to bring this whole thing to the stage. Of Australian origin but long since resident in this country, he is conceiver, producer, co-book author (with efficient director Owain Rose), creator of the music and lyrics and music director of this, the first full production of his extraordinary confection. It appeared in concert performance last year at a decommissioned church in Highgate (and some of that cast survive to reprise their roles in this presentation), it has been changed and is now poised at a moment of being ready for adoption by bigger creative and production resources. 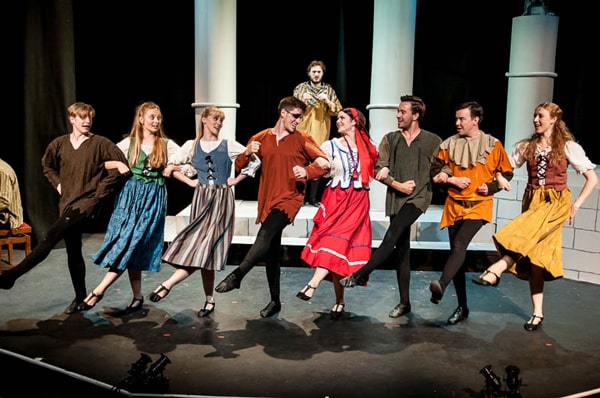 Lanigan-O’Keefe’s key strength is his score, which is a total delight, in his often perfectly captured spoofs of the great celebrated glories of musical theatredom. After hearing his take on Rose’s Turn, it will be lodged in your mind forever as one of the most memorable reactions to that milestone moment. Visually, Owain Rose scores as many hits with expertly staged parodies of notorious MT stage events: the beginning of the Cabaret-derived Trial scene, and its devastatingly apt Bob Fosse-esque choreography from the usually superbly detailed Emma Pleass, as well as the exact lighting design (not credited, but someone will tell me soon enough), creates an immediately comic impact that simply floors the audience. This happens over and over again, especially in the first half of about 75 minutes.

The second, shorter half pulls more and more surprising rabbits out of their collective hats, and then – wonderfully – when, with all their humour, they’ve made us like these characters so heartily, they turn all sincere in an exquisite Avenue Q send-up that is as genuinely warmed by honest pathos as it is by delighted chuckles. What is there not to like here? The creators, mainly Lanigan-O’Keefe, say they are ready to take this show the next step up, and if it is not within a year the worthy – home(ish) grown – successor to ‘Forbidden Broadway’, then somebody else will need the re-write. 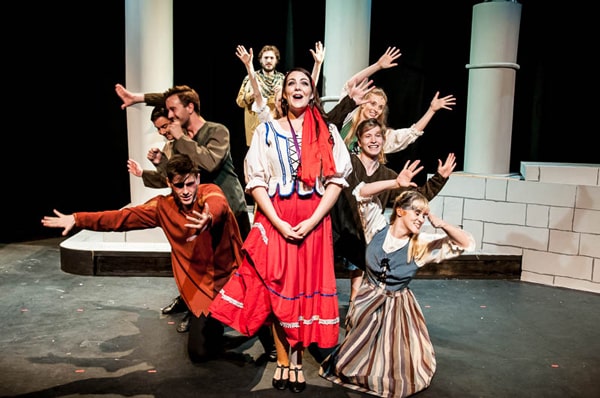 In addition to those mentioned, the generous ensemble comprises many very talented new faces, as well as some seasoned experts in the field. Esmeralda is the always-trying-to-play-it-straight Jennifer Tilley; her amour, Quasimodo, is the gloriously voiced dramatic tenor of Jamie Fillery (just you wait for his Sweeney Todd parody); the elder statesman here, Dom Claude, is the sensationally adaptable Kevin Rodgers, loving every grotesque leer and grimace, but with a stunning voice to boot; Sister Gudule is the splendidly witty Victoria Waddington; the poet Gringoire is Simon Hodson; the MC, amongst other wonderful creations, comes from trouper Andrew Truluck; the soubrette, Fleur-de-Lys, is Jessica Hern; lover-boy Phoebus is Colin Kiyani; with the ensemble completed by Chiara Brooke, Miranda Colmans, Mark Houston and Dominic Ramdsden. All the foregoing play other parts, many of them play dozens, and several of the cast are making their professional debuts with this jolly romp through the noble art of jazz hands and whisper-miked ariosos.

The lovely show comfortably fills up the stage of the LOST, with a small off-stage ban: Andy Ralls as AMD has come up with spot-on orchestrations, frighteningly close to the originals, but usually daft enough to keep the mirth flowing; the sound by Charles Parry is well balanced and set at a comfortable volume (although the LOST has perfect acoustics: astonishingly, unamplified audibility on the front row is identical to what it is at the rear of the steeply rising auditorium). Frank Turnbull designs the show with some wit (look out for the gargoyle masks of comedy and tragedy… both present in this show); and no fewer than four people are responsible for the many, many, many costumes: Frances Musker; Teresa Poland; Lorna Trinnaman; and Diana Darrer.

See it while you can; smile; laugh; and love.

BOOK TICKETS TO MUSICAL OF THE YEAR AT LOST THEATRE