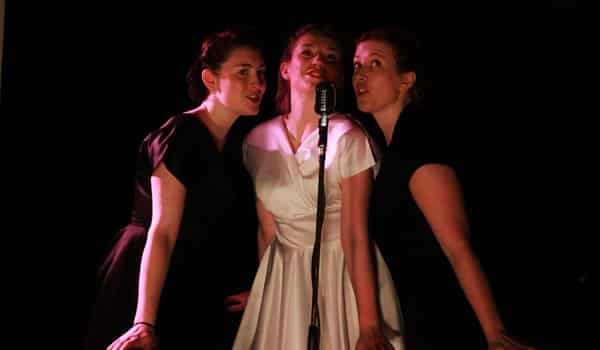 Earl Haig Hall is a remnant of a forgotten era—it’s the basement of your 1930s built church or community centre, if it sold good ol’ fashioned pub food. But it is also the perfect venue for Pants On Fire’s wonderful site specific adaptation of Ovid’s Metamorphoses.

Director Peter Bramley’s fresh vision shines through this seemingly simple take on an ancient text. We’re placed in the thick of World War II, what could be considered the defining moment of change for Europe in the early 20th century (Change? Metamorphoses? Get it?), and on its face, the piece looks exceptionally cheap—but that seems kind of deliberate. One really thinks this could be a fringe show just like many other, but the true magic of the work appears as the stage magic evolves. Puppets, projections, imaginative costumes, thoroughly conceived movement work, and a small ensemble that tackles 4-6 parts each, plus original music and lyrics by Lucy Egger, show themselves as masterful guides through ancient myths and origin stories that many consider impenetrable.

It’s often said that necessity is the mother of invention, and this company proves that maxim, with every second of this piece. As we venture towards the more well-known vignettes, Icarus, the boy who flew too high in the sky, the hideous Gorgon Medusa who becomes the beautiful Pegasus, and the Minotaur and its Tributes, one can’t help but be excited by what new piece of stage magic will aid them in their retellings of these stories. Pants on Fire are masters of invention, that is for sure.

Although this is a new cast, and some of the movement seemed less than polished—no, the jazz hands are not perfected, and the speakers lack the upper end of the spectrum so the amplification sounds slightly amateur, but who cares, really—this company’s sheer ability to delight, move, oh, and play several live instruments and sing in tight harmonies, is ridiculously impressive.

Metamorphoses plays through the rest of October, every Thursday to Sunday, and though Earl Haig Hall is in deepest darkest Crouch End, do not let the journey phase you. Take every train, tube, and bus necessary to go see this production. It is a must see.

Metamorphoses plays at the Earl Haig Hall until 30 October 2015