It’s always good to see this funny, clever show, Lynn Ahrens (book and lyrics) and Stephen Flaherty’s (music) first success: a delicious, silly farce, with musical numbers punctuating the action.  It’s a simple tale, neatly told, and gives ample scope for a baker’s dozen of featured roles, making it a staple of drama schools and colleges.  Much of that same youthful, energetic and ebullient atmosphere carries over into Paul Callen’s debut production, in which he symbiotically fuses his talents and vision with the sizzling choreography of industry hot property, Jamie Neale, and fills the stage with mainly young performers, clearly delighting in continuing the vivacity and showmanship learned in class.  In best ‘Union‘ tradition, the dance numbers are the star of the show here, and Neale sets the tone from the off, with a bracing opener, sharp as a razor and utterly beguiling: and he keeps the steps and moves coming with superb economy and aptness – just wait for the killer kick-line later in the show!  It is a peach.  That mood of frenetic activity – so characteristic of farce – is here aplenty, but much else is different in this interpretation of the form. 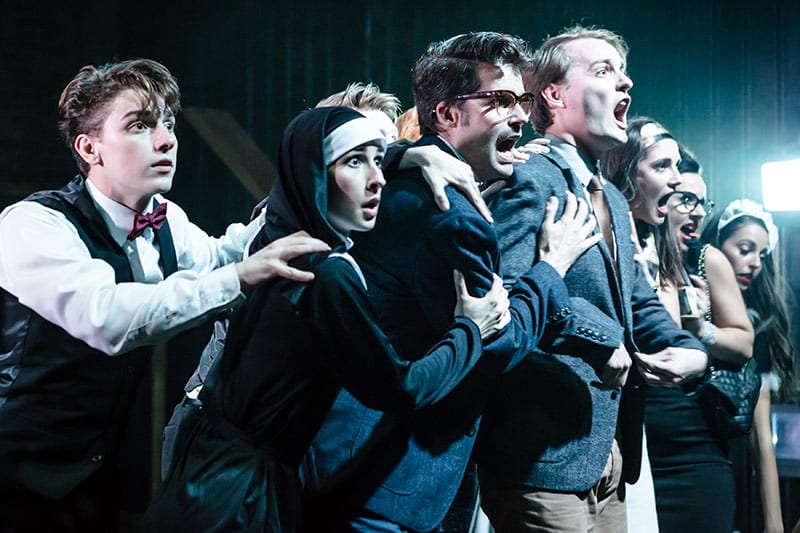 I last saw this show in a conventional box-set staging, which laid great emphasis on the ‘realistic’ elements of the entertainment: there was a lot of split-second opening and closing of many doors, with all the complications and increasingly bizarre juxtapositions created by that ‘now-you-see-it-now-you-don’t’ approach.  Farce relies upon that interplay between what the we, and the characters on-stage, know and what we, and they, can see.  Reuben Speed’s design simply dispenses with all that and gives us a transparent space, an all but empty vista, admonished with but seven skeletal door-frames, and decorated with a few picture frame brackets.  This utterly transforms the nature of the play we experience.  No longer is – abundant – humour generated by the comical heady propulsion of a runaway plot, but instead we find ourselves really listening carefully to what is said and paying attention, even taking seriously, the situations presented to us.  Glamorising the emptiness, pools and shafts of wonderful light from Sam Waddington give character and mood to the otherwise deserted terrain.  And, in a corner, Richard Baker’s nifty rhythm section (with Richard Burden, bass; Alex Bramwell, drums), keep the score ticking along, like some crazy cocktail combo in a demented Riviera hotel. 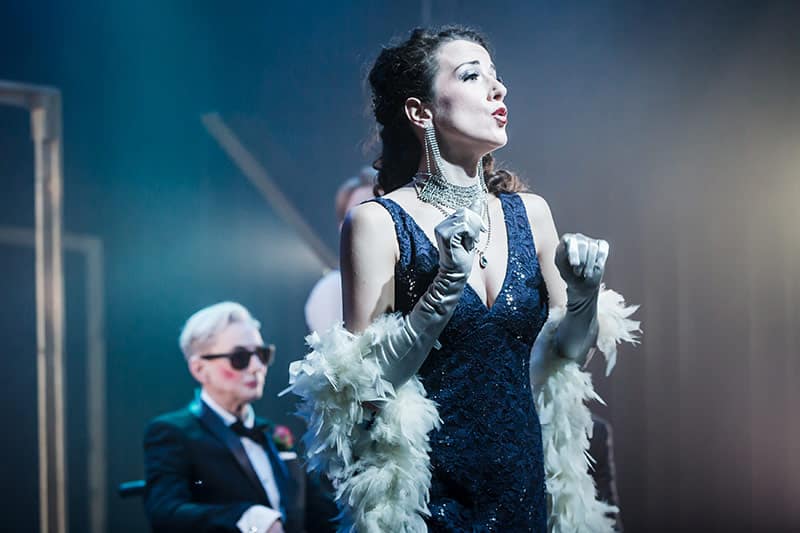 We are in the South of France, you see (at least for most of the show).  Lured away from his dull job as a shoe salesman, Tom Elliot Reade’s Harry Witherspoon sets off on a Graham Greene-like adventure in pursuit of a mysterious legacy.  Finding himself mixing with forces beyond his ken or compass, he takes up with Natasha Hoeberigs’ lovely Annabel Glick, a competitor – naturally – for the very same legacy funds.  Meanwhile, sassy villainess Natalie Moore-Williams’ Rita La Porter, is hot on their trail, trigger happy as ever, and willing to stop at nothing to get what the other two also seek, limply aided by Tom Keeling’s gawky Vincent Di Ruzzio.  Meanwhile, Jonathan Leinmuller’s Luigi Gaudi is also in pursuit of this treasure-trove, and it takes us some time to figure out why.  The strangest codicil of the will, however, is that Harry must go on a holiday to France and take along the corpse of his benefactor, Ian McCurrach’s Tony Hendon, who gets pushed here and there in a wheelchair, made up to look just about still alive. 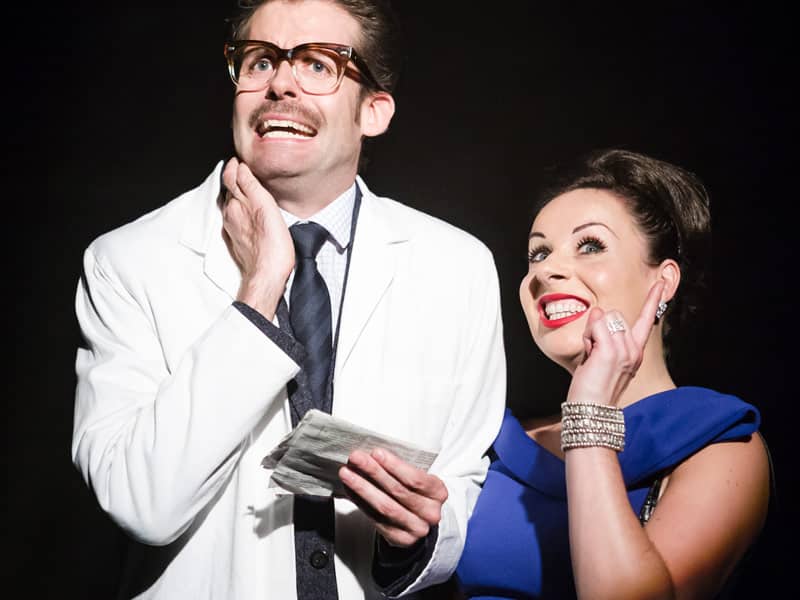 Around these central characters rotates an ever-changing ensemble of Lydia Marcazzo’s nightclub chanteuse Dominique du Monaco, Elizabeth Bright’s lanky Maid, Beth Clarence’s well drawn multiple roles, Tom Mann’s Solicitor, Blake Patrick Anderson’s Waiter, and Daniel Urich’s Bellboy.  Wonderfully, the score gives one of the most memorable vocal moments to Urich who doubles as the Emcee at Du Monaco’s nightclub, and his voice is really one of the grandest pleasures in the evening – watch out for this one. 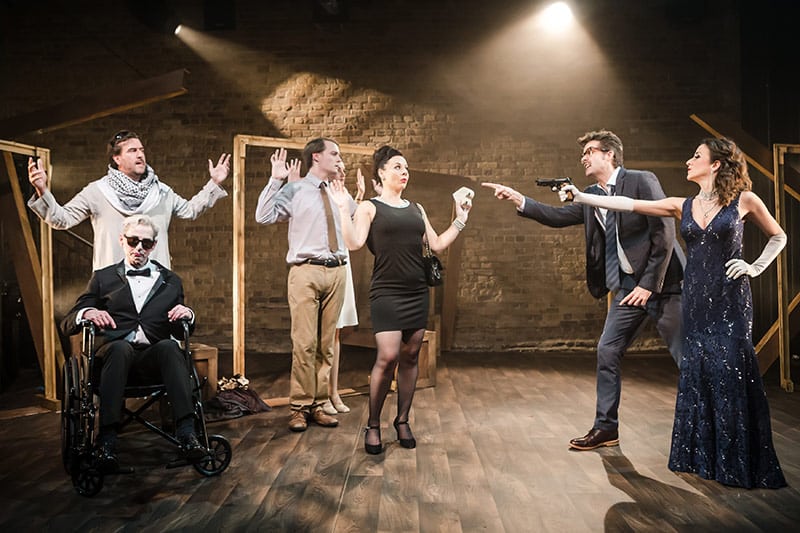 Otherwise, the musical numbers – almost every one of them written in a different style – comprise a portmanteau hommage by Ahrens and Flaherty to all the songwriters they seem to enjoy the most: thus do we hear Sondheim in ‘Something Funny’s Going On’ (but on the way to the casino, not the forum), Maltby and Shire surface as the inspiration for the love duet between the leads, ‘Nice’, Leslie Bricusse boldly holds forth through a Shirley Bassey-esque ‘Rita’s Confession’, and a splendid parody of Edith Piaf emanates from the husky lungs of Dominique’s ‘Speaking French’.  And so on.  Part of the fun is matching up the songs to their source inspirations, making the show more of a madcap revue than proper ‘book’ show, but that is entirely in keeping with its light-hearted ambitions.

It’s a fun night out, beautifully realised with an original take on a well-worn concept, and with much to bring a smile to the lips.