Julian Eaves reviews Lord Dismiss Us at Above The Stag and finds a smartly-written comedy of manners that has particular resonances at the present time. 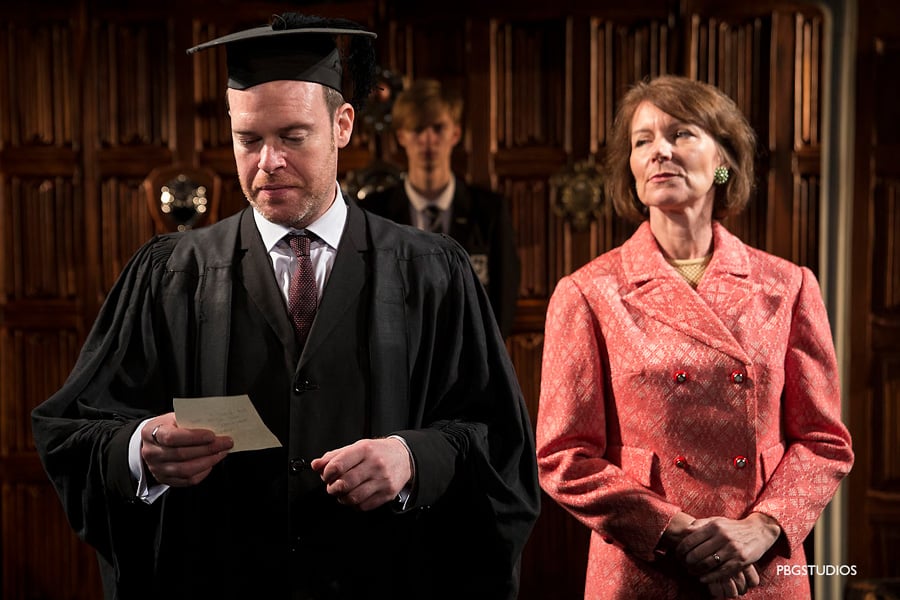 For those of you looking for a worthy follow-up to Alan Bennett’s ‘The History Boys’ or Julian Mitchell’s ‘Another Country’, a smartly written, tightly plotted comedy of manners set in the homoerotically charged atmosphere of an all-boys school, then look no further: it is here.  Glenn Chandler has taken Michael Campbell’s mildly campy novel of the same name, written around the time that the Wolfenden Report had recommended to partially decriminalise male homosexuality between consenting adults in private, and turned it into a taught entertainment, packed choc-full of nifty one-liners and often lovely double-entendres, the occasional song or prayer, a spot of amateur dramatics, and laced it with a smattering of menace, seduction, threats, guilt, violence, betrayal and redemption through creativity.  In an economical but vibrantly fluid production at this miniature venue, Chandler directs his own script – an expanded and more elaborated version of what was seen earlier this summer on the Edinburgh Fringe – with confidence and some style. 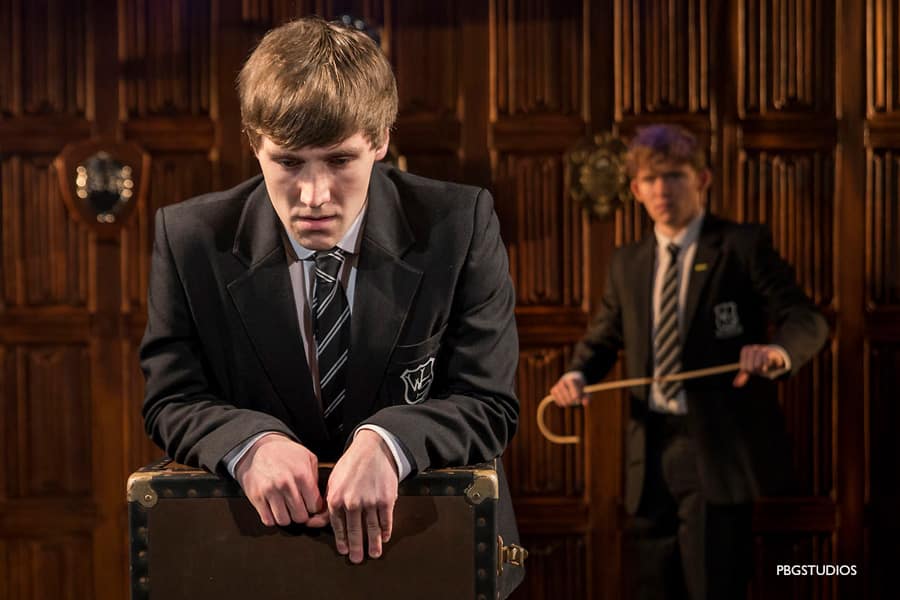 Here, the meta-metaphor we are offered for how society deals with the regulation of human sexuality is life in a catholic boarding school.  A new headmaster, Philip Crabtree – David Mullen, all caledonian, Calvinistic severity, yet very much under the thumb of his Lady Macbeth-like spouse, Cecilia, an icy Julie Teal – arrives to shake Weatherhill School out of its decadent torpor, smoking out perversion and vice and purging the establishment of any taint of imperfection.  So that very much recalls the post-war crusade to eradicate the ‘scourge’ of homosexuality from British society.  In this, his closest ally is the uptight prefect Steele – Matthew McCallion in a very impressive professional debut.  Yet, even Steele baulks at the ruthless single-mindedness of the new head’s obsession, especially when the witch-hunt runs – as those things usually do – out of their control.

There is also another newcomer on the scene, an arrival from Eton – moving to a cheaper school for apparently economic reasons – in the wide-eyed innocent form of Joe Bence’s Nicholas Allen: hugely experienced, Bence is a delight to watch, with quicksilver reactions making every moment he’s on stage an exciting adventure.  Langorous to the point of boredom, by contrast, is the seemingly effete old-hand Terry Carleton – Joshua Oakes-Rogers – who is stung out of his apathy by a sudden and overwhelming fascination for Allen.  That sidelines – with vicious consequences – his former crush, Peter Naylor – Jonathan Blaydon, relishing every moment of frenetic playfulness.  The staff are completed by the caring Eric Ashley – Lewis Allcock making the most of this still eye at the centre of the storm – and Mullen’s wildly contrasting double role, Reverend Cyril Starr.  Remarkably, just these seven manage to conduct through a tremendous slice of school life, complete with a school play put on for the governors and a riot. 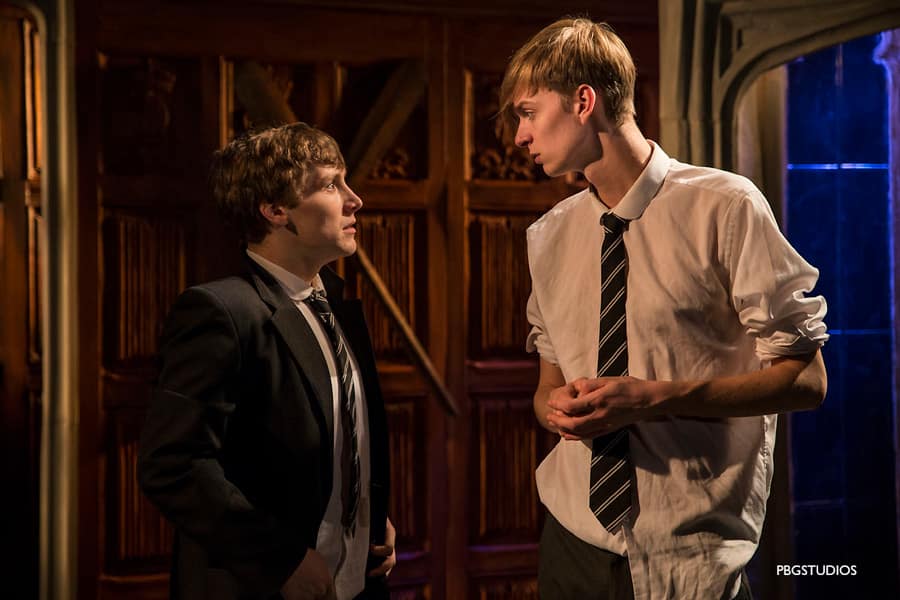 This is made so much easier for us, though, in designer David Shields’ handsome but oppressively monotonous oaken panelling, admonished by the occasional shield or crest, and framed with faux Gothic doorways: we learn that the school has stood there for about 200 years, which puts it right at the start of the great 18th century revival, reminding us that the play is really about the state of the nation as a whole.  However, the staging mainly relies on the trunks that were its only source of ‘set’ in Edinburgh: it is arguable whether it still needs them, or quite as many as we get in the modest space of this venue.  The rest of the production now looks much more naturalistic.  Anyway, very much a product of the 60’s rejection of received opinion and inherited traditions, the play points out, again and again, that human beings find themselves living in a society that absolutely fails to recognise who they are and what makes them tick.  The only solution is to reject that society and go off in search of something else, something better.  And that is precisely what happens in this drama.  As we stand poised at a moment when the country seems unable to work out what it wants to do with itself, this play could not have been revived more opportunely. 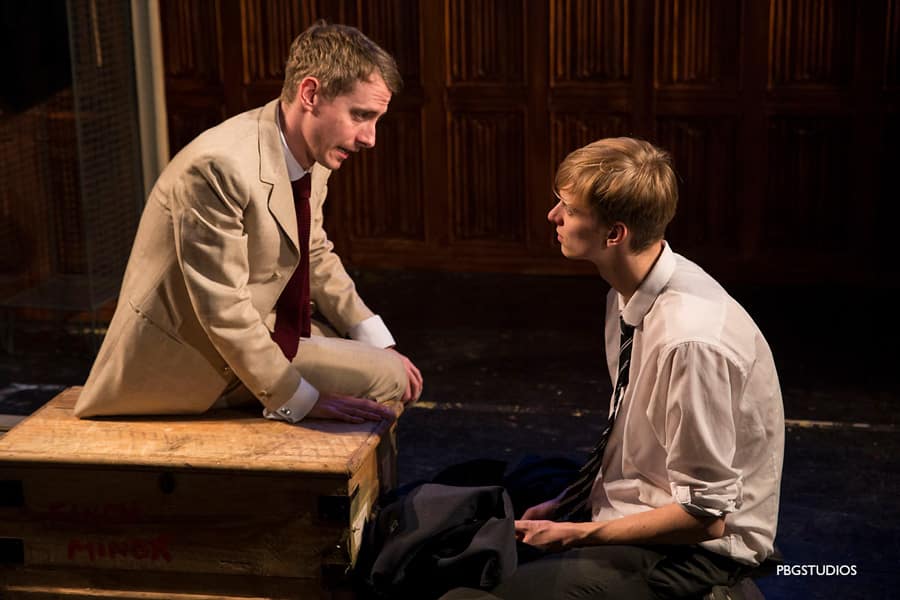 Chandler’s company, Boys of the Empire Productions, has done a fine job in putting all this together, and it has done us a really important service in reminding us of this amusing and intelligent writer.  Let us also remember that the social reform which began with the Wolfenden Report was taken up and followed by Parliament, against often widespread public opposition.  It is also a timely reminder that our government should know what its sovereignty means and that it should show the way in providing wise leadership and work towards the improvement of society as a whole.  There is such skilfulness in the writing here, not least in Chandler’s expertly controlled compression of the novel into about 20 short scenes, the transitions between which are achieved with an often marvelous command of theatrical technique.  Yes, there are times when the management of scenes is less secure, or when our attention is not perfectly focussed.  Nevertheless, there is also an unmistakable feeling as the play progresses, that everything that is said is tending, relentlessly, towards the culminating moment of the work, where the young people discover the spirit of rebellion, throw off the shackles of repression, and seize control of their own lives, determined to make something good of them.  It is a thrilling moment, and a heart-warming one.  After all these years, the strength of this human message has lost none of its power, nor importance.  A brave and thoughtful revival, and one for which all should be congratulated.

BOOK TICKETS FOR LORD DISMISS US