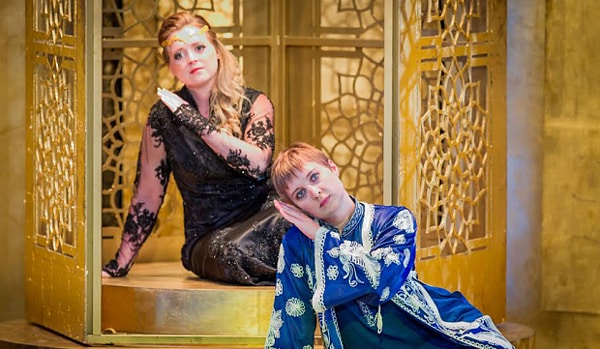 There are many reasons why an opera wildly successful at its opening falls by the wayside in subsequent generations. It may be down to changes of taste, to challenges of expense and resources in mounting a plausible production, or to the sheer technical difficulty of finding the right kind of voices. There are elements of all three behind the fading reputation of Lakmé by Léo Delibes, first performed to great acclaim at the Opéra Comique in 1883. Modern interpreters are ill at ease with its unabashed orientalism, and find it hard to perform it as written or to devise an alternative scenario. A setting in a temple shrine, with elaborate choruses, a goodly number of principal roles, and a large symphony orchestra does not permit any cutting of budgetary corners. And finally there is the coloratura challenge of the demanding title role whose last acknowledged champion was the vocally peerless Joan Sutherland. Yet, Holland Park Opera, here working under director Aylin Bozok, show that these problems are by no means insuperable where the company have confidence in the quality of the work itself and perform it with sensitivity and full commitment.

The first and simple point that needs to be made about Lakmé is that it is a work of sustained musical calibre. Everyone is familiar with the shimmering insinuating lines of the famous Flower Duet in Act One, which seem to crop up again and again in television advertisement of ever increasing implausibility. Yet that is only one of a series of instantly memorable melodies democratically distributed among the leading roles across its three acts. Moreover, the orchestration is at different points lush, delicate and subtle when it needs to be, with more than a few unexpected harmonic shifts at points of particular drama and anguish. There is, against reputation, little that is purely decorative. Delibes may have trained under Adolphe Adam, and may be better known now as a composer of ballets such as Sylvie and Coppélia, but he and his librettists knew well how to develop both story and character through the full resources of opera in the grand style.

At the heart of this opera, behind the surface orientalising, is a more interesting story of a clash of cultures that anticipates the themes of A Passage to India. Nilikantha (David Soar), a renegade Brahmin, keeps his daughter (Flur Wyn) in pure isolation in temple gardens as a focus of sacred purity. But a group of English visitors blunder into the compound, and one of their number, an army officer, Gérald, (Robert Murray) lingers, meets and falls for Lakmé while her father is away. The plot focuses on Nilikantha’s desire for revenge on the Englishman, the latter’s internal conflict between his new love and his duty to his regiment, and Lakmé’s determination to maintain both her commitments to her religion and to her lover. The highpoints include two bustling, teeming crowd scenes, with novel syncopations in the music, the famous Bell Song in Act Two with which Lakmé is forced to lure her lover back into the temple, and the set-piece aria for Gérald in which he explores his own dilemma.

Choice of setting and scenery are more than usually important in this opera if it is to succeed. There needs to be a sharp contrast between the privacy, seclusion, inwardness and innocence of Lakmé’s temple shrine and the hustle and bustle of the market which is a public arena that threatens violence, disorder and overturning of racial, social and religious certainties. This is well achieved here by designer Morgan Large. The long and deep stage at Holland Park, which can be problematic in small-scale operas with an indoor focus is in fact an advantage here. The large chorus has full scope to perform choreographically and develop a range of moods from everyday swarming business through to ugly threats of violence. At the still centre of the action stands a gilded shrine surrounded by a sequence of large latticed lotus petals, rather like mille feuilles wedged into an ice cream. The petals are moved back and forth by the temple attendants to screen or open the centre of the shrine, occupied either by Lakmé herself or by a ballet dancer who comments on and interprets the drama at intervals. The colour scheme of the costumes explores a range of turquoises and blues and these combine well with the gilded interiors to generate a tone of cool restraint and sophistication rather than gawdy Bollywood bling.

There are no weak links in the cast. Murray and Soar are fully on top of the vocal and dramatic challenges of their roles and the minor roles of the other English visitors to the temple gardens are neatly and distinctively characterized. Frédéric, the other officer, who stays a model of conformity, is a fairly thankless role, but Nicholas Lester sings and acts with conviction. As Mrs Bentson, Fiona Kimm is ready to take voluble offence at the slightest apparent affront to her cultural sensibilities, and her two charges Rose (Fleur de Bray) and Ellen (Maud Millar) make the most of the chances they have to explore India. The two temple attendants Mallika (Katie Bray) and Hadji (Andrew Dickinson) are on stage for much of the action. They have a lot of sitting around in attendance, which is not always easy to sustain across an evening, but they carried it out with aplomb. The Chorus are a mainstay of the action in each of the acts: they were fully on top of their parts and acted plausibly both as individuals and as a body. However, this opera stands or falls on the singer-actor in the title role. Fflur Wyn, who also heads up the cast of Alice’s Adventures in Wonderland, was fully equal to the task. She has a grace and stillness as an actor that commanded attention from the start, and she paced herself excellently against the punishing demands of the role in every act. Particularly impressive was her handling of the ‘Bell Song’ in Act Two: this is really three huge arias joined together, each with more stratospheric melismas of tone than the last. Wyn combined purity and control with an affecting projection of the dramatic context that commanded great respect. It would be easy to see the aria as a simple showpiece moment disconnected from the action, whereas in fact it is a desperate, enforced projection of victimhood under the cover of display. These qualities came over very powerfully and affectingly in her performance.

Conductor Matthew Waldren whipped up a storm from the City of London Sinfonia when needed, but also found space for the chamber sonorities of the many delicate instrumental solos – especially from the flute and other woodwinds. It was a real pleasure to see the full orchestra rather than losing them to view in a conventional pit, and the good balance between singers and players throughout the evening confirmed the wisdom of this decision. While Holland Park Opera never offer immediate revivals it is to be hoped that this immaculate and gracious production surfaces again in future years.