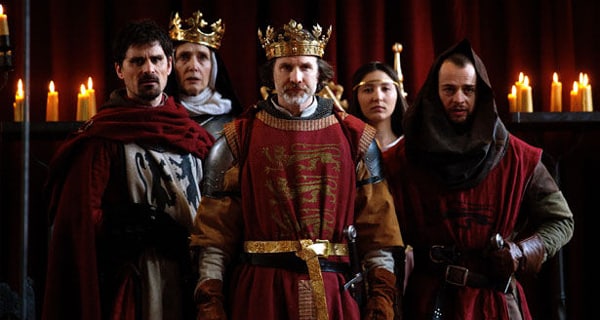 William Shakespeare wrote ten plays about the tumultuous monarchies which reigned over England: Richard II, Henry IV (1 and 2), Henry V, Henry VI (1, 2 and 3), Richard III, Henry VIII and King John. The latter, thought to have been written after Richard II and before Henry IV Part 1, is rarely done, at least in comparison to the others. This suggests that the play has “issues”. But does it?

On the strength of James Dacre’s production, currently playing at the Globe, the answer is a resounding “No”.

Surprisingly, this is the first time King John has been tackled at the Globe since it opened in 1997. It has been worth the eighteen year wait. Dacre’s production sizzles with energy, tells the convoluted political tale with clarity and humour, and revels in the excesses the characters and plot twists and turns provide. Slightly naughtily, there are lines added to Shakespeare’s play from The Troublesome Reign of King John, King of England, a play possibly written by George Peele. But these additions are neither jarring nor otiose, and the end result is a romp through a tense time for Anglo-French relations told through the very specific prism of the post-Henry VIII split with Rome, awash with venom, betrayal and strategic gambits.

Nicholas Hytner famously remarked that Shakespeare could be unintelligible: “The first five minutes is always tricky” he told the Cheltenham Literary Festival in 2013. Dacre’s production proves Hytner wrong, if proof be needed. The singular clarity in delivery from all of the actors in the company makes this one of the most readily understood productions of Shakespeare seen at the Globe. This is not just about enunciation and audibility; the company here lives and breathes the language, turning it to full advantage, drawing the audience into their confidence, to their support. It’s rhetoric in full blooded action.

As it plays out, the play seems startlingly relevant. The conflict between classes, the failure of the governing body to have the support of the country, the willingness of that body to turn against its allies for short term gains, threats from the rich and powerful to keep the governing body in check, uneasy alliances and unfriendly coalitions; add poisonous personal attacks and unabashed selling out and you have not just the meat and bones of King John but a caustic overview of the recent UK elections.

In the programme, Professor Leon Black argues the case for the play to be better regarded:

“Unconnected with the double tetralogy on the Yorks and Lancasters, bearing little resemblance to what we are taught of John in school (Magna Carta is never mentioned), it looks like a neglected step-child. It should be more noticed, for,it contains splendid things – among others, a notable diversity of tones, including the patriotic, the conspiratorial, the shocking, and the ludicrous. It gives directors and actors a wide range of choices.”

Professor Black is spot on.

Dacre takes full advantage of the play’s many moods and shifts of emphasis and style, with the result that the evening is rambunctious and thoroughly engaging: something like a political roller-coaster ride. This is a play where it is hard to work out who the real villain might be – there are a number of contenders for that appellation. But the real benefit of Dacre’s production is that the characters get full value, and what rich and rewarding characters they turn out to be.

Jo Stone-Fewings is in spectacular form as the titular King John; I have never seen him better than he is here. He subtly evokes the sense of the cartoon version of the character, the Peter Ustinov silky voiced lion from Disney’s Robin Hood, and is venal, capricious, thoughtful, majestic, quick-witted, pitiful and grotesque. He is wonderful to watch and his use of his richly dark-toned voice is masterful – he can flick from whiny comedy to blustering rage in the blink of an eye.

As a whole, his John is rather like Richard II 1/2 – a character that sits somewhere between the extremes of Richards II and III, with characteristics and attitudes common to both or one. Yet, Stone-Fewings’ John is wholly unique at the same time; a point of singularity that blazes in its own way. It’s a powerful, engaging and completely convincing portrayal – one that will set the standard for a long time to come.

A small quibble arises over the manner and matter of John’s death. It seems here to be too neat, over too quickly and without scale or an essential level of hideousness. John was, after all, poisoned in the play; in life, dysentery claimed him. Either way, it wasn’t pretty. Depriving Stone-Fewings of a degrading, appalling death by poisoned rotting bowels takes some sheen off the performance. He has worked so hard, made John so real, the final, ghastly death rattle should not see him depart with a whimper. But it’s a tiny blot on Dacre’s copy book; it merely deprives the audience of seeing just how good Stone-Fewings could have been.

Alex Waldmann continues to increase in stature as a classical actor. He is a wonderful Bastard here – noble of spirit, courageous, rowdy, brash, quick-tongued, fiery and audacious. A Bastard’s bastard. Everything the illegitimate son of the crusading Richard The Lionheart would be expected to be. All man and mouth, quick with a sword, and deadly – on the battlefield and off. A joker and anything but a joke. Waldmann gains the audience’s favour easily and charts his character’s rise in stature to match Stone-Fewing’s John’s fall. It’s a mature, cocky and impressive performance. His final scene is magnificently touching.

As the matriarch of all matriarchs, Eleanor of Aquitaine, Barbara Marten shows a spirt and agility of wit and manoeuvring that certainly makes one wonder if James Goldman took his cue for The Lion In Winter from Shakespeare. Goldman’s Eleanor and Shakespeare’s have much in common, and Marten fleshes out every morsel of the feast for an actress that Shakespeare’s pen provides. Regal, haughty, manipulative, but always electrifying, Marten delights in the dangerous games Eleanor incites and assists. Her eyes communicate pages of words with quick, penetrating glances. Completely real and understandable, Marten’s Eleanor shows what a terrific role this is for an actress of skill.

Marten’s Eleanor is made all the more intoxicating because of the small scene where Marten plays a different character – Lady Faulconbridge, mother of the Bastard. Here, Marten is entirely different, almost as though another actress was playing the part. Broken, sorrowful, resentful, hurt, humiliated – Marten is terrific. And Lady Faulconbridge an important spoke on the ever turning wheel of fortune. It is she who acknowledges the Bastard’s progenitor, despite the cost to her reputation, and thus it is she who sets her son upon the course that will see him rise in stature and rank, beyond his dreams.

Tanya Moodie is an outstanding Constance, mother to Arthur, the son of John’s deceased older brother, Geoffrey. Arthur’s claim to the English throne is perhaps as tenable as John’s, and Constance wants him crowned. Moodie can trade insults with the best and has no difficulty matching Marten or Stone-Fewing barb for barb. She plays Constance as mother first, mother of the crown second. In this, she is the mirror opposite of Eleanor, for whom power is all important. The look on Moodie’s face as Arthur is taken away is extraordinary, a Renaissance painting of honestly felt devastation, and she handles the lament over her son’s fate with bristling, brutal intensity.

As the devious, duplicitous and determined Cardinal Pandulph, Joseph Marcell shines like a jewel on the Pope’s hand. Unflappable in the face of the unrestrained, his crafty Cardinal wields power without hesitation; an excommunication here, an excommunication there – anything to maintain Rome’s supremacy, and bring the Will of the Pope into fruition. It is hilarious that the most Machiavellian character here is the Cardinal, but that reflects the views of Shakespeare’s times entirely and leads to laughs, now as well as then. In a modern reading, you could almost see the Cardinal as the embodiment of the European Union or the Banking World: he is an enemy to some, a friend to others, and backed by tremendous, well funded power.

One of the play’s most difficult scenes comes when Hubert (Mark Meadows) comes to blind Arthur (Laurence Belcher) with red-hot pokers and kill him but the lad talks him out of it. It’s a hard scene to make work, unless there is a disturbing paedophilic undertone given to the proceedings. But here, with both fine actors playing it entirely for real, with conscience and consequence being the cudgels of the debate, it works spectacularly. You are certain the boy will be blinded; then you understand why Hubert refuses to do the dark deed – and this sets up the eventual fate of Arthur to be cripplingly sad, rather than ludicrously silly.

There are no weak links in the cast and Simon Coates, Ciarán Owens and Daniel Rabin do especially fine, thoughtful work. As does Aruhan Galieva in two very different roles: she is a surprised bride when the spotlight of negotiations turns to her Blanche of Castile, a spanish princess; and, later, as a bizarre and slightly feral Peter of Pomfret, she brings the sense of one of Macbeth’s witches or Caesar’s soothsayer to proceedings.

Orlando Gough’s original music works particularly well, and adds significantly to mood and tone. Scott Ambler provides deft movement and the stylised fight sequences (Rachel Bown-Williams and Ruth Cooper-Brown) are very impressive – more impressive, actually, than any fully staged sequence would be likely to be. Jonathan Fensom’s set design makes excellent use of the stage, and the platforms he sets amongst the groundlings, and the central ramp where Arthur finally goes to God, all work well.

This is a truly engrossing, fascinating and thrilling production of one of Shakespeare’s ugly ducklings. James Dacre and his exemplary cast, led by Stone-Fewings, Marten, Waldmann and Moodie, entirely make the case for King John to be seen as a true Swan.