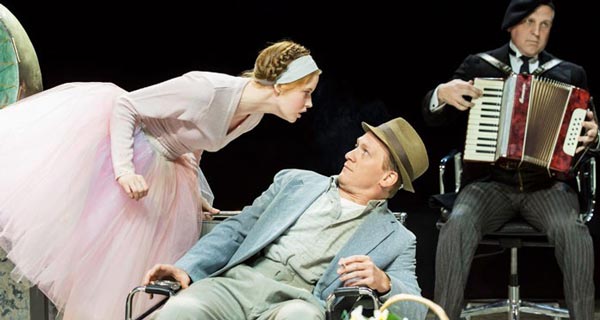 When an overwhelming urge to flee from the auditorium of the Old Vic at interval surges through you, as it well might if you are attending Maria Friedman’s revival of High Society there, resist it. Truly. Resist it. Because the first fifteen minutes or so of Act Two are as good as, if not the equal of, any fifteen minutes of any musical currently playing on the West End (the final fifteen minutes of both of Gypsy’s acts excluded).

A pre-wedding ball is being held inside a stately residence on Long Island as Act Two opens. The sequence gives a glimpse into the activities of the principal characters and centres around some dialogue and two numbers: Well, Did You Evah? and Let’s Misbehave. The first is wry and smooth, like the kind of gin cocktail which would entice Uncle Willie, and the second fizzes and explodes with energy and style, rather like a shaken bottle of vintage champagne (appropriate given that is what everyone mostly is guzzling).

Suddenly, in this sequence, the show finds its feet and stampedes. In the main, this is down to three things: superb orchestrations (Chris Walker), skilled musicianship (Theo Jamieson, Joe Stilgoe and a red hot band) and inspired, creative choreography (Nathan M Wright). Together, these three magical elements work musical theatre alchemy, and the cast go along with it infectiously, without restraint. It’s irresistible.

Walker’s orchestrations throughout are, well, swell, and they infuse Porter’s score with a sense of the smoky, sultry fifties in which this revival is set. The shadow of Rock’n’Roll is palpable in the fabric of the score in this version, so everything musical has a fresh, very sexy, aspect. Wright takes that lead and gallops with it, ensuring that the nimble-footed cast dance with excitement and verve – the tap dance sequence is superb – with steps that pulse with the excitement and sensuality threaded through the music.

It’s all helped, immeasurably, by a fabulous sequence where Stilgoe and Jamieson play a piano duet/feud/display showmanship par excellence. Watching these two play on the same piano and then play together but separately, when a second piano appears, is electric. The whole sequence is joyful, and cleverly, and completely, establishes the kind of Swell Party all the various characters and guests are enjoying. Intoxicating.

Stilgoe is also critical to the second true highlight of the evening: the pre-show entertainment, where he, alone at the piano, plays both instrument and the audience, teasing co-operation from the latter and showing his real skill as an entertainer on the former. He composes a silly mash-up on the spot, based on audience requests, which fizzes with humour and musicality, easily setting exactly the right tone for the evening.

These two, very different, openings to each Act promise an adventurous, canny and visionary directorial touch from Friedman. Except in small ways, however, that promise is rarely fulfilled, most often dashed upon the disastrous rocks of miscasting. Friedman’s most consistently inspired contribution here turns out to be her choice of choreographer and musical director; in entirely the right way, they are the rocks on which the glories of her production depend.

There are many odd choices to behold as the evening unfolds, but none perhaps more odd than the decision to stage High Society in the round. Very odd staging turns out to be the only real result of that decision. Accentuating the difficulties of doing such an old fashioned book musical in the round is Friedman’s choice to create the illusion of a large swimming pool in the limited space. While undeniably pretty, the presence of the pool leads to jarring and uncomfortable manoeuvring around the pool’s edge. The sight of a model yacht floating on the pool’s surface seems scant reason for requiring scenes and songs to be conducted, almost on tip-toe at points, across a shimmering pool.

Nothing happens in the round which could not happen more easily on the Old Vic’s traditional proscenium, and everything that happens would work more effectively if that had been the staging choice. There are a lot of lighting (Peter Mumford) issues; cast members are unaccountably in darkness when there should be light. The opening number, the titular song, suffers particularly because of the imprecise, or, if precise, bizarre, lighting choices, which hinder the effectiveness of Wright’s quirky and compelling choreography.

Although there are many entrances and exits through the auditorium, nothing is improved by that. There is no sense of closeness gained between audience and cast; no intensity of intimacy or ease of understanding achieved. Playing in the round leads to two inevitabilities: almost always someone can’t see what is important in the staging and always one part of the audience can see clearly now the rest is reacting. In this case, the first happens continually, and the second proves disheartening. Watching fellow audience members lose interest in proceedings does not improve your own enjoyment of the piece.

The best performance comes from Jamie Parker who has, in recent times, undergone something of a transformation into a leading man of the musical stage. Parker plays the hard drinking, wise-cracking, hack reporter, Mike Connor. More Kolchak than Clark Kent, Parker’s Mike is smooth (in a rumpled kind of way) and worldly, a man’s man. He is assured in the singing and dancing, bringing an ease, an obvious simpatico, to all aspects of his musical theatre performance: scene work, dancing and singing. It is his energy which keeps the second Act alive after Let’s Misbehave.

He has some welcome assistance from Jeff Rawle, whose dipsomaniac, skirt-chasing Uncle Willie is first-rate. His relaxed but frenzied rendition of Say It With Gin was a genuine tonic.

As the charming, yacht-loving C K Dexter Haven, Rupert Young gives his all. He is genuinely pleasing in most respects, and his scenes with Ellie Bamber’s bratty Dinah are genuine and awash with rapport. He mostly gets away with the singing, but that is not his forte. (Indeed, apart from Parker and Rawle, there is no one in the principal cast whose forte could be said to be singing – a curious position for the cast of a musical to be in.) Young brings a casual masculinity to his scenes which is endearing, but, in truth, the part requires more than that. Deep down, the audience has to want Dexter to end up with Tracy rather than either Mike or her current fiancée, George. But as Mike is by far the most charismatic and persuasive, that is not how things play out.

However, that might be more about Kate Fleetwood’s angular, abrasive and affection-less Tracy than anything else. Fleetwood is a good dramatic actress, but being qualified for Lady Macbeth does not qualify one to play Tracy Lord in High Society any more than, say, being a gifted comic actress would qualify someone to play the lead role in Woman On The Verge Of A Nervous Breakdown. Musicals require special skills. You need to be able to act, sure, but you also need to be able to sing, and not in a “I can hold a tune” way but properly sing, deliver the vocal chops, the musical goods. At the very least, you must be able to sell a number. Fleetwood can’t sing in that way and, inevitably, her performance here suffers.

Accentuating that deficiency is the choice to play Tracy with such harshness, such lack of warmth, such acidic venom. Tracy is a very difficult role; the actress has to have many qualities, but a core of internal warmth, compassion and understanding hidden under a bravado of indifference, quips and quibbles is the fundamental one. Otherwise, her father’s cutting assessment and subsequent apology goes for nought. Most of the characters adore Tracy; the audience needs to know why that is.

There is nothing warm or charming about Fleetwood’s Tracy. Nothing. She goes through the paces and delivers the lines and sings the songs – but without an enthusiasm for the form or even an understanding of it. It is not exciting to listen to Fleetwood sing and her own unease in the role shines through. She handles the drunken scene well enough, but that is not the bulk of the play.

This disconnection with musical performance pervades the other casting too. Annabel Scholey, Barbara Flynn and Christopher Ravenscroft all seem ill at ease in the musical form. Scholey fares best, her photographer, Iris, is pert and interesting, but there is no connection with the musicality of the piece and no getting away from the sense of discomfort that accompanies her singing. Flynn, as Mother Lord, really only has one effective moment (the morning after she has permitted her errant husband to resume connubial bliss provides Flynn with a Carry On moment in which she revels) and Ravenscroft has none, seemingly entirely out of his depth throughout. It’s not that Ravenscroft phones in his performance; he doesn’t even reach for the receiver.

Richard Grieve plays George as moronic, self-important and deathly dull. The part is not written that way, and nothing interesting arises because of that choice. George is humourless, according to Dexter anyway, but that does not mean he is completely charmless or without vitality. It needs to make sense that Tracy is engaged to him and he needs to be a viable alternative to Mike or Dexter. The chip on George’s shoulder is not a constant presence, so there is not a bittersweet conclusion to his story, just the vinegary backwash of sour grapes.

As Dinah, Bamber does not seem to fit with her family, but her obvious affection for Dexter is clear. To say that a youngster is precocious is not the same as saying the youngster is vulgar or smarmy, but they seem the qualities Friedman is content for Bamber to explore. It’s a pity, because Bamber’s natural shine and warmth is evident, but all too rarely. Clearly though, she is adept at doing that which is asked of her.

The ensemble work hard, singing finely and dancing as well and enthusiastically as the small space allows. Wright cleverly makes a virtue of the confines of the circular playing field, and the choreography seems the one aspect devised specifically for the in-the-round playing. The combination of band and Cole Porter is joyous throughout.

At the preview performance I attended, there was some clear enthusiasm from the audience when the show ended leading to a partial standing ovation (led by the director herself). So, clearly, some people had a swell party.

It’s Friedman’s casting and directorial decisions about the manner of playing which prevent this High Society working as well as the Let’s Misbehave section suggests it should. At various points, it was difficult to resist the notion that choices had been made because they were directly opposite to the natural choices. Rather than illuminate the piece and the characters, obfuscation and oddness seems more important to Friedman. This is not how Friedman approached her direction of Merrily We Roll Along, so why here?

Well, seriously, Did You Evah?