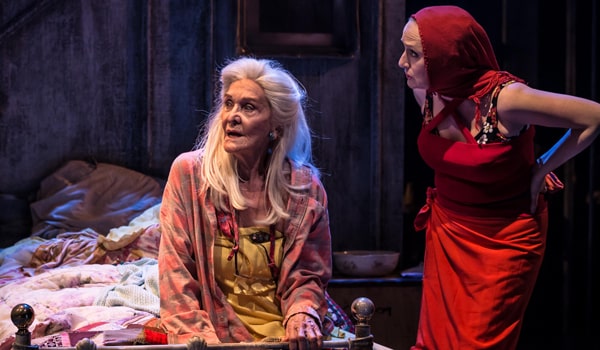 In 2006, the story of the two Edies, was musicalized and propelled onto the Off Broadway and Broadway stages taking the story of Grey Gardens to a new audience. Doug Wright, Scott Frankel and Michael Korie successfully became the first musical team to adapt a documentary for the musical theatre. It’s taken 9 years for the show to reach our shores, but under Danielle Tarento’s producership and Thom Sutherland’s direction, the show has now landed in London and it’s been worth the wait.

Entering the theatre, you are immediately struck by the ghostly wreck of Grey Gardens, the house that gives the musical its name. Designer Tom Rogers has an incredible eye for detail. It’s one of the best set designs I have ever seen in this venue. Walking to our seats across the stage you could hear fellow patrons commenting on the shocking state of the house, period newspapers, dead leaves and junk pervade, walls are peeling and everything is worn and overdue for junking. For the house is a major character in this unfolding drama, It is the stage upon which these women’s lives are played, they are isolated and the houses decay is symbolic of the decay in their lifestyles both in real and psychological terms. 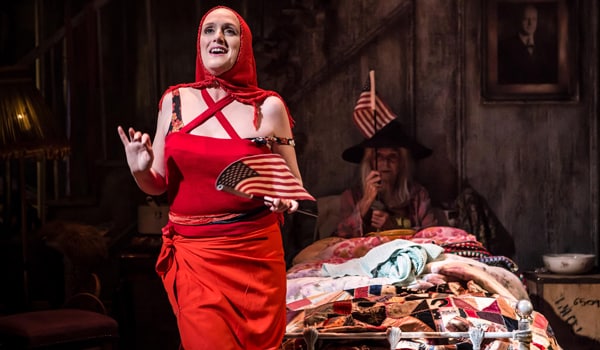 It’s in this environment that we meet mother and daughter, old, alone, living in filth. They engage in light ribbing bickering and a particular type of banter that bought them fame as documentary subjects, you never truly know if they are affected by each others barbs, but in truth it’s the sort of relationships that many mothers and daughters might have in private.

Sheila Hancock and Jenna Russell bring enormous gravitas to the roles of the two Edies. Hancock sits out a great deal of Act One, with Russell taking on the younger self of Big Edie. The superb casting of Rachel Anne Rayham as Young Edie gives the piece continuity, and the passage of the characters through time becomes real as each works off each other with small traits that makes their linking all the more believable. It also makes you wonder whether daughters do indeed eventually become their mothers. Russell and Hancock are simply sublime.

Grey Gardens is a house infused with ghosts of events past. During Act One, events from 1941 are played out. The audience gets to see Little Edie’s character and future destroyed when her mother all but declares to fiancé Joe Kennedy that her daughter is a slut. Edie’s production number Hominy Grits leaves us with certainty that Little Edie is doomed from the start. As the audience we are the ultimate voyeurs getting a view of what has come before, ending the act with the collapse of the mother – daughter relationship and the departure of Little Edie.

There’s little said about what happens in the 32 years between Act One and Act Two but one thing becomes clear, for some reason Little Edie came back! Life has not been kind to the ladies and we now find them destitute. The house is riddled with cats, racoons and fleas. It is about at this point that the documentary team came into the picture and the audience substitutes for the team allowing the characters to break down the fourth wall and bring us even closer. 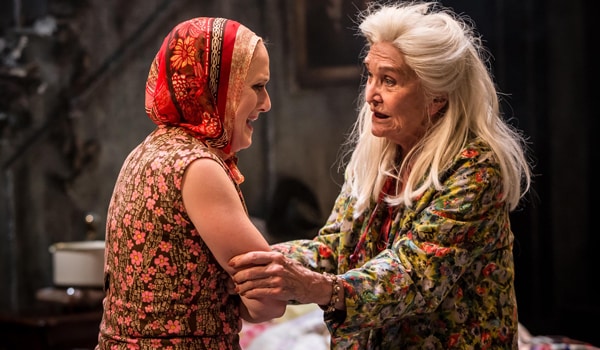 Both Russell and Hancock remain true to the documentary characters but there is no doubt that we are allowed to see much more of their inner workings particularly Little Edies fear of mental illness and potential commitment being part of her life if forced to leave the protection of the house.

Aaron Sidwell plays Jo Kennedy, he’s swell and as handsome as you could ever wish for until the taint of scandal is placed in his mind by Big Edie and he crumbles and runs. Sidwell is building a reputation as one of our most versatile musical theatre actors and he inhabits both the regal air of a Kennedy, perfectly building his life towards the Presidency, and also the role of Jerry, who in latter years is helping the two older women cope day to day by dishing out flea powder and doing repairs.

Jeremy Legat plays George Gould Strong, Big Edie’s accompanist, talented, quick with a withering one liner at hand and Billy Boyle plays Major Bouvier, who is critical of his daughter and her values, his Act one number little girls Marry Well implores the women of the family to find “staunch young patrician republicans” to marry.

These characters from Act One form a ghostly chorus in Act Two. Remnants of the past constantly haunt the two Edie’s and Sutherland’s staging has the past ever present in the minds of the present Edie’s. There’s no escaping their past.

There’s constant comment that they live in a situation where once the world constantly wanted to get in and now the occupants can’t wait to get out. Something has to be said for the fact that Little Edie does indeed leave between acts but for some reason she returns and though tempted, remains to look after her mother. Edie’s final attempt at leaving at the end of the show collapses as we see the hysterical fear of Hancock’s Older Edie realising that she is alone.

The music of Grey Gardens was supervised by Simon Lee and is directed nightly by Michael Bradley. The pace never slackens and the tone is both bright and jaunty and haunting as needs be.

Choreographer Lee Proud, brings movement to production numbers like Marry Well and Choose To Be Happy whilst keeping movement utterly realistic in some of the more intimate scenes. Both Beale’s are theatrical and Sutherland and Proud ensure you never quite know whether they are performing or not.

Perhaps the technical star of the show is lighting designer Howard Hudson, his ethereal lighting allows us to dismiss the house’s decay in Act one and brings the ghostly past into the present so perfectly. Subtlety pervades at all times but when combined with Rogers set and Jonathan Lipman’s costumes, the effects can be remarkable.

You will be hard pressed to see a better production of this musical. The casting of Grey Gardens is near perfect. Southwark Playhouse is building a strong reputation for presenting wonderful modern musicals and like some of their previous productions this one is sure to sell out so don’t miss it.