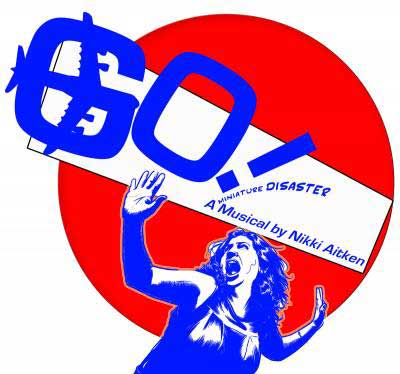 While the Edinburgh Festival blazes in Scotland and all critical eyes are focussed there, not enough attention is being paid to the programming at the Camden Fringe which, at the Phoenix Artist Club, in the centre of the West End, offers an eclectic and varied programme which could easily rival anything at the venues in Edinburgh.

Fringe Festivals are full of possibility. You can find anything there. Ripe, full performances of weak material; tentative explorations of new forms; challenging work for performers and audience; crowd pleasing jolly fodder; bad musicals starring hopefuls inspired by or spawned by programmes like X-Factor; strong material smashed into nothingness by unstable hands; and, rarely, an undiscovered star doing something challenging and effective.

Often, at festivals, it is not until the curtain falls that you know what kind of experience you have had.

This is not true of Go!, a “mini-disaster musical” written and performed by Nikki Aitken and having its debut at the Camden Fringe under the direction of Christopher Hurrell.

From the moment Aitken takes the stage and the lights come up, it is clear that this is the real deal: a properly rehearsed, properly thought through production of a new, and challenging, piece of musical theatre.

The challenges are all with Aitken and Hurrell; the audience gets to enjoy the ride, fly, flying away on a beautiful flying machine of silliness and camp melodrama.

The conceit is simple. Flight GO999 takes off with a curiously ill-matched group of first-class passengers, an efficient and in-control Stewardess (Martina), a bitchy and garish deputy steward who has designs of the carnal kind on the pilot and possibly the co-pilot and a stowaway. It never gets to its unnamed destination and the reason why…well, that would be telling. (It’s splendidly funny though)

The hook, the trick, the clever notion here is that all of these characters are played by Aitken in a fifty minute tour-de-force which has her doing everything from energising the passengers, to proposing marriage in a toilet, reflecting on broken marriages and giving voice to the Little Black Box which holds the key to why the flight goes awry.

Aitken is a powerhouse. She has an amazingly agile and full-throttle voice, which she uses here both effortlessly and magnificently. She is joyous in every way, with a nice line in comic timing and that rare skill, the ability to play multiple characters in one big ensemble number without confusing the audience as to which is singing when.

Hurrell directs proceedings with admirable clarity and there are inspired choices about staging and props, some of which inspire their own laughter. Everything is focussed and seeks to illuminate the text.

There are moments when the comedy is laugh-out-loud funny; others where Aitken’s vocal delivery of fiendishly difficult songs is simply rapturous.

But, of course, it is not all perfect. Some of the songs are not as arresting as others and too much is set in the same key or around similar key changes. But there is nothing in the score that some judicious trimming and excellent orchestration would not enhance. It’s a very worthwhile score, with admirable ambitions. And Musical Director Michael Roulston does it justice.

The character of the gay deputy is Aitken’s least successful character, but some of the others are so sharply observed, even as caricatures or semi-caricatures, that this is easily forgiven.

This is the kind of production which would be a cause célèbre at Edinburgh. It’s not perfect, but it is performed and directed with passion, skill and true commitment.

And like most flights, it takes off and lands well.

For more information on Go check out the Camden Fringe Website