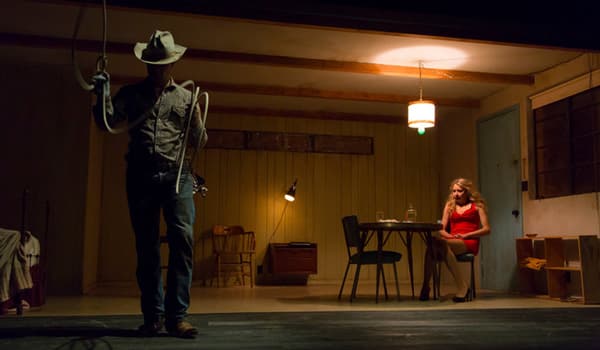 A hotel room somewhere out west. Seedy. The Mohave Desert is tangible.

She is on the bed, tousled sheets apparently evidencing sexual congress. Her hair cascades over her face, obscuring her features. He is lazing in a chair, like a nuclear reactor of sexual energy, idling, cowboy hat tilted, covering his features, brown boots shrieking masculinity, power, intrigue.

The room is more squalid the more you look at it. There are odd marks on the walls. Lassos or ropes lie around. The lighting is as tense as the human bodies. The sound is strong, penetrating, grating, explosive.

A man, an old man, sits in a chair to the right, part of the scene or not part of the scene, it’s not clear. Nor does it become clear as the play progresses. Is he a figment of the man’s imagination? Or is the old man imagining the action that is playing out? Or is something else altogether going on?

Whatever is true, the stage reeks, throbs, pulses and radiates profound sensual, sexual energy. There is a lust at play here which is both compelling and frightening. Who are these people and why are they in this room? And, when he comes, what is the intruder’s place in all of this?

At the core of the play are two former lovers, Eddie and May. Well, former might be debatable. Either way, they have had sex. They want to have sex. And they are apparently half-siblings. The knowledge of their filial relationship does not diminish the relentless power of their attraction; the edge never comes off their lust. Even the presence of May’s current beau, the gormless but perfectly ordinary Martin, does not dull the titanium strength of their feelings – whatever the consequences.

Shepard uses spare, evocative prose to bring the tale to life. Listening to his words in this faultless production, one is struck by the fact that Shepard should really have greater status than he seems to enjoy. His unsparing and savage vocabulary here is as good as anything Pinter wrote and a deal better than much of what Mamet is lauded for continually.

While the language is terse and explosive in parts, in others it is lyrical and splendidly engaging. When the man recounts the tale of the night that his father took him across the fields to meet his destiny, there is a terrific sequence about owls swooping in their hunt for food. The juxtaposed images of family and hunting are tender but vividly startling. You feel the breath of the boy, scared by the owls, drawn to the house his father takes him and its occupants.

There are a lot of monologues and staccato sections. This can be testing for an audience – but not here. Diction, precision and biting intensity ensure that every word takes its place in an all-engulfing symphony. For instance, when the father figure finally speaks/yells/explodes, the result is breath-taking.

As the tarantella of language plays out, as walls are punched, beds are used, lassos are whirled, shotguns are brandished and the unspoken is spoken, the tension and fear is volcanic. The sense and sensibility of sexual attraction is laid bare.

It’s made all the more thrilling because you can never be certain exactly what the truth is. Are the lovers really siblings and don’t or can’t care? Or is that just what they have been told in a futile effort to keep the father’s worlds separate? Or is the father playing over the guilty possibilities of his unleashed lust in his own mind? The plot and playing may be ambivalent in this one respect, but it is unerring in every other way.

Intoxicating is precisely the correct word.

Central to the power of the the production is the exquisite casting of the two doomed lovers, Eddie and May.

Nina Arianda, a fan of this play since her very youngest days, is utterly superb as Eddie. Powerfully sensual, impossibly attractive, but just as impossibly earthy and ordinary, Arianda presents a deeply physiological performance which plays out through intense physical theatre. Even when apparently resting and observing, Arianda’s Eddie is always on the prowl, always figuring out the next step.

You don’t often see, nor is it always necessary, for actors to use their entire body, from tips of fingers to core of intestines, to enliven a character – but that is what is required here of Arianda, and she delivers wholeheartedly. Her sense of trapped despair, resolute defiance and sultry acquiescence could burn an imprint onto the motel wall, so hot and powerful is her raw, all-consuming portrayal. Blistering stuff.

Remarkably, Sam Rockwell matches Arianda’s intensity and notches it up a level. He exudes a sexual intensity which is overwhelming, laces it with pain and indecision, and then overlays that with testosterone cowboy tropes which somehow seem utterly fresh, real and dangerous. The sense of truthful, fused intimacy he and Ariadna create is astonishing – you absolutely accept their sexual attraction, past and present.

He walks like a cowboy, lassos like a cowboy, drinks like a cowboy, rages like a cowboy, but, at the same time, silently screams for the woman who he believes is his half-sister and for whom he would do anything, including drive thousands of miles across desert wastelands. Rockwell is completely transformed in this role – brilliantly, violently, gently, utterly consumed, all but broken. It is a performance for the ages.

Gordon Joseph Weiss is superbly gnarly as the possibly malevolent old man, the father who, one way or another, is the cause of the pain shared by Eddie and May – but, equally of course, the pleasure. Weiss judges his grumpiness perfectly, adding danger and vengefulness to the mix in carefully measured quantities.

There is good work too from Tom Pelphrey, May’s current beau who just wants to go to the pictures with her, but suddenly realises he may have to duel the angry Eddie. He conveys the audience’s sense of being overwhelmed by the Eddie/May relationship with consummate ease.

Every aspect of the creative design aids and abets Aukin’s intensely specific vision. Dane Laffrey’s squalid set radiates the heat of the desert, the core relationship and the memory. It is both ordinary and dangerous. Justin Townsend’s intricate lighting also adds to the sense of heat, while constantly underlining the shadows that play at the fringes of the tale and which haunt/motivate Eddie, May and the old man. The snarling and explosive sound design from Ryan Rumery replicates and makes tangible the undercurrents of desire and consequence which flow so freely through the production. Anita Yavich’s costumes are also pitch perfect, utterly exactly right.

Tony nominations must be a certainty.

Book Tickets for Fool For Love