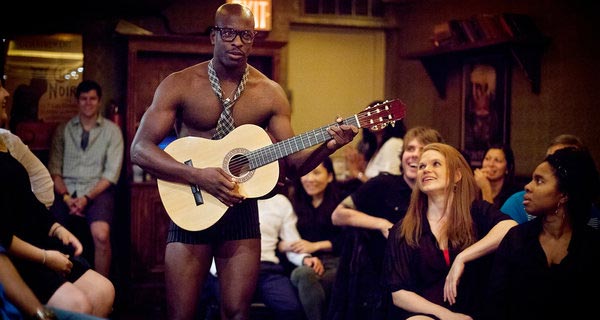 Excellence in theatre comes in all shapes and sizes, places and modes. It can be found in the luminous, resonant writing, in the challenging, bravura performance (acting, dancing, singing, miming, the list goes on), in the resplendent realisation of the imagination of a designer (of setting, costume, lighting or sound) or in the way combinations of some or all of such elements produce unforgettable results thanks to a director of especial vision.

Many evenings at present in any given week in New York, sometimes twice in one evening, a small space on one of the upper levels of the Roy Arias Stages in West 43rd Street plays host to meetings of The Drunk Shakespeare Society, ” a drinking club with a Shakespeare problem”. These are bawdy, rough and very funny evenings where a handful of talented thespians scamper through rough approximations of the writings of the Bard, sort of telling the stories of his plays but with the emphasis on silly fun rather than complex character study.

The result is fresh, frivolous and somewhat interactive theatrical tomfoolery. It looks haphazard and unsophisticated but actually it is the result of careful, considered work, excellence in improvisation and a thorough understanding of the dynamics and attributes of each member of the performing troupe.

There are two things which set this troupe out as particularly impressive. Firstly, everything they do is done with the nearest audience member well within arm’s reach and either drunk, drinking or cheerfully acquainted with alcohol – everyone gets a shot of strong liquor to down upon entering the space and drinks are purchased and consumed (and encouraged to be consumed) throughout.

This means that, as the evening progresses, the unpredictability of the audience’s propensity to interject or even participate in the jocular thespianism increases proportionately with the extent intoxication of their blood stream soars. In a way, of course, this is truly Shakespearean – his audiences were capable of being vocal during performances and they could and did drink during them. In such situations, actors need to be at the top of their game, to avoid the momentum being lost, the narrative distracted or obfuscated and the audience from getting too boisterous.

Which brings us to the second point of differentiation. Ordinarily, a performer needs to be alert and watchful in improvisational situations such as this. But the unique complication here is that at least one of the actors starts proceedings by downing a series of five shots in rapid succession as the first step in his/her performance and, as matters progress, drinks more alcohol during the course of the evening. By the end of the night, that actor might have consumed enough alcohol to make a Rhino drop (particularly on a two show day such as I witnessed) but still be required to coherently and effectively deliver dialogue and react to the changing circumstances around her/him.

It is a measure of the actors’ commitment (or alcohol tolerance perhaps) how ably the myriad tasks can be performed coherently and engagingly, despite the constant interruption and consumption of alcohol.

The performance I saw featured five actors, four men and a woman, delivering a drunken summary of Macbeth. Despite all the shenanigans, and there were many, the general thrust of Macbeth was told with compelling clarity: those who did not know the story would not have been confused. More importantly, though, those who did could enjoy the silly antics used to embellish or point fun at Shakespeare’s text.

Key points which stick in the memory include: Duncan being chosen from willing audience participants prepared to pay real money to be crowned King; Lennox being reduced to glove puppet status, both a critique of the role and a clever solution to a problem caused by cast size; the moment the intoxicated Macbeth realised he was without his prop dagger as he was about to launch into the murder of Duncan; the debate with the audience about what name should be given to Fleance instead of Fleance because the actor objected to playing such a daftly named character (Denis was the solution); the spoof of Sleep No More; the final fight between Macbeth and MacDuff being a dance off.

There are impersonations, physical challenges, points of order, interventions, the odd massage or tongue kiss for audience members, actors trying to make other actors corpse or audience members blush. It seems like a free-for-all, but it is obviously a well rehearsed, well thought through endeavour. Set pieces within the bowdlerised text have clearly been precisely honed, but chance and the idiosyncratic response of a particular audience can hurl deft plans aside: here, for instance, Duncan’s need to urinate frustrated Macbeth’s plans for a while.

Some of the cast are clearly the watchers – intended to keep the wheels on. Caitlin Morris and Whit Levenberger performed those roles admirably, as well as playing a range of characters with finesse and glee. Other cast members are there to provoke, to mix things up, to create fresh comic possibilities. Josh Hyman and Damiyr Shuford enjoyed themselves enormously here: it will be some time before I forget Shuford’s Shakespearian Moondance.

At the heart of this particular show (one has the impression, perhaps wrongly, that different cast members play different central characters in different plays; that the lead performers rotate) Adam Thomas Smith was excellent. It takes good or great actors to convince as bad ones. Smith revealed his skill when delivering, as a challenge, Hamlet’s To Be Or Not To Be soliloquy.

The whole experience is good fun. It whets the appetite – both to see a production of Macbeth where the stakes are real and to see these actors in a production with a different, non-alcohol driven, agenda. Additionally, it makes you want to see more of these drunken Shakespeare devoted drunkards – if they could make Macbeth this funny, what could they do with Comedy of Errors?

FIND OUT MORE AT WWW.DRUNKSHAKESPEARE.COM