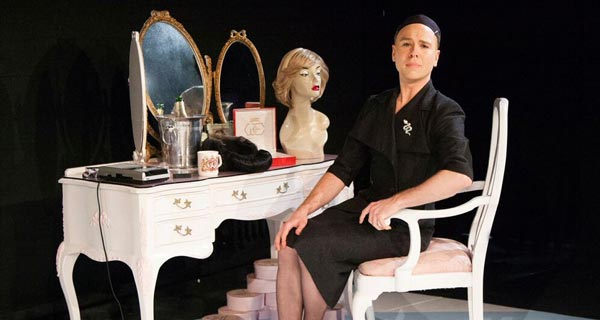 A pale blue chaise longue. A white and gold dressing table which would not be out of place in Versailles or Schonbrunn. Boxes of champagne truffles, some open, some not. A television set with a VCR player perched on top of it: it looks new, not anachronistic. Flowers – hydrangeas in pastel shades, wrapped in Pink paper.

On the chaise longue, a woman. She looks imperious, even in that state of unconsciousness that immediately precedes wakening, whether the unconsciousness is caused by alcohol or tiredness. Music is playing. From the twitching, it seems clear that the woman, who is impeccably dressed in black, a silver pendant pinned to her breast, does not approve of the music. She stirs, wakens, crosses the room, age and pain informing every step. She stops the music. She puts on a rather severe wig, which pins her to the long ago mists of the forties.

She returns to the chaise longue. She has chosen Tara’s Theme, from Gone With The Wind, as her musical alarm clock. Then, unexpectedly, she vomits. Expansively. Bright Pink vomit. As you notice her vomit matches her decor impeccably, she hurls abuse at an unseen maid.

This is Dead Royal, a one man show written, directed and performed by Christopher Ioan Roberts, and premiering at the Ovalhouse this week. It imagines a meeting between Wallis Simpson and Diana Spencer in 1981, prior to the latter’s marriage to the heir of the English throne. Wallis wants to meet to warn Diana off, to tell her not to lose her self in the Windsor machine. For her part, Diana wants to recover a particular set of pearls which Wallis took when the abdication made her and her husband flee England. That’s the set-up.

Roberts is immaculate in playing both parts: the sour, rotten, old Wallis who, despite her bitterness, wants to save Diana from the dreary drudgery of joining the monarchy; the shy, uncertain Diana, a mere child when it comes to the machinations of royalty, taking her cues from the gay coterie that surrounds her at the Palace and dimly thinking that a string of pearls might make her wedding a real event to remember.

The two characters have almost nothing in common physically and this gives Roberts enormous scope to flex his considerable comic and dramatic skills. Both characters are clearly delineated, both are very different. Roberts manages both effortlessly, and, indeed, surprisingly, the transformation from Wallis to Diana, which occurs directly in front of you, is remarkably riveting. Somehow his Diana is taller, thinner than his Wallis.

In a way, there are five characters here: Wallis, Diana, the off-stage help, Roberts and Roberts in transformative mode. By playing the characters but by also being his own presence, Roberts comments on the machinations of royal life in the harsh light of the media in intriguing and insightful ways. Because he is wearing a mask at all times, in itself that is a commentary on the life of both Wallis and Diana. The transformative aspect is ever present with the Royal family.

Once Roberts starts his work, it becomes clear that there are startling parallels between Simpson and Spencer, the two royal S wives who brought the monarchy to the brink of destruction, but for entirely different reasons. Both were demonised by the media, both had associations which were used against them, historically and personally (Mosely and Al Fayed), and both were, incontrovertibly, tragic.

Yet neither saw themselves as tragic and neither seemed to wear the burden of their husbands too gravely. Roberts’ savage humour, evident in the writing and heightened by his composed, off-hand delivery, highlights the differences and the similarities. And all the time, he makes a compelling argument, unspoken mostly, for the end of the Windsor line and the establishment of a republic.

This is subversive, imaginative and compelling theatre. It is unlike anything you have seen – and given The Audience is about to start again in the West End, this is compulsory viewing for anyone who wants that cosy perspective skewed, hyperactive and challenged. Perhaps the cleverest thing Roberts does here is ensure that Wallis and Diana never meet – an anti-Audience if you like – the anticipation and possibility is all there and once you have left the theatre, you can think about it for yourself. Endlessly.

There is a potent, desperately sad image at the end of the performance: Wallis, alone in the apartment, her life support apparatus heaving in the background, watching the television coverage of the wedding of Charles and Diana, pain etched in every pore. It’s a powerful, sobering moment of subtle reflection.

Unique and enthralling, this is a bravura turn from Roberts that is savagely funny and remarkably thoughtful and penetrating.

See it. Don’t hesitate. Roberts is a talent worth your investment.

Dead Royal runs at the Ovalhouse Theatre until April 25.