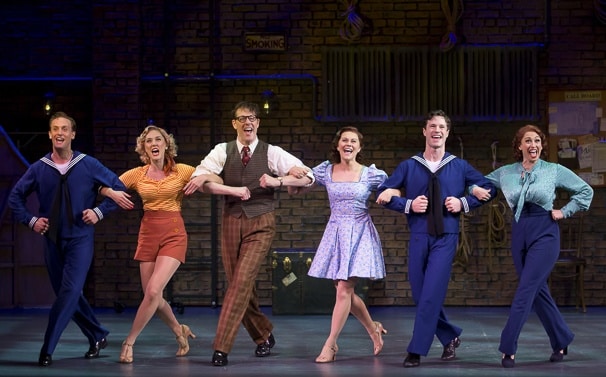 Tits, teeth, tapping, tunes, and tight trousers. If you wanted to sum up the essence of the first Broadway production of Dames At Sea, now playing at the Helen Hayes Theatre under the assured direction and choreography of Randy Skinner, then that 5 “T” phrase would be especially apt.

Dames at Sea, the work of George Haimsohn and Robin Miller (Book and Lyrics) and Jim Wise (Score), is well known as the off-Broadway hit from 1968 which launched the star of one Bernadette Peters into the Broadway stratosphere. It has been surprisingly absent from Broadway stages and this revival is a timely one, coming, as it does, amongst a season where Broadway houses are playing host to very serious and intense works (plays and musicals).

Because Dames At Sea may lay claim to being one of the silliest, sweetest, most ridiculous musicals of all time. It makes no real pretence at plot or character, preferring to stay firmly in the world of parody, emphasising great, catchy tunes, swell dance routines, risqué jokes, and gooey love affairs between showgirls and randy sailors which would make Roger de Bris call for a wrist massage.

And it’s terrific with a capital T.

The story is ludicrous. Broadway diva, Mona Kent, is rehearsing a new show on 42nd Street but isn’t happy. She is driving Hennesey crazy with her demands. The show is about to open, but Mona is not happy with all the numbers, the routines, or the chorus girls. A stranger turns up at the theatre, fresh off the bus, all wide-eyed and bursting with natural talent. This is Ruby, who wants nothing more than to sing and dance on Broadway.

Hennesey hires her; Ruby looks good and she can tap, and Joan, another chorus girl, vouches for her. But Mona wants her gone, as she is envious of Ruby’s looks and the cute sailor who has followed her from the bus station where she left her only suitcase behind. He is Dick and he is a composer and lyricist as well as a sailor. Oh, he can tap too.

Mona wants Dick, and not just for his musical abilities. But Dick won’t play ball unless Ruby is in the show. Mona pouts but agrees, determined to get all of Dick for herself. Meanwhile, Dick’s buddy, Lucky, gets lucky with Joan and they tap their troubles away. 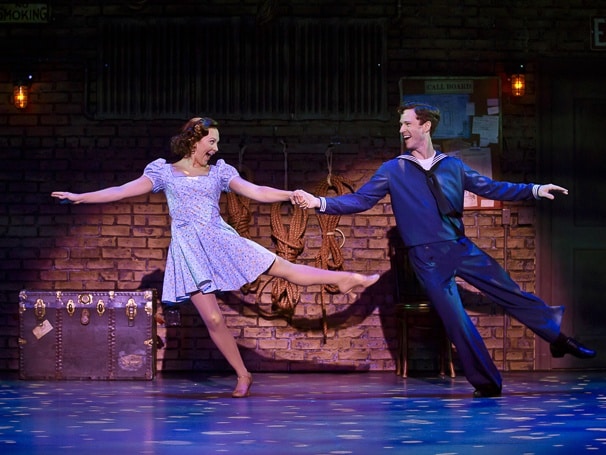 But Hennesey hasn’t been honest: the theatre where Mona’s new show is to be performed is about to be demolished. Where will the show open? Lucky and Dick think their battleship might be about the right place and as Mona is an “old friend” of the Captain, it seems a goer. But will Dick’s songs be ready on time? Will Mona let Ruby shine? Who will get Dick? Ruby or Mona? And will Joan get Lucky? And who will get the Captain’s ring on their finger?

These and other questions play out and are resolved over two and some hours of supreme silliness. If the Carry On Gang had made a musical, it might have been this one. It’s that sort of lower-the-tone have-a-tremendously-fun-time show.

Skinner ensures, with impeccable timing, and just the right level of cheese, that every bad joke lands, that the good jokes garner big laughs, that the dance routines are snappy and cute, and that sauciness, naivety, and vamp camp ensure an ebullient trifle, fruity, textured, and creamy, but never, ever, soggy. It’s a real treat for all palates.

The Helen Hayes Theatre, one of the grand old Broadway houses, is the perfect venue for this old fashioned, razzamatazz parody: it gently, and not-so-gently, pokes fun at the sorts of zany musicals that Hollywood produced by the score in the 1930s and Wise’s score is unabashed in its pastiche rip-offs of well known hits. You don’t need to get beyond the beginning of The Beguine here, to understand its inspiration.

The score abounds with terrific numbers: Wall Street, It’s You, Choo-Choo Honeymoon, Good Times Are Here To Stay, Let’s Have A Simple Wedding and, of course, the title song, Dames At Sea. You will be surprised at how many tunes you know, or think you know, from this delightful score.

The bit hit from the show, Raining In My Heart, is superbly done, and rightly stops the show. The delicious Singapore Sue nearly does the same but I did have a pang of remorse that the creatives found it impossible to present that song with faux oriental make-up and accents as originally intended. You would think a parody would be exempt from the tight strictures of political correctness but, in a land where productions of The Mikado are cancelled for fear of offending people, perhaps their decision was a wise one. One thing is for sure: the number still works it’s magic, as does the scene. I am still chuckling about “seeing your orient pearl” and “showing you my oriental junk”.

The eight piece band, under the firm control of Musical Director Rob Berman, provides outstanding support for the singers, and the entire orchestral feel of the musical is spot on, perfectly pitched. The beats are strong and true, the rhythms catchy and delicious, and the balance spot on. This is one of those rare occasions when you can hear every note sung truly as well as the texture of the accompaniment underpinning it. Joyful.

There are only six actors on stage, which may seem odd for a Broadway musical (no one expresses qualms about a two hander play like The Gin Game) and, indeed, at times, it did seem as though another twelve dancers might be useful. However, the point of the parody here is to do what the big Busby Berkeley movies of the time did but with one-tenth of the cast. And this powerhouse cast of six certainly deliver in that respect.

Her (almost) solo tapping opening number, Wall Street, evokes 42nd Street clearly, but Lesli Margherita delivers all of the powerhouse punch of a full opening chorus line. She has a voice that reminds of Ethel Merman, legs that can, and do, do anything, and a caustic line in demanding Divalicous behaviour which would give Joan Collins a run for her money. Sassy, sexy and sour, Margherita’s Mona is an original cocktail, full of body, and with a serious kick-line possible after every fun mouthful. 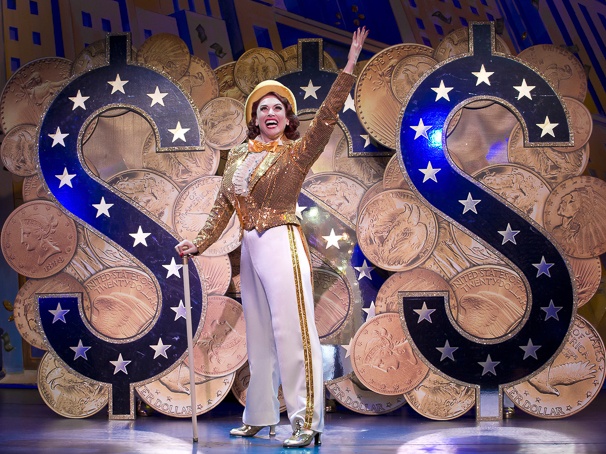 As the terrifically naive Ruby (complete with red tap shoes) , the terrific Eloise Kropp is a true find. She is beautiful in every way, can dance up a tornado, and can sing sweetly or with force enough to knock down walls. Her unaffected ingenue appeal is as warm as Apple pie, and she can demonstrate trust and fear just as easily as firm resolve. It’s a joy to hear her give fresh life to the songs, and her delivery of Raining In My Heart was precisely right, echoing the famous moment from Singing In The Rain, but also marking it out as her own.

Kropp is full of energy throughout, but is especially impressive in her Flash-like tapping sequences. She has an infectious, open smile which would sway the most curmudgeonly of spirits. She needs a softer, bouncier wig, one that emphasises her freshness and sets her apart from the veterans, Mona and Joan. Her agile face needs releasing in a rush of lush, freer locks; at the moment, it is slightly too pinched for the naive freedom Kropp’s Ruby would relish.

Playing the salt-of-the-earth, experienced, sexy, and capable-of-revealing-a-secret-to-save-the-day Joan, Mara Davi is perfect. With extraordinary legs that seem to never end, Davi is an accomplished and impressive Broadway showgirl capable of any routine and delivering any song. She is funny, sultry and utterly charming in every way.

Cary Tedder (Dick) and Danny Gardner (Lucky) are as able-bodied as one would expect tap-dancing sailors to be, trim, taut and tirelessly terrific. Both exude charm from every pore, have great voices, and nimble style: they are perfect for this sort of material, warm and open.

John Bolton plays two roles: Hennesey (the old Broadway stalwart) and The Captain (the old Battleship Romeo). He seems ideally suited for both, but then confounds by working too hard (particularly in the screwy face and loud, very-odd noise departments) and, consequently, misses opportunities for natural laughs. Still, he has a great voice and an easy, assured manner and is, by no means, out of his depth.

Across the board, the production values are exceptional: everything looks perfectly tacky, sweetly silly. Skinner’s vision is consistently fulfilled by the other creatives: splendidly sparkly costumes from David C Woodland, marvellously appropriate and flimsy sets from Anna Louizos, and cheesy but cool lighting from Ken Billington and Jason Kantrowitz. Add the cast, and its an aural and visual treat across the board.

BOOK TICKETS FOR DAMES AT SEA AT THE HELEN HAYES THEATRE