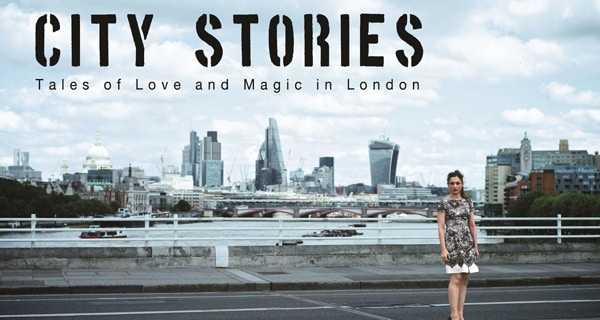 City Stories, sub-titled ‘Tales of Love and Magic in London’, is a growing portfolio of short plays, now six in total, a selection from which may be performed in different combinations to make a single evening. (On the evening I attended the plays were, Narcissi, Occupy, Lullaby, and Carousel). The plays are linked and punctuated by Rosabella Gregory’s evocative songs performed onstage at the piano. All are set in, evoke and evince London’s ‘spirit of place’, and in different ways ruminate about the challenges, pains and joys of being in love. More precisely the characters offer a series of meditations on how our emotional engagements to other people force us to reflect harder and closer about the make-up and contradictions of our own personalities. In each case the lead character encounters and falls for someone else whose presence and role in the story is slightly to one side of ordinary life; someone who stands with one foot outside reality. This serves to create a dreamy, ruminative space, not exactly fantastical in which all kinds of urban possibilities and outcomes can be imagined both by the characters and the audience, before we return again to everyday London at the conclusion, with our boundaries pushed back just a little. We are reminded that every day in the city we are given so many chances to embrace or reject life. This space is colonized texturally with the plangent, arpeggiated, mostly wistful songs enacted by Gregory, and plenty of deft musical underscoring along the way, with sound cues that delicately enhance the already rich text in a way that evokes the world of early black-and-white movies. Moving between the smoky ‘around-midnight’ world of cabaret, the in-depth quirky monologues that remind you of Bennett’s Talking Heads, and a sense of the random, unexpected nature of urban encounters, I wondered initially whether this sequence would work better on radio where the listener is forced to join up the dots imaginatively; but it is a tribute to the quality of the acting and music-making on show here that these short plays drew the press night audience in further and further until we were totally wrapped up in their world of intense, off-kilter, commitments and experiences. If this is a new genre of ‘theatre-cabaret’, as some reviewers have suggested, then I would like more of it!

This therefore is work at a sophisticated creative level, where everything depends in a very pure, basic sense on the players themselves. There is no scenery, only a few hints at costume – a hat or a coat here and there – and some chairs where needed. It’s worth stressing too that the St James Studio, with the stage shunted off to one side to accommodate a bar, is not the easiest place to reel an audience in collectively. There are too many awkward angles and levels to play to, and the stage space available is tiny. Great credit then to all the players and to James Phillips for his direction, quite apart from his luminous yet precisely calibrated writing.

After a mood-setting introductory song on the ubiquity of story-telling with the roll and swell of the Thames in the piano part, we come to Narcissi, a more-or-less monologue where Natalie (Sarah Quintrell) recounts how her life was changed when she was playing the open piano at St Pancras Station. A man called Jack (Tom Gordon) approaches her, puts all his money in her hat and proclaims that she is the answer to the riddle of life. How do you deal with someone who confronts you with implacable adoration and devotion? Run away, or take a risk and become ‘pilgrim souls’ together? This is the first of the several instances in these plays in which someone who seems other-worldly forces the narrator to confront and reconcile contradictory elements in her own personality. The play crystallises around another song, ‘The Secret Garden’, where the couple meet at regular intervals throughout the rest of their lives, led both apart and together, a scene that is both unreal and yet probably happening in front of us every day as we walk through the parks in the centre of town.

In Lullaby, Audrey (Daphne Alexander) finds that the city is going to sleep around her. Not in a sci-fi fashion, but just an exploration of what might happen in London if everyone simply started sleeping an hour longer. Audrey’s friend Rachel (Sarah Quintrell) falls asleep in a film and can’t remember the ending, and from there on Audrey finds gradually all her friends slipping away from her while she remains the same: ‘we went away to that dark dreamland as if it were the destination we had always secretly desired, as if the waking world, the world of difficulty, and contradiction and pain had always been too much for us.’ There is an exceptional section describing a walk through a deserted central London, a passage that reminded me of Virginia Woolf’s eerie description of walking through London in the Blitz. Then we modulate into a realization that the sleeping sickness is really a metaphor for how in daily life we are much of the time mentally asleep in the sense of giving up on our dreams and letting our ideas slip away in the dark. Audrey determines to keep faith with her dreams and the play closes as she tries with no guarantee of success to awaken her former lover Joe (Tom Gordon). Alexander’s role here is hugely demanding and this is a really finely judged, cumulative performance.

Occupy is the pick of the plays, a gem of a piece of writing, which builds character with precision and economy from the most unlikely and unpredictable of beginnings. Mark (Scott Handy) is a member of a secret group that work in a secret basement of St Paul’s Cathedral where he collates and preserves all the manifold letters written to God over the centuries. In another moment of confronting transformation, Ruth (Daphne Alexander) asks for her letter back. Quirky, witty, wry in a recognisably Anglican way, this is the play closest in tone to Alan Bennett but taking the characters in very different and upbeat directions. Ultimately it is about coming to life and love in middle age with the ‘heart yearning to spin into motion, into freedom and release.’ Mark rebels, retrieves the letter, and then both of them are catapulted into wholly original act of world-embracing rebellion that seeks to bring new hope to thousands of people all over London. The ending is spectacularly unexpected and liberating – a triumphant assertion of the truth that ‘faith steps in when all facts fail’, without a hint of piety or churchiness. There are huge issues in the background, beyond full treatment in a short piece; but this is all sketched in with the deftest of charcoal touches.

In Carousel, the most recent addition to the stories, George (Alan Cox) and Lucy (Louisa Clein) meet under the towers of Canary Wharf when she catches him singing her favourite song. He is an ambiguous, flat-capped, timeless bystander, engaged in what he calls ‘trainspotting for the soul.’ He persuades Lucy to join him in a search for a woman to whom he wishes to propose. The scenes open up into an exploration of the dimension of time in the City, not so much time travel as an enhanced awareness of the urban moments and memories when so has depended or still hangs on a decision or choice one way or another. Lucy gets to experience ‘five minutes the day never had’ with the love of her life, and along the way discovers she is now both more and less than she thinks. Lest this all sound rather pretentious, I can reassure you that there are many grounding touches of finely observed humour, together with the best, most soaring full-throated of Gregory’s songs – full of unexpected harmonic shifts and whispered running figures that take us down again into the river from which we began.