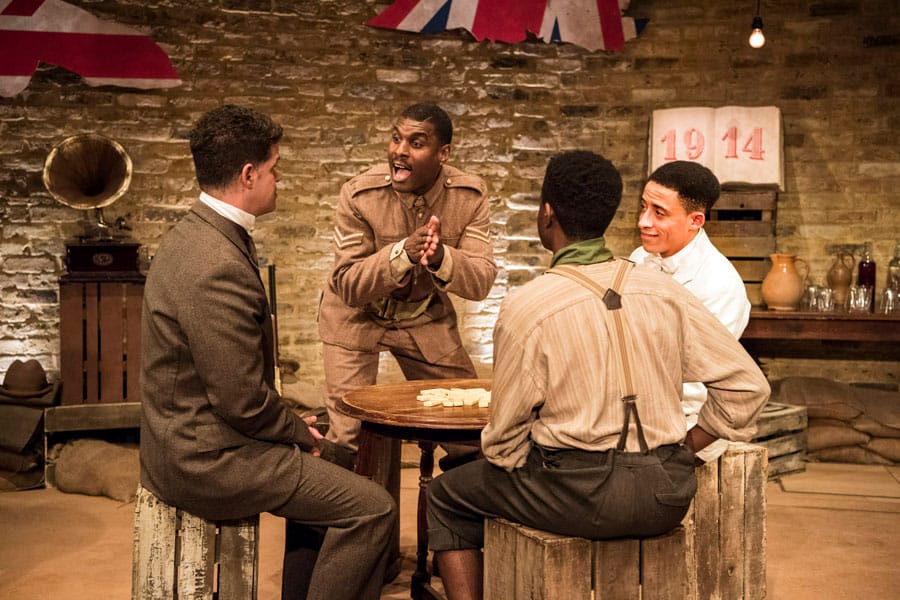 Patricia Cumper’s Chigger Foot Boys is a thought-provoking tale that winds itself around five strangers, brought together by a fateful game of Dominoes in a rum bar in Kingston on the eve of the Great War. The story then jumps from the boozy present to the future where their lives interlink again, often with tragic consequences. The perspective feels fresh and the characters are beautifully portrayed by this small ensemble. However, the laid-back pace (although in-keeping at the start of the play) begins to drag and fails to fully support the shocking and heightened drama as events unfold.

Suspended over the bare brick of the Tara Arts theatre hang two cut-outs with the Union Jack emblazoned across: the recognisable silhouettes of The British Isles and Jamaica. Crates and sandbags are strewn over the playing space and the audience are arranged intimately on three sides. Naked light bulbs hang starkly above the stage as the actors drift on singing a haunting unaccompanied verse of Land of Hope and Glory. A large book is opened revealing a date and informing us that it is 1914 but Dominique Le Gendre’s soundscape and Kevin Treacy’s warm lights are unmistakably Jamaica. 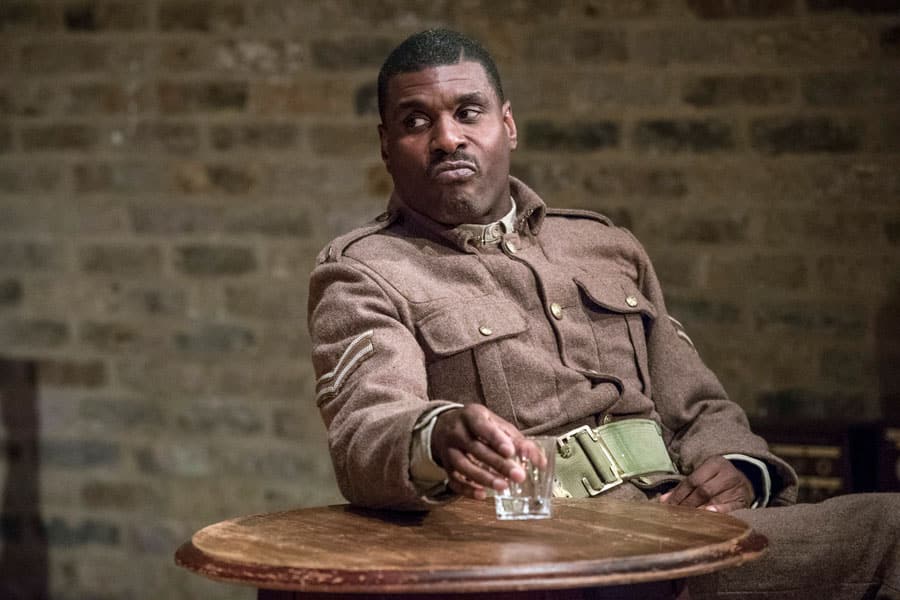 Slowly we are introduced to the tiles, or players in this game; the whip-smart proprietress Medora (Suzette Llewellyn) with tongue as hot as a “scotch bonnet,” her broad-shouldered admirer, the staunch Soldier Linton (Stanley J. Brown), two middle class brothers; the academic Norman (Jonathan Chambers) and his charismatic younger brother Roy (Josh Leader) and the youth to whom the title of the play refers, Mortimer the Chigger Foot Boy (Ike Bennett). The cast is rounded off by Matthew Truesmith as a variety of Officers, Beadles and the like. The actors support each other well and use traditional Jamaican songs and percussion to segue between scenes. It’s a lovely trope which lifts the weighty subject matter.

A downpour of rain on the tin roof signals they’ll be stuck there for the foreseeable future, and as they set about enjoying Medora’s homemade brew they pass the time predicting outcomes of a potential world war. With the turn of a page we jump forward in time and Cumpton explores the uncomfortable relationship between Britain and the “outer wheel,” of its Empire. Medora is an advocate of the great Jamaican political thinker Marcus Garvey, and there is a ripple of uneasiness among the diverse audience when Linton refutes that, as a Jamaican, he feels no affiliation with Africans: “We were chosen because we think like Englishmen.” Norman similarly loses faith, and his beloved brother to the “masticating maw,” as he rails in his Oxford apartment at the machine of war and futility of it all. However, the failure of the “motherland” to protect its children is no more shocking than in the narrative of Morty, who even after earning commendations is court-martialled and executed “as an example” for standing up to racist abuse within the military. 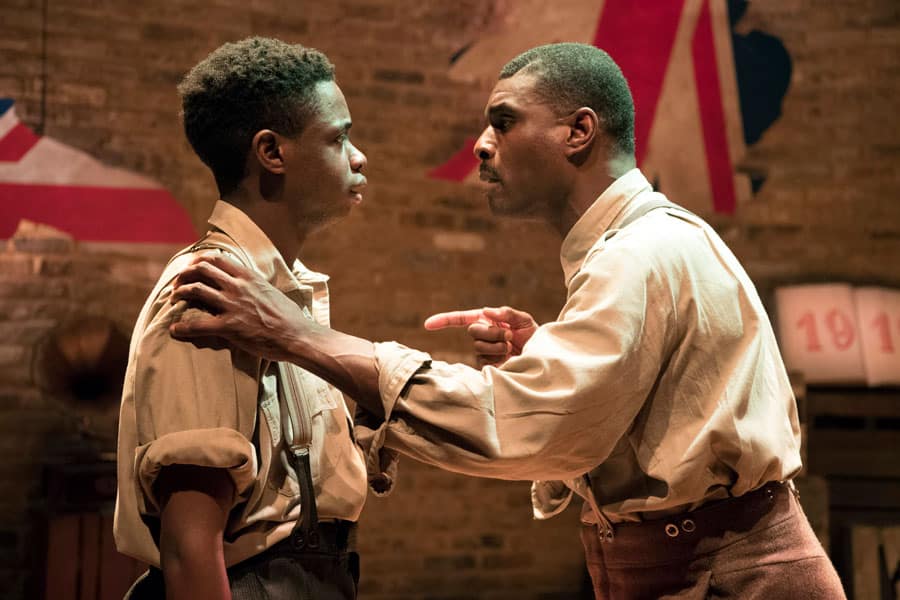 It’s a harrowing evening, made all the more depressing by the knowledge that Cumper’s poetic script is a narrative woven from true events. It also serves to remind us that the Great War was a world event, one we Brits too often want to distil into Journey’s End, War Horse, Sassoon and Blackadder. Chigger Foot Boys is of such cultural significance because it places people of colour firmly in a period context as opposed to the all too frequent gritty, urban dramas. Pace, a few line fluffs and some questionable accents are the only issues prohibiting this from being a truly brilliant piece of theatre. I sincerely hope it gets the chance to settle and tour to share these stories with a wider audience. The image of Linton and Medora waltzing together by the light of the gas lamp to the sound of the crackling gramophone will stay with me forever.