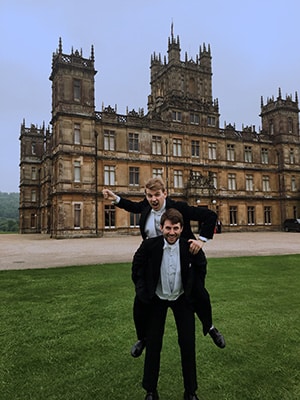 Branded as the “raffish cabaret duo that Downing St tried to censor, until their jazzy tunes had the PM dancing in his socks”, Bounder and Cad are two late twenty-something Brits, who in the style of Fascinating Aida and Kit and The Widow, are making their mark on the London cabaret scene with humour that had their audience at The Pheasantry laughing along on a rainy Saturday night in London.

There is no doubt that their highly comedic takes on current affairs, politics and the British psyche not only hit the nail on the head but well and truly hammer it into the framework of the British establishment. Opening with their celebration of the playboy prince – Prince Harry to the tune of Prince Ali from Disney’s Aladdin, the boys showed their laser-sharp wit. Their closer Greece Frightenin’! had Merkel and Tspiras negotiating a Greek bailout was a hoot. Bounder’s take on Merkel, had most of us in tears of laughter.

Some of the material presented throughout the evening is eclectic in nature, a cheesy love song (literally), a song about an amorous whale, and a version of Debussy’s Clare de Lune overlaid with A Nightingale Sang in Berkeley Square, which I found slightly angular, but enchanting to listen to nonetheless.

Pianist Comeau, keeps the pace nimble and the accompaniment sparkles throughout. In a space like the Pheasantry, it would be easy to overcome the act, but Comeau sits comfortably alongside the boys, providing perfect accompaniment throughout.

It all comes from a very British sensibility, humour which aims at having you laugh with them, not at them, and a very tongue in cheek relationship with each other that makes you feel like you are in on the jokes throughout.

I look forward to seeing what new material these two scoundrels come up with over the coming year as Brexit encroaches and as they dig further into the British psyche.

As for the song that was censored by Number 10, the song that had Bounder and Cad labelled as Britain’s answer to Pussy Riot, the clever take on the Cameron/Clegg partnership was witty, with some great counterpoint that had me wanting more.

FIND OUT MORE ABOUT BOUNDER AND CAD