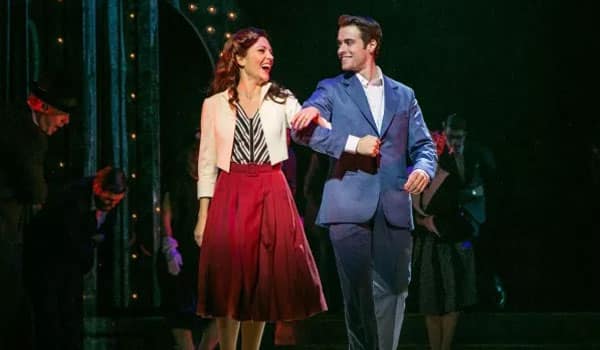 It starts in darkness. Loud thumping sounds, slightly indistinct, shatter the atmosphere. Bright, harsh lights briefly illuminate the stage. Two men are bunkered down, huddled together, fear and apprehension binding them. Soldiers. A war zone. The explosions are mortar shells or grenades. Deadly. As the light of the continuing explosions peppers the terrain, there are other soldiers spotted.

The lightning-like effect focuses attention on both the two huddled soldiers and something else. A piano. Just there, slightly ahead of the men: Perhaps their goal? Perhaps the encapsulation of what they are fighting for? Perhaps a vision they are holding onto? Or, as it eventually turns out, all of that and more. Another strobe of light. Another explosion. Darkness again.

So begins The Bandstand, a new musical now playing at The Papermill Theatre. Completely original musicals are rare these days. Usually, more and more often it seems, producers look for a well-known book, film, play or back catalogue of hit tunes (sometimes combinations of these elements) to provide a familiar or “reliable” foundation for an adaptation musical. Matilda, Fun Home and Mrs Henderson Presents are recent examples.

Where the aim is sheer entertainment, or downright silly fun, completely original works get more support, as Something Rotten and The Book of Mormon readily demonstrate.

But it is far rarer to find a wholly original work of musical theatre, which tells a complex, engaging story set against real events, which focuses on entirely original fictional characters, and which boasts an entirely original score that thoroughly evokes the style and feel of the music of the era in which the action is set.

Far rarer still to find such a work which offers many terrific parts, which is stuffed with insight and true heart, which makes one laugh and cry with delight, and which carries a strong political message. Still more rare, such a work where, as soon as the curtain falls on the second Act, you want to listen to all of the music again immediately. And buy a ticket to see the show again. 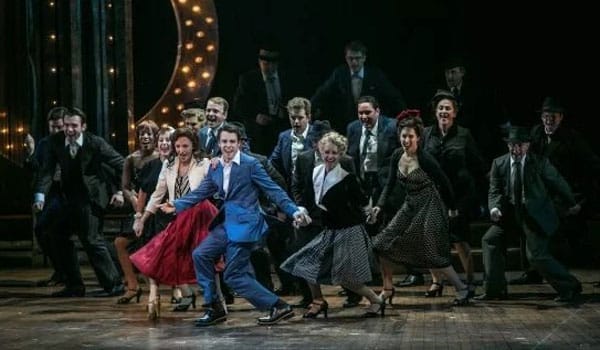 But there it is. The Bandstand (Music by Richard Oberacker, Book & Lyrics by Robert Taylor and Richard Oberacker) is such a show: an unqualified triumph in every way, beautifully written, superbly directed, immaculately performed, and consummately engaging and absorbing. And it hasn’t made it to Broadway yet – despite its quality, the creatives are still tinkering and amending, determined to polish this diamond to sparkling perfection. They don’t have far to go, for already this production of The Bandstand is better than most of the current musicals offerings on the Great White Way.

Director Andy Blankenbuehler has achieved something remarkable and electrifying here. Together with David Korins (Scenic design), Jeff Croiter (Lighting design) and Paloma Young (Costume design), Blankenbuehler creates a theatrical language and feel which is seductive and powerful. At most times, the sense of theatre, music and war co-exist, permanently reminding of the scars of battle borne by the musicians whose story lies at the heart of the musical. Occasionally scenes or vignettes jolt you from the happy place of clubs and nightspots swinging and evoke a world of dog tags and distress. It’s smoothly and smartly done; perfectly executed.

The story centres around Donny, who returns from the Pacific theatre of World War II shaken by the loss of his best mate but determined to make it big in the music world. Donny promised his mate, Mike, that if anything happened to Mike, he would look in on Mike’s wife, Julia. But he can’t face it and doesn’t keep his word, focussing instead on his music.

A national competition spurs him on. If he can win it, there will be a motion picture in which his band will star. The competition has a patriotic flavour and so he hits upon the notion of finding players who are all ex-servicemen to constitute his band. Through connections, he finds a crack team of gifted musicians, all of whom, one way or another, are deeply troubled and affected by their personal wartime experiences. But together they can really play, really swing.

Eventually, Donny looks up Julia who turns out to be a terrific singer and lyricist, not to mention breath-takingly beautiful. A friendship forms, fanned by the enthusiasm of Julia’s mother, Mrs Adams, and strengthened by their joint love for Mike. With Julia’s help, the band takes off and finds itself in real contention to win the prize. 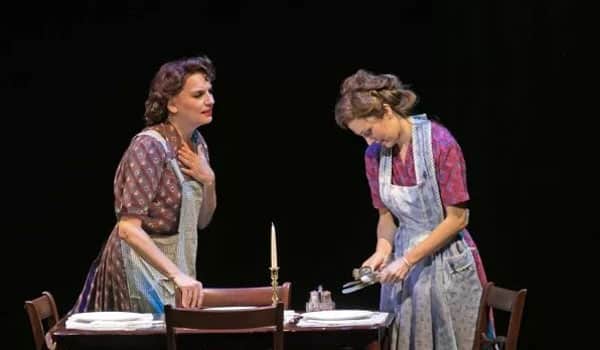 But this is a musical, so there are many obstacles along the way, but also some nice surprises, and a twist at the end of the show which is a belter. The strength the band find and have for each other is profound and imbues the action with undeniable joy. Each band member has their own haunted memory, their own secret, their own scars, but together, through the music they make, and the care and love each brings to the others, they triumph in unexpected ways.

I can’t recall a piece of musical theatre with such vibrant, intoxicating surface beauty and melody, but which deals with such difficult and controversial matters: post-traumatic stress disorder; the callous way servicemen are treated by the governments that send them to war; the brutal deception of media industry power brokers. The trick here is that the individual characters who square off to these big issues are so multi-faceted and complex that the messages, important as they are, are inextricably wound up in their journey of discovery. There are no easy answers, just faith, music, care, laughter, and the indomitable human spirit.

Corey Cott is almost unbelievably good as Donny. Practically constantly onstage throughout the piece, Cott brings masculine charm, affable rakish appeal, a driven sense of musical adventure, and Hollywood glamour and showmanship to every aspect of his performance. He is a superstar here in every way.

It would be easy to make Donny a cocky, macho loudmouth with talent and an ego the size of Saturn, the kind of character endlessly trotted out in movies. But Cott, while playing with all those tropes, never lets go of the scars of the war, the loss of Mike, his feelings of guilt – he shows Donny as driven to atone, both boyish and man-like, on safe ground but in peril. In his singing and dancing, Cott is consummate and beguiling, (he is irresistible throughout, but especially leading Right This Way at the end of Act One) but it is the depth of acting which propels this performance out of the park.

There is a sequence where Donny is playing the piano while Julia sings. Cott says nothing, but his face and eyes convey a thousand words. At a other point, he has a song outside a hotel room, Give Me A Reason, which is a masterclass of subtle, aching beauty, immaculate control. Passion and pain propel him throughout. Cott gives the kind of performance which on its own is enough to demand attendance at the theatre.

But he is not on his own. Far from it. Across the board, the performances here are first rate in every respect, and all the more impressive because the main principals have to properly play Big Band instruments, as well as sing and act. None fall at any hurdle. 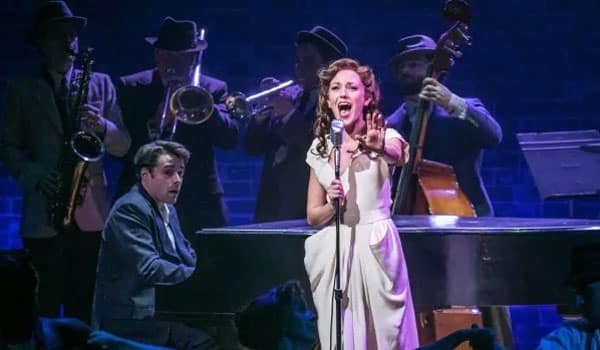 As Julia, Laura Osnes is perfection. Her voice is warm from top to bottom and she is superb in the big, belty numbers as well as the more intimate musical passages. She sings with unquestionable beauty, and manages the full range of Julia’s emotions – coquettish fun with a ukulele, awkward courting of sorts, to heart-wrenching grief when Donny finally confesses how her husband met his end in the war. It’s a beautifully judged performance throughout, full of passion and grace. And her final delivery of Welcome Home is one of those blistering, unforgettable moments of musical theatre history – right up there with Rose’s Turn.

In a way she is still a chaperone here, but there is nothing drowsy about the warm, tender, and just glorious performance the gifted Beth Leavel gives as Julia’s mother, Mrs Adams. Open, honest, dealing with her own grief, Leavel is mesmerising. Her anthem in the second Act, Everything Happens, is inspirational, not just for how Leavel sings it (unbeatably) but also for the way it encapsulates the hopes of all of the characters, and the redemptive power of music. Heart-stoppingly good.

The men in Donny’s band, who come to be his brothers in music, are uniformly terrific. Brandon J Ellis, James Nathan Hopkins, Geoff Packard, Joe Carroll and Joey Pero – each sharply and surely defines their particular ex-serviceman musician and, over the course of the show, without labouring the issue, are healed by their music-making and establish utterly believable friendships. For each, the journey from I Know A Guy to Welcome Home is idiosyncratic, tense and edgy – but always comprehensible and frequently very amusing. Musically, they are terrific and when their band swings, it really swings. Sheer delight.

The score contains many gems: Will That Be All?, You Deserve It, Where’s The Harm In That?, Worth It, Right Away, Nobody, and the truly sensational Welcome Home. In truth, though, there is not a dud number here; every song progresses the plot or characters and has its own musical fizz and zest. This is music that people will want to sing and dance along with. Fresh and overwhelmingly delightful; fun mostly, but in parts deeply affecting, sublimely touching. This should become known as one of the great scores of the 21st Century.

Blankenbuehler choreographs as well as directs and the result is that dance is as much a part of the fabric of the storytelling as the singing and acting. The company are precisely drilled and the big set pieces are full of delicious, engaging steps. Corey John Snide stands out from the ensemble, particularly in the dance sequences: his virtuoso execution is superb. The dancing aids the “Big Band” feel of proceedings and always feels integral, not grafted on.

This is a masterpiece of musical theatre. It operates on many levels at once, and succeeds on all. Even the title has duality – the piece is about getting to the Bandstand, but, just as much, about the Stand the Band finally takes.

Powered on hope and driven by music, it will make you feel glad to be alive.

The Bandstand runs at Papermill Playhouse until November 8, 2015